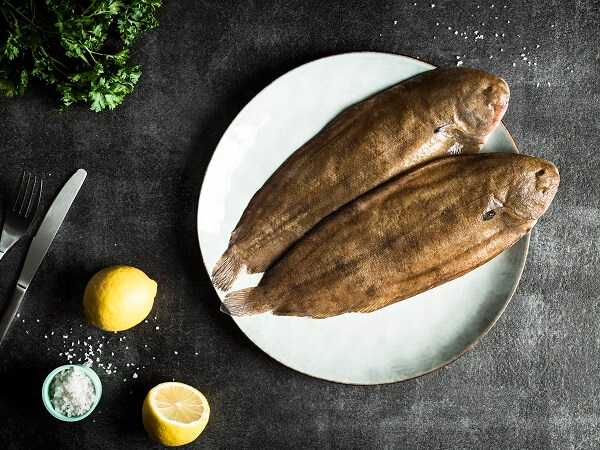 (The Life of a Common Sole)

The Solea solea species of the Soleidae, (flatfish) family gets its name from the Latin word for sandals. It is sometimes called the Common Sole but, most famously it is known as Dover Sole.

The Dover Sole takes its name from the fact that the British fishing fleet out of Dover supplied more of this highly desirable fish to the Billingsgate fish markets than any other. The Dover Sole likes the warmer waters south of the British Isles, the English Channel, Irish Sea and southern parts of the North Sea. Some claim the best quality are caught off the Bay of Biscay. A right-eyed flatfish with its mouth on the left, Dover Sole lives in shallow sea beds of sand and shingle. Interestingly, this unusual delicacy is born as a normal fish with an eye on each side of its head, only to undergo a strange metamorphosis -where the left eye moves over onto the right side of the body- once they reach about 1 cm long. Sole grow to a maximum length of about 70 centimeters long and are quite thick and plump for a flatfish. The Dover Sole takes between 3 to 5 years to reach full maturity, smaller fish are called a ‘slip’. Slip fried in butter is a popular dish in the Netherlands. Sole are a grey/brown, mottled and darkish colour on the top side, with a white underside, they have small eyes and mouth, a long fin running down the top and bottom of their body, and a small tail fin. Technically, they lay in shallow sea bed on their side, with their two eyes on the upward-facing side of their body.

The Dover sole is famous for its delicate taste and firm texture, it is sometimes described by chefs and food critics as a meat-eaters fish, and is the fundamental ingredient in perhaps the finest and most acclaimed seafood dish in the world, ‘Sole Meunière’. It turns out that this glorious dish is rather straightforward dish to prepare, just so long as you have the right sole fish, (Dover) it is fresh and it is treated with a venerable amount of respect. For a fish sometimes referred to as ‘Common’ it is anything but, and it will often be the most expensive seafood dish on the menu. Whilst there are other sole-fish species, (that sometimes borrow the name) it is only the ‘Dover’ Sole -from the coastlines around Britain and the English Channel- that produce a dish of such exceptional refinement and joyous palatability.

The French term Meunière means miller in English, (as in flour miller) which refers to the fish being coated in flour prior to cooking, this protects its texture and enhances its flavour, by creating a delicate brown coating when frying the fish. The Sole Meunière is then cooked in clarified butter, seasoned, and served with parsley and lemon juice.

It is known to have been a favourite dish of France’s ‘Sun King’, Louis XIV, (1638-1715), and whilst there is no definitive history of the dish, its simplicity alone suggests that it is probably very, very old. 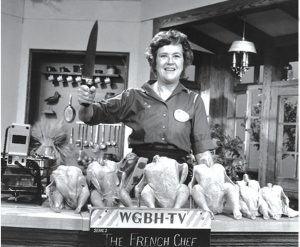 In 1951, whilst living in Paris, American chef Julia Child graduated from the famous ‘Cordon Bleu’ cooking school and later studied privately with Max Bugnard and other master chefs.

She joined the women’s cooking club ‘Le Cercle des Gourmettes’, through which she met Simone Beck, who was writing a French cookbook for Americans with her friend Louisette Bertholle. These three began to teach cooking to American women in Child’s Paris kitchen, calling their informal school ‘L’école des Trois Gourmands’. Their book, ‘Mastering the Art of French Cooking’ was first published in 1961 and was an instant best-seller, the book is still in print today and is considered a seminal culinary work.

This opened up further opportunities for Julia Child, who went on to write for newspapers and magazines and started her own television show ‘The French Chef’ in 1963. The show would run for ten years and collected many awards, it was extremely popular with American housewives of the day, who made Child a household name. 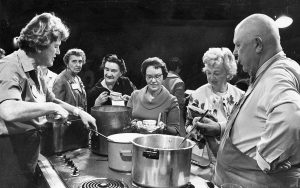 Julia Child would go on to write many more bestselling cookbooks, and star in many more cooking shows for television. A precursor to the celebrity chefs of the current era, and people like Martha Stewart, Child was the most famous culinary personality in the United States who, at the peak of her career was one of American television’s biggest stars. Such was her fame, that today her, (actual) home kitchen sits on display in the Smithsonian Institute’s National Museum of American History.

Long before all the cooking fame started, when Child first moved to France with her husband back in 1948, they had traveled by sea, (a rough one apparently) and docked at Le Harve. Driving themselves to Paris, they stopped along the way for what would be their very first meal in their new homeland. 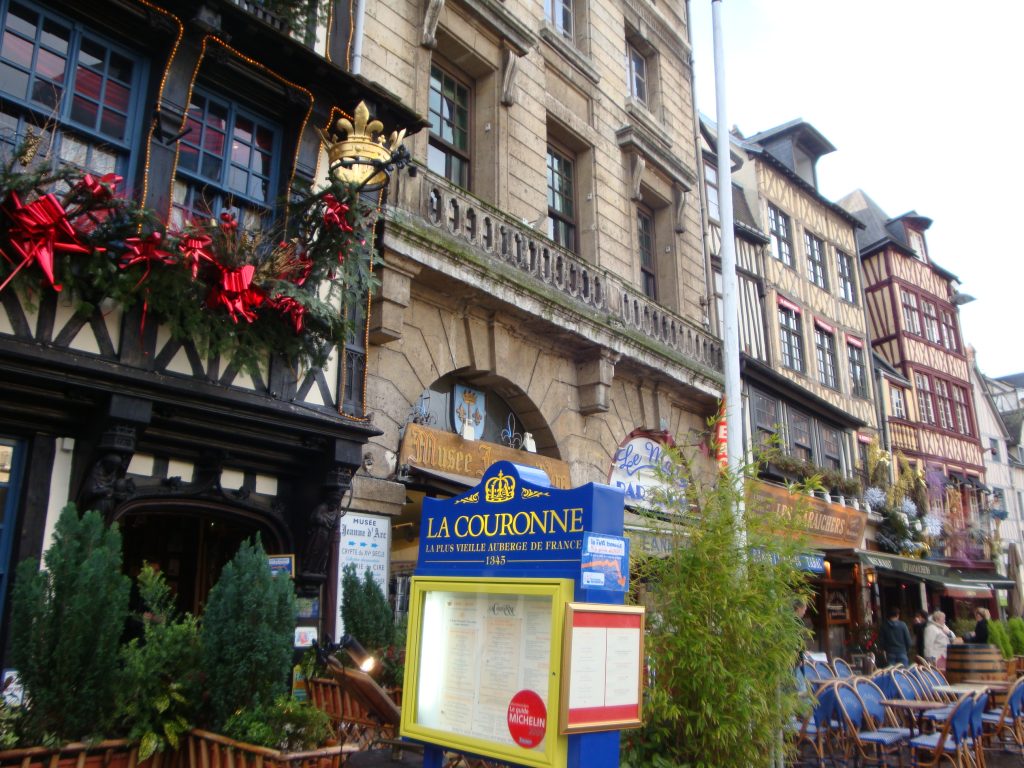 The couple pulled into La Couronne in Rouen, Normandy, up until then Child’s husband -himself a well-traveled gourmand- had been teaching her a great deal on how to appreciate good food, fine wine and the art of the table; after this meal, nothing in Child’s life would ever be the same again. The experience had such a profound effect on Child that she wrote about it many times, re-counting it in great detail, and describing it to the New York Times as “an opening up of the soul and spirit for me”, she would later recall in her memoir “at La Couronne I experienced fish, and a dining experience, of a higher order than any I’d ever had before’.

Yet it almost never happened:

“At twelve-thirty we Flashed into Rouen. We passed the city’s ancient and beautiful clock tower, and then its famous cathedral, still pockmarked from battle but magnificent with its stained-glass windows. We rolled to a stop in la Place du Vieux Marché, the square where Joan of Arc had met her fiery fate. There the Guide Michelin directed us to Restaurant La Couronne (“The Crown”), which had been built in 1345 in a medieval quarter-timbered house. Paul strode ahead, full of anticipation, but I hung back, concerned that I didn’t look chic enough, that I wouldn’t be able to communicate, and that the waiters would look down their long Gallic noses at us Yankee tourists.”

Anxiety overcome, they enjoyed a menu of:

Ms. Child’s famous and oft quoted comment on the Sole Meunière is now an historical record that has assured this dishes enduring fame in her native country.

“It arrived whole: a large, flat Dover sole that was perfectly browned in a sputtering butter sauce with a sprinkling of chopped parsley on top. The waiter carefully placed the platter in front of us, stepped back, and said: “Bon appétit!” I closed my eyes and inhaled the rising perfume. Then I lifted a forkful of fish to my mouth, took a bite and chewed slowly. The flesh of the sole was delicate, with a light but distinct taste of the ocean that blended marvelously with the brown butter. I chewed slowly and swallowed. It was a morsel of perfection.”

Julie & Julia, is a 2009 American biographical comedy-drama starring Meryl Streep. The film contrasts the life of chef Julia Child in the early years of her culinary career with the life of young New Yorker Julie Powell, who aspires to cook all 524 recipes in Child’s cookbook in 365 days, a challenge she described on her popular blog, which made her a published author.

Ephron’s screenplay is based on the two books: ‘My Life in France’, Child’s autobiography written with Alex Prud’homme, and a memoir by Powell, Julie & Julia: 365 Days, 524 Recipes, 1 Tiny Apartment Kitchen (later retitled Julie & Julia: My Year of Cooking Dangerously).

The film recreates a fictionalized version of that transformational moment the Sole Meunière was served to Julia Child, (Streep) and is a touching, poignant, and beautiful moment well worth a watch, https://youtu.be/Gv6PFJlqoZg

It has been said that it was this single moment, this single dish that transformed Child from being a person who enjoyed fine food to a person that wanted to cook fine food, and therefore we owe thanks to Sole Meunière for making America a much more palatable place today. 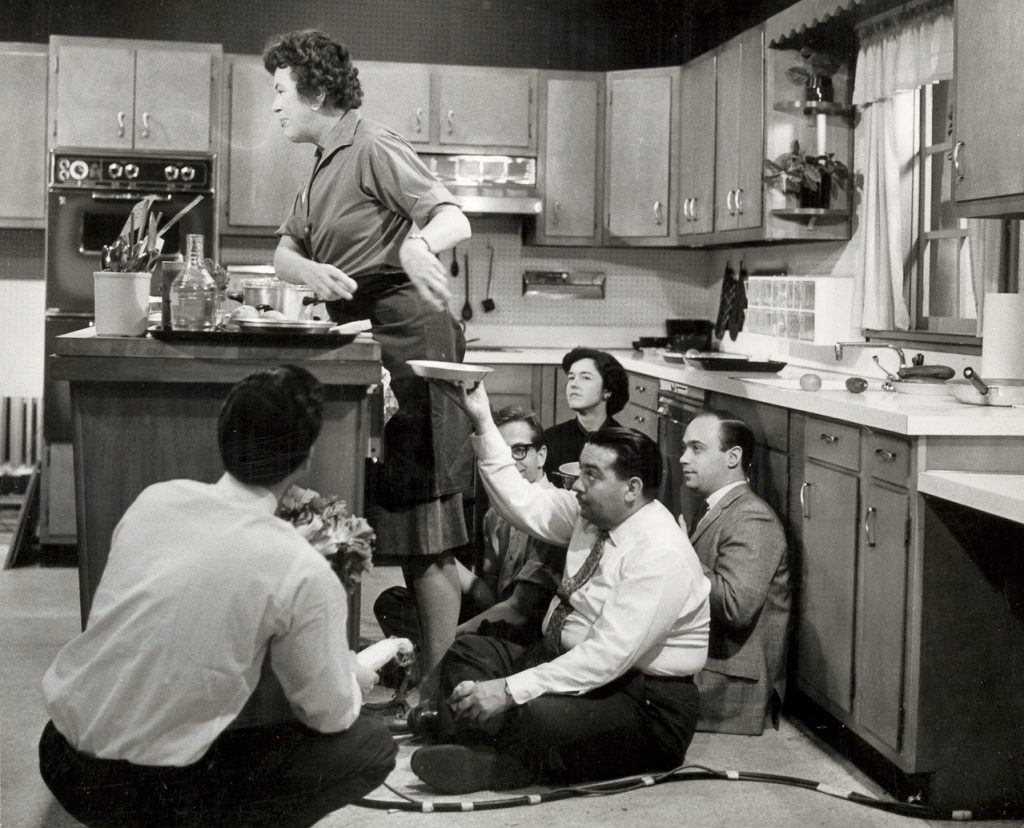 Gordon Ramsay, perhaps the most famous chef on television today, has called Dover Sole the ‘Rolls Royce of fish’ and it is loved the world over, and served in many of its finest cities by many of its greatest chefs.

I personally recall a moment at the famous LRC in Hong Kong, where I enjoyed a remarkable lunch with my good friend Kurt Walter, one of the doyens of hospitality in Asia. The Sole Meunière on that brilliant afternoon was of such extraordinary quality that for the briefest of moments time stopped and all of my attention was drawn to the dish, its specialness and the depth and intensity of just how much my organoleptic senses were enjoying it, a culinary moment never to be forgotten and recalled often with charming fondness. 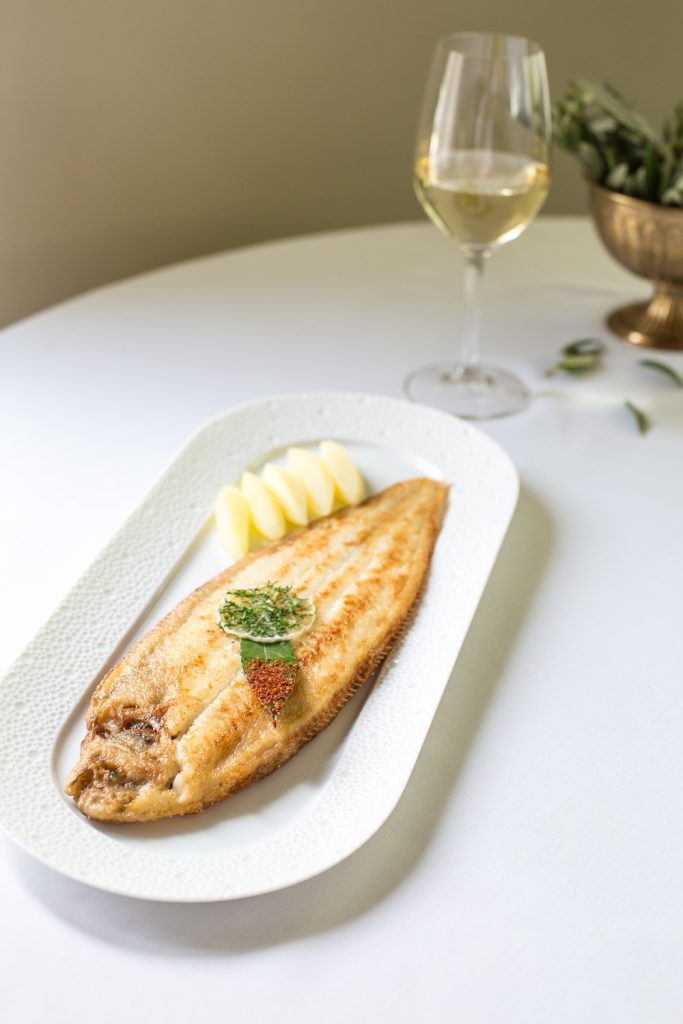 Topaz restaurant in Phnom Penh air-fly Dover Sole from France, and serve the kingdom’s finest Sole Meunière on their dining menu. Putting aside that it is a universally expensive dish, I suggest you drop in for your own ‘Child’ like moment of piscatorial bliss. Pair with a White Burgundy, preferably Montrachet or Meursault. 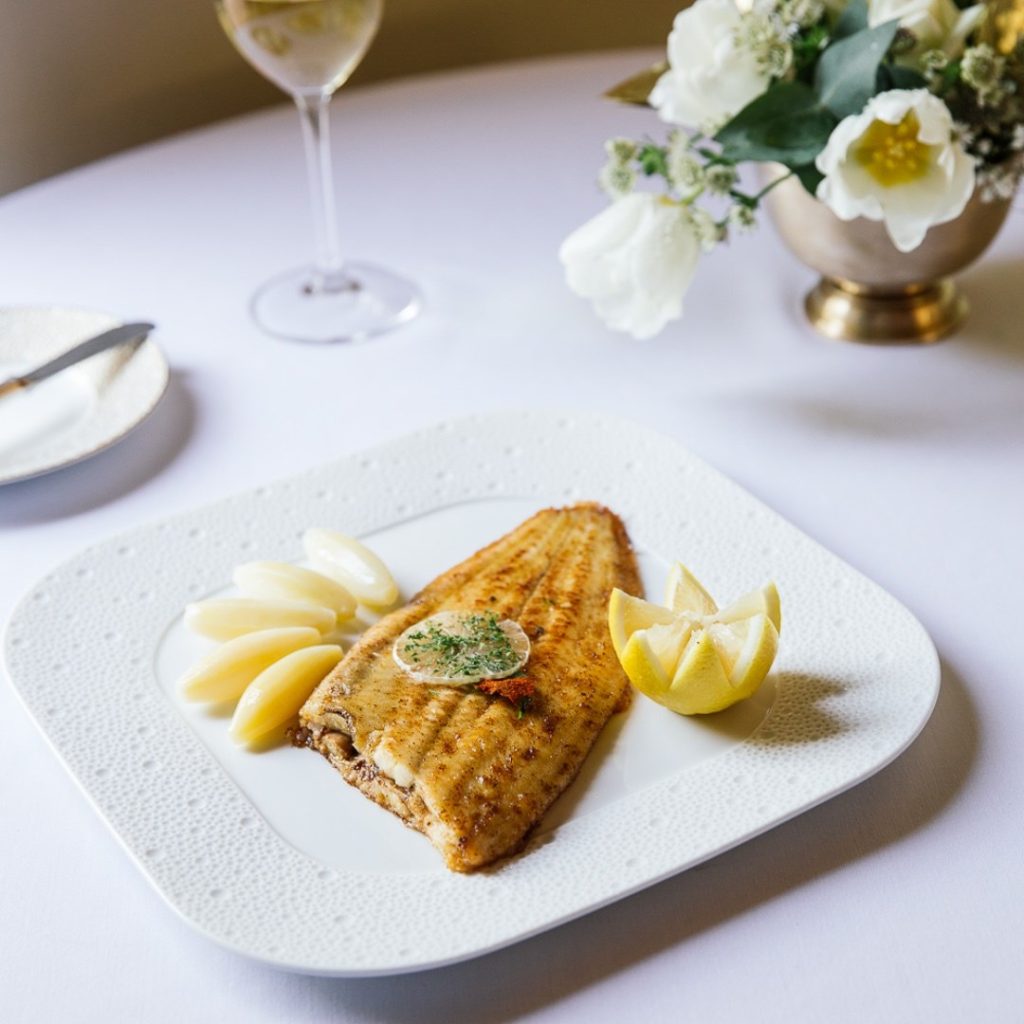