In the year 1543, the same year as its author’s demise, a revolutionary paper was published that would become known as the ‘Copernican Revolution’.

The paper was written by a Polish mathematician, (a mere amateur at that) named Nikolaj Kopernig (Copernicus), who placed the sun at the center of the universe and had all the known planets rotate around it. This phenomenon was something that no one up until that time had seemed to notice; chiefly because it had always been taken for granted that the earth was at the very center of the universe -it was plainly obvious that everything revolved around us.

Meanwhile in Cambodia, King Ang Chan I, the second king of the Longvek period was defending the kingdom against the Siamese. Soon, his son, King Barom Reachea I would gather his Khmer forces for one last push to oust the Thai invaders from Angkor and again establish the ancient capital as the center of the Kingdom, a place it had occupied for the previous six hundred years. He would briefly rule from Angkor for one final decade from 1566 to 1576.

By the end of the century the Longvek era had drawn to a close, it was now the time of the Srei Santhor Kings. In Europe, the Italian Mathematician and friar, Giordano Bruno was preaching that the Universe was infinite, that the Earth was indeed circling the Sun; that the stars were simply more suns which also had planets like our earth orbiting about them and that life was probably not confined to existing on this earth alone.

The Catholic Church would see in the new century by burning Bruno at the stake for heresy. Cambodia would soon enter the era known as the Oudong period, often referred to as Cambodia’s ‘Dark Ages’, an era that would exist for the next two hundred and fifty years. 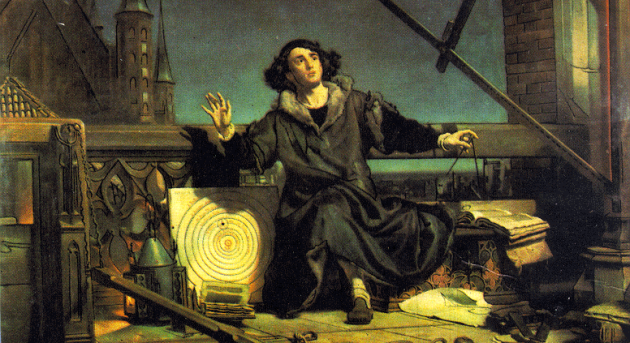 Cambodia would suffer another, more recent dark period, one it would not fully emerge from until the last decade of the last millennium. Once the country did manage to regain its feet, one could be forgiven for thinking that Angkor was again at the centre of Cambodia’s universe.

For a while, all opportunity and development seemed to be centred on tourism at the magnificent remnants of Angkor Wat. Travel to other areas was still risky and the only recently re-populated capital, Phnom Penh had little more to offer than memories still too raw and recent, memories that most were trying to forget.

There are thousands of sites, temples and ruins in and around Angkor; in no time at all there were thousands of hotels, resorts and guest houses and the beauty and wonder of the region was soon under threat from a new invader. This invader took the form of development, investors after quick returns, with little regard for sustainability. For a while it appeared as if Siem Reap was replacing old rubble for new rubble, road dust for concrete dust but, inevitably the gold rush to accommodate tourists began to subside.

Investors were soon looking further afield to develop the tourism sector, to the coastline and islands, the mountains and rivers. Other’s still, sought to make Phnom Penh the hub, the tipping off point and the base from which visitors and travellers could explore the kingdom of wonder.

Cambodia achieved independence from the French in 1953 and under the young King Norodom Sihanouk the capital Phnom Penh underwent a dramatic transformation towards becoming a modern city. Under the guidance of its king and the audacious young architect Van Molyvann, magnificent structures were erected, public buildings, monuments and the city started to take on the shape of an outdoor set from an episode of the thunderbirds: futuristic, slightly surreal and something of a fantasy. Unfortunately, it did all prove too good to be true, revolution, war and genocide followed, unspeakable horror, by 1975 the city was, (forcibly) abandoned.

When I first came to Phnom Penh in the twilight of the 21st century, it was a lost city, you could still see trauma behind the hollow stares and scars on more than just the buildings. Ordinary folk seemed to be scraping out an existence off the rags and bones that were all that was left of a place once regarded as the ‘Paris of the East’.

Here was a city whose soul had abandoned it, a place where you could catch the whispers of ghosts in the air of every little laneway. Expats rode like cowboys through the broken streets on large off-road motorbikes and menacing black Hummers, with tinted black windows travelled the scarred boulevards in ominous convoys.

As the present has been handed over from one generation to another, hope has returned to the city; this is now a place that is home to innocence and eagerness, young people in a hurry to create their own histories, a youth who have moved on from a past not theirs to own.

The city has stopped feeding on itself and began to grow, to develop its personality and to engage with the world on its own terms. Through all the growing pains, the trial and error, the smart choices and the mistakes, it has returned as a citizen of the world. Year zero was 1975 and Phnom Penh has had to make up two millennium in just a little over forty years; today it is a growing, modernizing city full of spirit and ambition, the ghosts have finally gone quiet and after so many decades, dreams have found their voices once again.

Now the city is in the midst of a development boom and facing growing pains and the other associated challenges that go with it: developing infrastructure and safe building code practices and insightful urban planning for example. However, these are all changes that many of the other capitals and major cities of the Tiger markets have had to find solutions to through their own economic revolutions.

Phnom Penh is finally reclaiming its place as the proud capital of the nation, mounting its own Cambodian Revolution to become the centre of its universe, the jewel in the kingdom’s crown, the sun around which all the moons and satellites orbit. The privately owned Sun and Moon Hotel is hoping to create a bit of revolution of its own by opening its first hotel in the kingdom right in the middle of the capital, Phnom Penh.

Marketed as an Urban Hotel, the Sun and Moon looks to embrace and celebrate the sounds, smells, cacophony and general mayhem that is life in any one of South East Asia’s favourite capital cities. Situated on the corner of Streets 136 and 15, the hotel is opposite Feel Good Café and close to the river district -well placed for those looking to discover some of the culture, colour and movement of the city.

The Hotel itself oozes contemporary design and gives off a fashionista style ambience; casual glamour would not be an inappropriate description. I have visited the outdoor Roof Bar a couple of times and already it’s one of the city’s new ‘spaces’ for the young and beautiful to be seen and to play.

Situated up on the 9th floor, the large open space is all modern sculptural architecture and lo-glo lighting in ever changing colours , there is a large horizon-less pool and views of the cityscape that have the requisite amount of ‘take-your-breath-away’ required by such rooftop establishments.

Today, I am here to have lunch with Ms. Meansambo Nov, the charming young Executive Assistant Manager of the hotel, at their newly opened gastro pub named Salt ‘n’ Pepper. The outlet claims to offer the culinary delights of a British Pub, a French Bistro and an Italian Trattoria all in one and I’m here to see if it lives up to the snazzy marketing. As I wait in the lobby I can see that the hotel is busy, people constantly entering or leaving elevators, groups milling about at the front desk.

When I am shown to the restaurant my first thought is it doesn’t look or feel much like a pub, bistro or trattoria and is more in keeping with a chic canteen and the vibrant, modern motif of the hotel. The space is comfortable and seats around 30 people with an adjacent private room that can seat another 20.

The Menu looks like fun fare and in keeping with the stated theme; there are plenty of snacks, salads, soups, pastas, burgers, nine different dishes off the grill and five other mains. There are 10 different desserts including the ice-cream and sorbet.

Notable stand out dishes are a Foie Gras terrine, a Mekong Lobster soup, Wild Boar Ragu Spaghetti, Scallops in Parchment, 48 Hour Slow Cooked Lamb Shoulder and a 1,000 Gram Grilled U.S. Beef OP Rib, (which I would not recommended for one person alone or, anyone with a heart condition).

The OP Rib is $88; most dishes seem to range between $6 and $12 with mains and grilled options mostly between $15 and $20. The menu cleverly offers a dish and a price to suit just about everyone.

I order the timeless classic of almost every French Brasserie, the Beef Bourguignon a peasant dish refined by the father of French haute-cuisine, Auguste Escoffier and Mr. Caesar Cadini’s creation, the Salad that bears his name. Ms. Sambo opts for a trendy incarnation of the retro dinner party favourite, the prawn cocktail.

My Caesar arrives and the lettuce is crisp and fresh, the dressing creamy and authentic, the coddled eggs nicely handled. The Beef Bourguignon is richly flavoured, the beef slow cooked and tender without being dry, the sauce is reduced, rich and well balanced. The prawn cocktail is perfectly presented in a large cocktail glass and is full of fresh, clean flavours and vibrant citrus acidity. The food is on the mark, the wine list could be with a little price adjustment and the staff are friendly and enthusiastic. 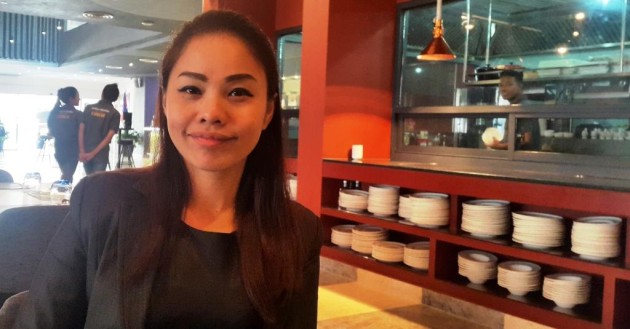 Ms. Sambo tells me she left her home in Phnom Penh at a young age to work in the travel industry in Siem Reap, a concern to her family but, she managed to find a good job with a tour company that sent her to live in Japan for a whole year to study Japanese language, which she now speaks, reads and writes fluently. She tells me that joining Sun and Moon and is the best possible outcome for her career. She says this with enough genuine enthusiasm to have me believe her.

A few nights later and I am back at the roof bar with the beautiful, confident and engaging Sophanika Chan, who also works for the hotel. Other members of staff come over to say hello. I can see they are invested in the company’s philosophy, enjoying new careers in this new hotel and their joy rubs off. Life in the neon glow of the big city can be fun and I will definitely be back.