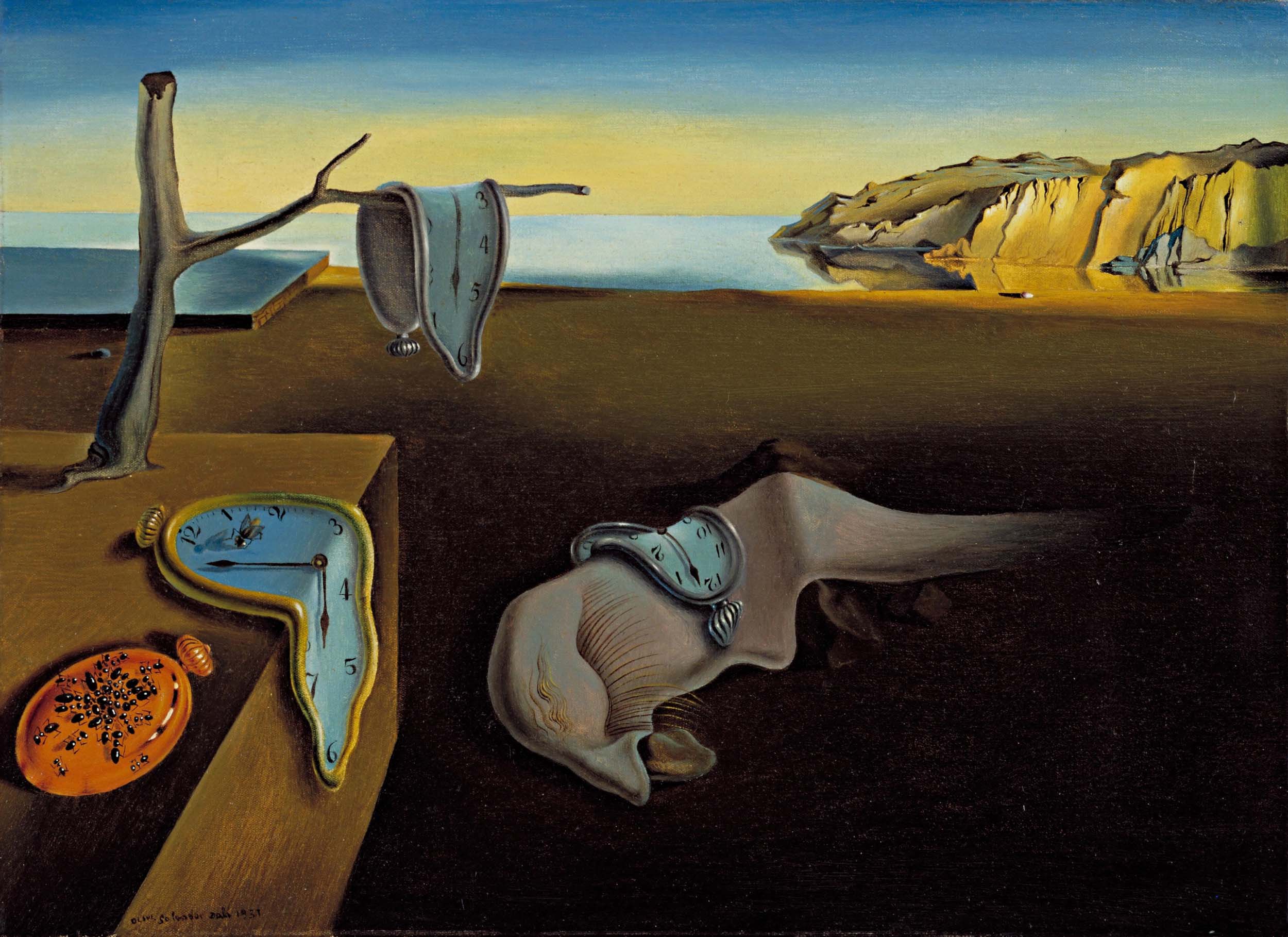 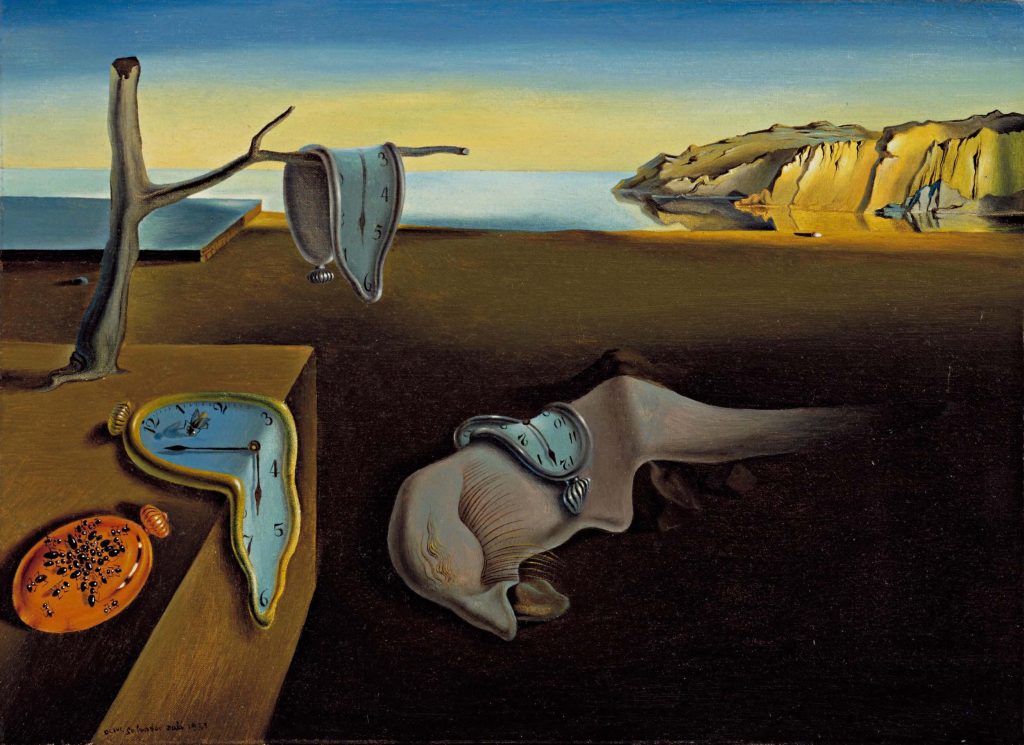 “Muftis and bishops should be like ripe camembert cheeses – a bit on the nose and not for the faint-hearted, but memorable!”

It was over half a century ago, 1966 that the then French President, General Charles de Gaulle made his famous speech at Olympic Stadium in Phnom Penh, in front of an estimated crowd of 100,000 people.

In his address, de Gaulle praised Prince Sihanouk for his ambitious development and modernization policies and for his neutral stance in the expanding war between Vietnam and the United States of America. De Gaulle called on the U.S. to extract itself from the region, believing that only a political agreement would bring about peace and restore regional stability, “One must leave countries to manage their own destiny in their own way” was his famous declaration. 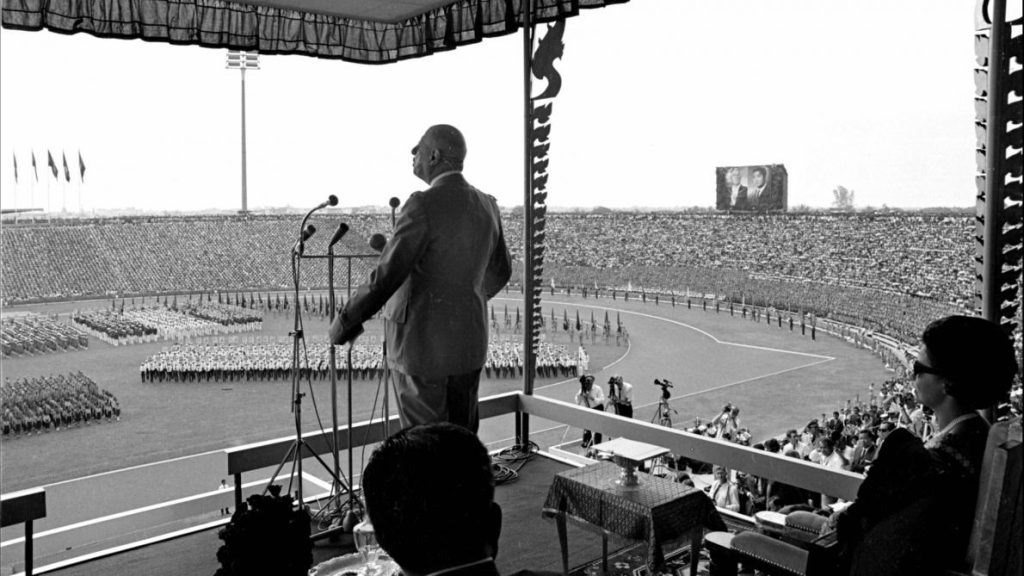 Of course, one of de Gaulle’s more famous quotes was the statement “Comment voulez-vous gouverner un pays qui a deux cent quarante-six variétés de fromage?” –how can you govern a country which has two hundred and forty-six varieties of cheese?

So, it should perhaps be of no surprise that the French Bistrot Khema, (significant importers and purveyors of fine cheeses), immediately saw -in the development of the fresh milk industry in Cambodia- an opportunity to begin making their own cheese.

Working with international dairy consultant Nicolas Rousseau, the first cheese to be released was a creamy fresh blanc that was named ‘Le Rousseau’ in honour of their mentor. Nicolas saw only high expectations for the local industry, “The industry in Cambodia has the right breed of dairy cows in use, the diet supplied is very good and the fat content exceptional, beyond my expectations”.

Khema has been producing and selling to the market, fresh blanc cheese, ash-rolled fresh cheese, and mozzarella. They are also developing new cheeses, such as a Neuchâtel, and a raclette-style cheese. Head Chef at Thalias, Sopheak Pov also spoke of his hopes that they will soon be experimenting with blue-mold cheeses.

However, a very special cheese project, one that has taken over two years to evolve, has finally reached fruition.

“The famous soft watches are nothing else than the tender, extravagant, solitary, paranoic-critical camembert of space and time.”

Salvador Dali (1904-1989) remains the most famous artist of the Surrealist movement, many of the images he depicted in his work have become widely known, some of them iconic, such as his enduring soft clocks.

The clocks first appeared in his 1931 masterpiece: The Persistence of Memory, one of the most recognizable works of all Surrealism. It is widely acclaimed and frequently referred to in popular culture to this day. The work itself is sometimes referred to as “Melting Clocks” or, “Soft Watches”.

It is a deeply personal painting for Dali and depicts a memory from his childhood, the melting clocks representing the relativity of time and space and the breakdown of a fixed cosmic order. Set in the Bay of Roses where Dali spent his childhood, the work depicts Dali himself looking for all intents and purposes like a soft, amoeba-like creature lying helpless on the beach. 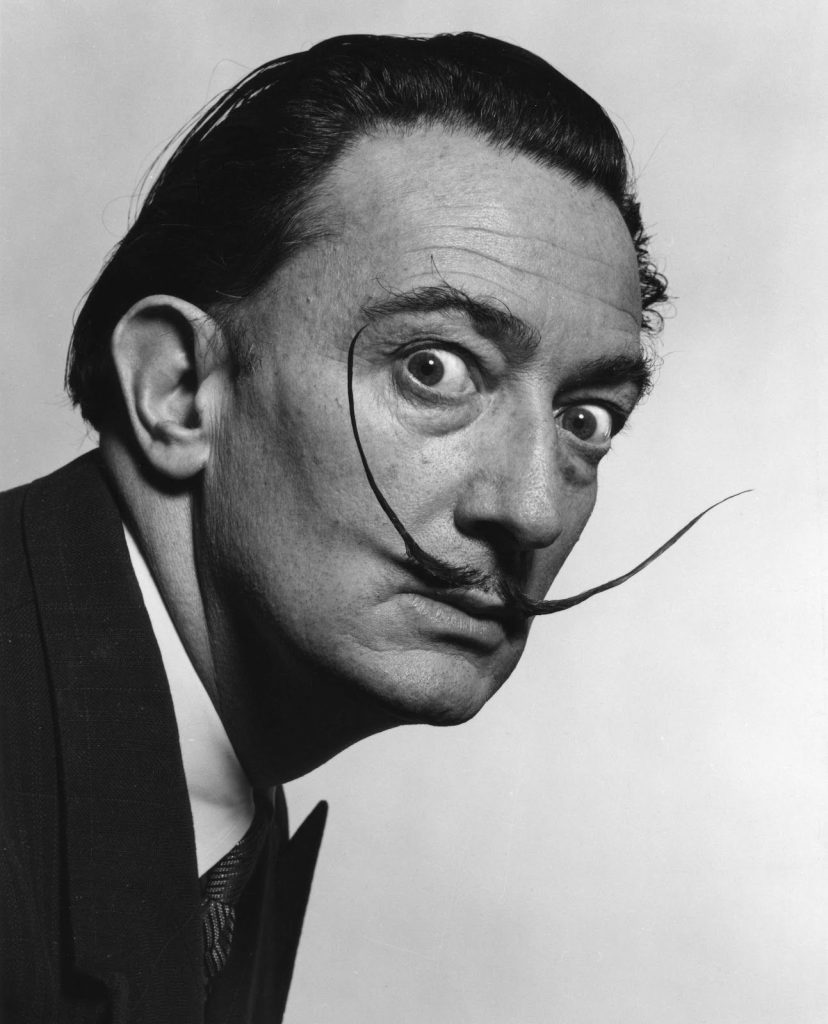 Many suggested that Dali was inspired, or was even making a comment on Alfred Einstein’s theory of relativity however; Dalí famously replied that he was inspired to paint the melting watches while he was eating some particularly runny Camembert cheese. It triggered in him a memory of a visit to the doctor when he was still a child. The doctor said, “Show me your tongue.” Dalí intentionally misread the words montrer (to show) and langue (tongue) as montre (watch) and langeur (languid) and this gave him the idea for the soft and melting pocket-watches, resembling the running of a soft and melting wheel of Camembert cheese. Camembert as art and inspiration!

“The camembert with its venison scent defeats the Marolles and Limbourg dull smells; It spreads its exhalation, smothering the other scents under its surprising breath abundance.”

Whilst records show that the famous raw-milk cheese from the Camembert region of Normandy has been produced there since the end of the 17th century, there is a more romantic legend of its invention by the young cheesemaker Marie Harel, who was taught to make it by a refractory priest, Abbot Charles-Jean Bonvoust, hidden in 1796–97 at the Manor of Beaumoncel where she worked. The Abbott is said to have come from the famous cheese region of Brie.

Marie Harel did make Camembert cheese according to the local custom, and she initiated a dynasty of cheesemakers who produced Camembert cheese on a large scale; most notably her grandson Cyrille Paynel, born in 1817.

The success of the production of Camembert in the first half of the 19th century was largely due to the descendants of Harel, but around the 1870s, other Norman cheese makers began to contest the family monopoly.

The town of Vimoutiers built a statue to Marie in her honour; but on the 14th of June 1944, during the Battle of Normandy, Vimoutiers was mistakenly bombarded by friendly fire. The village was destroyed and tragically, many lives were lost. Four hundred people from the small town of Van Wert, Ohio in the United States, (who called themselves cheesemakers) contributed to the costs of reconstruction and reparation of the town, this included the replacement of Marie Harel’s statue, in 1953. 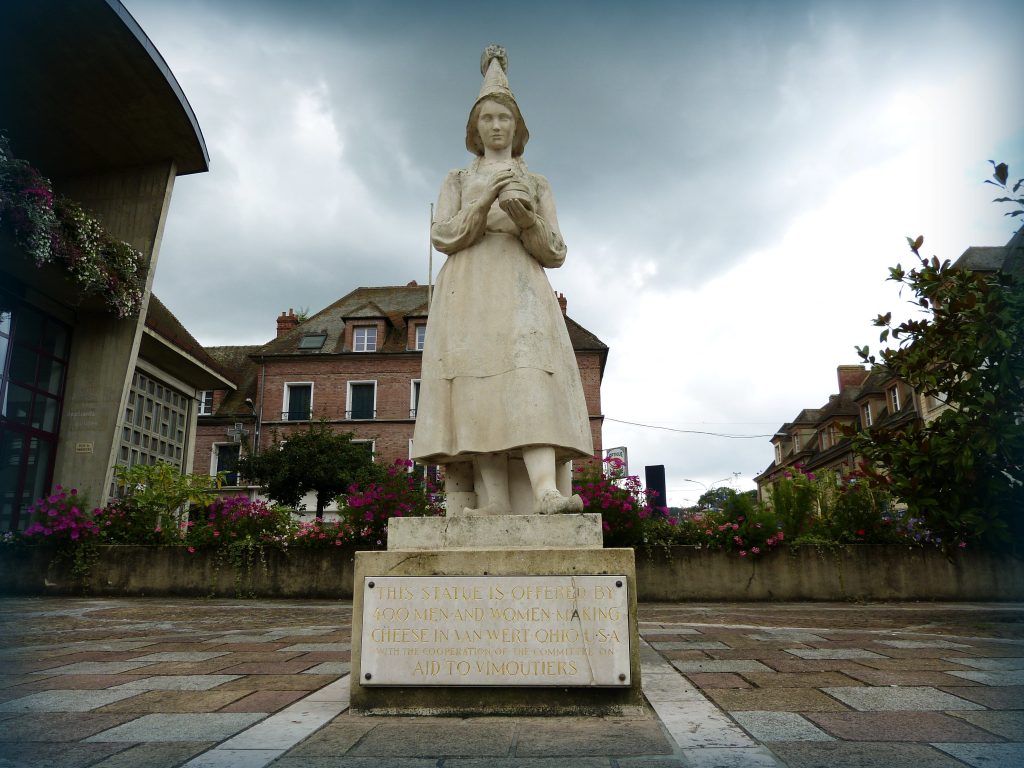 Whilst it has slightly less fat content than Brie, Camembert has a stronger, earthier flavour than its counterpart. Traditional Camembert is made from fresh, raw milk, high in fat, and rich in proteins. The milk is warmed and then poured into large vats, where natural rennet is added. Once the curds have formed, they are ladled out carefully, (to prevent them from breaking) into individual cheese molds. When the cheeses have drained sufficiently, they are then turned over. On the second day, the cheeses are removed from the molds and taken to the salting room. Here dry salt is shaken onto all surfaces of each cheese. On the third day the cheeses are placed in the drying room and it is here that the bloomy mold of penicillium candidum forms the rind. The ripening period is approximately two weeks, after which time the cheeses are ready for packing and, then aged for a further four or five days.

The aroma, flavor, and texture of Camembert have gained the cheese international popularity, making it one of the most well-known and sought-after soft cheeses all over the world. Brimming with aromas of mushrooms, forest floor, cabbage patch, wild garlic, and more, the flavours range from creamy and buttery to notes of nuttiness, fruitiness, grassy, eggy, and truffle-like. The best ones have an almost runny texture, the mold rind that grows around the cheese sends forth microscopic roots (rhizomes), that work their way inside, turning the texture from chalky to richly soft and creamy. 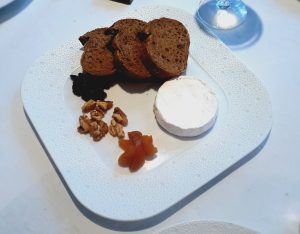 During a recent visit to Topaz restaurant -at the end of my meal- I was greeted by a beaming Executive Chef, Sopheak. He approached my table carrying a small bundle as though it were a precious child just delivered after a terribly difficult labour. He had every right to be brimming with pride, and he wanted to share his magnificent creation with me, a small wheel of Camembert, made in Cambodia. The cheese had a wonderful, full, marvelous bloom, it was fragrant, slightly pungent, nice and complex, and compelling. The texture was creamy, oozing out onto the board and the flavours: buttery, rich, nutty, dreamy. For a moment, like Dali’s soft clocks, time and space stood still, as I savoured this moment of joy on my palate and this moment of triumph for my Cambodia. It had been a long journey from de Gaulle to Camembert; I smiled at chef, carved another, generous slice off his little wheel of splendor, and in celebration, ordered another digestif. 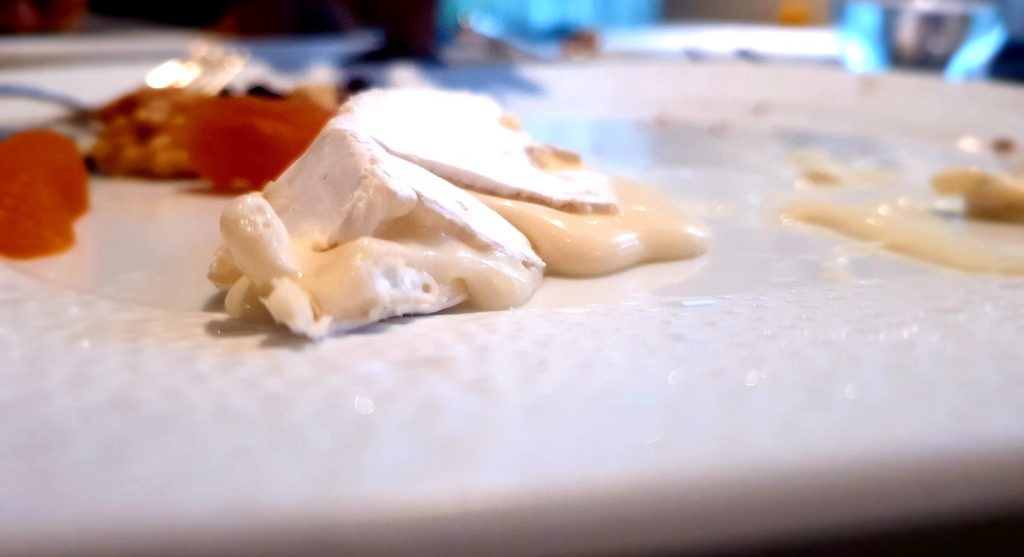 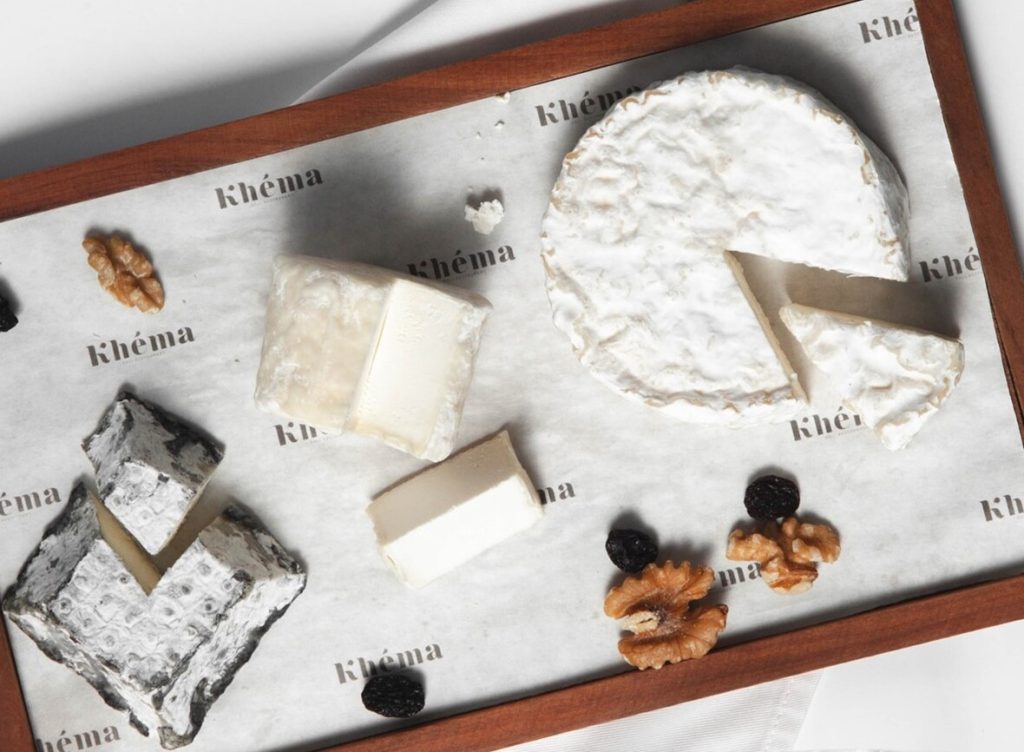