Facebook
Home Culture The Pastry at the End of the Earth 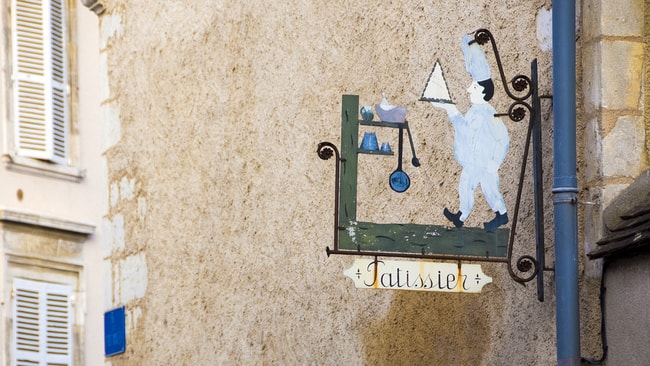 The Pastry at the End of the Earth

“It is for others one must learn to do everything; for there lies the secret of happiness.”

Jules Gabriel Verne, (1828 to 1905) was an extraordinary novelist, poet and playwright, a man of indomitable imagination, his most famous works would become known as the ‘Voyages Extraordinaires’, and include some of the world’s most well-read and cherished works of science-fiction: Journey to the Center of the Earth, Twenty Thousand Leagues Under the Sea and Around the World in Eighty Days. 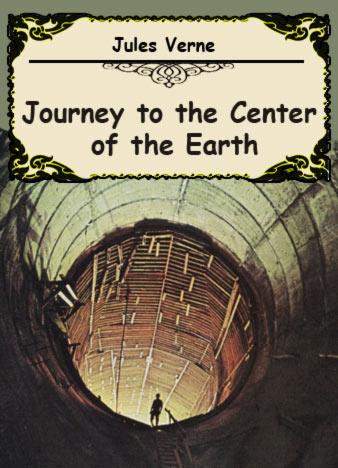 Verne is a historically important author and he had a wide influence on the literary avant-garde and surrealism movements. He is one of the most translated authors in the world and at various times has been the single most translated French author in history. He has been called the ‘Father of Science Fiction’ along with H. G. Wells. France declared 2005, ‘Jules Verne Year’ to acknowledge the centenary of his passing. 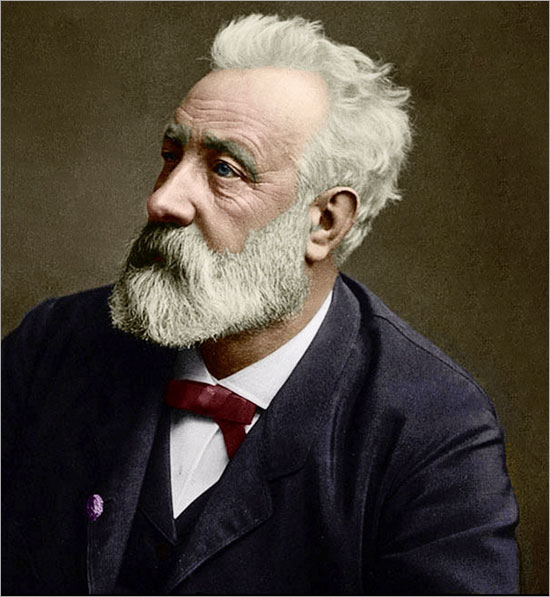 “Anything one man can imagine; other men can make real.”

Jules Verne, Around the World in Eighty Days

Born in Brittany on the Île Feydeau, in the Loire River at Nantes, Jules Verne, author of some of literature’s most fantastic journeys, would have to wait until he was in his early thirties before traveling to the ‘ends of the earth’ in order to discover the richest, sweetest and most buttery pastry the world has ever known. 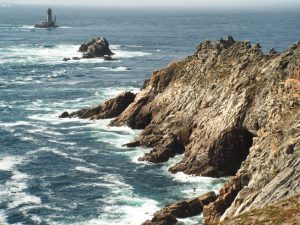 Verne would have traveled west by northwest until he reached the forest of Paimpont, which would have made this perhaps yet another fantastic voyage for the young author. Once known as the enchanted forest of Brocéliande, this is reputed to be the home of Viviene -The Lady in the Lake, of the tragic lovers, Tristan and Isolde, and the final resting place of the great druid Merlin. The forest here is the site of many medieval legends regarding King Arthur, his round table knights, and ‘The Matter of Britain’. Verne would have then headed straight for the coastline and the village of Douarnenez, which is nestled around the shores of a little estuary at the mouth of the Pouldavid River, in the department of Finistere.

Finistere Brittany is the western-most land mass and coastline of France; the name Finistere derives from the Latin ‘Finis Terræ’, meaning the ‘end of the earth’, and it is here that Verne would discover the irresistible, fist-sized pastry known as ‘kouign-amann’, (pronounced: queen a-mahn). Breton is the Celtic language spoken in Brittany and in the local dialect kouign means ‘brioche’ or ‘cake’ and amann translates to ‘butter’. This small, round, multi-layered pastry is made with laminated dough, (originally bread dough, nowadays sometimes viennoiserie dough) it has layers of butter, incorporated with sugar and is baked until the sugar caramelizes and steam from the water in the butter expands the dough, resulting in its layered structure, resembling something like a sweet, caramelized croissant. 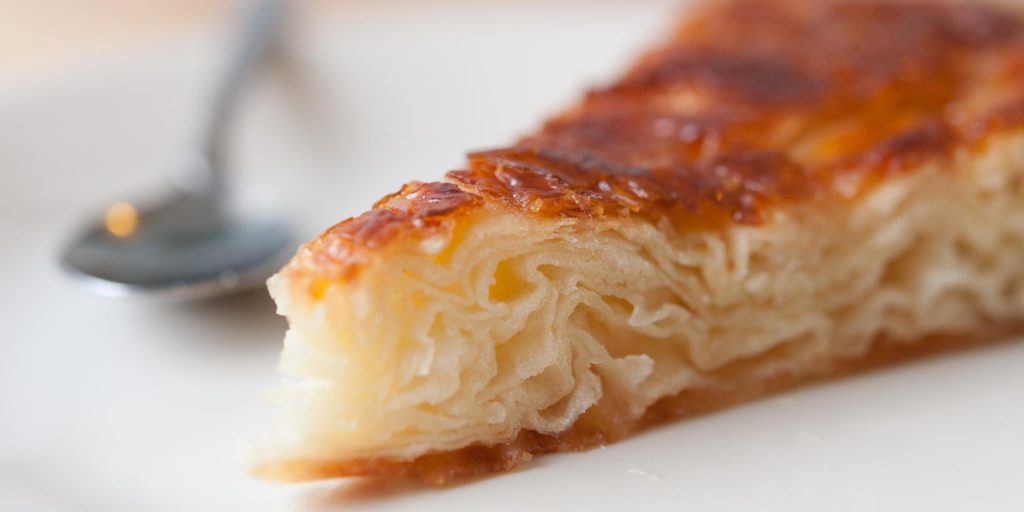 The strict original Douarnenez recipe requires a ratio of 40 percent dough, 30 percent butter, and 30 percent sugar, and has been described by the New York Times as, “the fattiest pastry in all of Europe”.

“Before all masters, necessity is the one most listened to, and who teaches the best.”

Its creation is attributed to Yves-René Scordia, (1828–1878) who began baking it sometime around 1860 at the shop of Monsieur and Madame Crozon in Place Gabriel-Peri, on Rue Voltaire. Legend has it that the baker created his famous pastry on a particularly busy day, when having run out of cakes, he improvised. Scordia took his remaining bread dough and began laminating it with butter and sugar, creating a buttery, caramelized, crusty pastry. Others have suggested Yves Rene made the cake in error when he grabbed the wrong flour, in what turned out to be a divine mistake. Crozon bakery’s customers must have enjoyed the results as they kept coming back for more, soon enough this Breton butter cake would be the most famous pastry in the region and people would be traveling to the ‘end of the earth’ to get some. 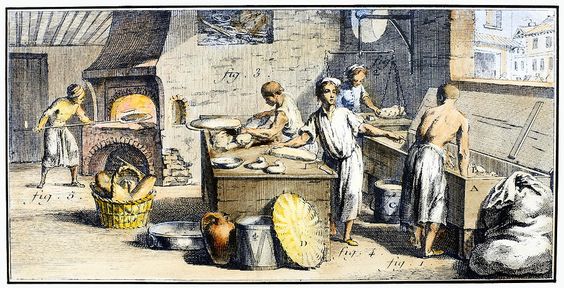 “We now know most things that can be measured in this world, except the bounds of human ambition!”

In November 1999, in an effort to preserve their heritage, seventeen pastry chefs and bakers from Douarnenez came together to form the Kouign-Amann de Douarnenez Association. Their manifesto clearly states their raison d’être: to appreciate and protect the authentic kouign-amann, and to obtain an indication géographique protégée, (IGP) which is an official label that indicates a food product’s geographic origins, just like you’d see on a bottle of wine from Burgundy, or pepper from Kampot for example.

The association goes on to describe its rules and regulations with regards to authenticity: the quality (only use bread dough), freshness (must be eaten within 10 hours of baking), appearance (it should look almost over-cooked, due to its deep caramelization) and finally, presentation (it should be plated right-side-up, never upside down).

The President of the Association concludes in a letter:

the KOUIGN-AMANN of DOUARNENEZ , when it is made according to the rules of the art, is totally different from others and this requires protection.

The trade and the techniques evolve but the evolutions cannot conceal all our gastronomic richness and especially its techniques which were perpetuated from generation to generation of Douarnenist craftsmen.

How frustrating for bakers and pastry chefs to see their product, that is to say, an authentic product from craftsmanship, rub shoulders with pale copies and other industrial products also called KOUIGN-AMANN.

And with these wise words, I will close my explanations which have allowed you to understand the reason for our motivation.

The President of the Association 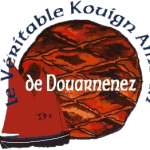 In the latter decades of the 19th Century, Jules Verne, who created magnificent machines to travel around the world in eighty days, to the very center of the earth and some twenty thousand leagues under the sea; would have only needed to travel to the west coast from his home in Nantes -a trip of a mere three hours by modern automobile to reach the end of the earth as the Breton’s call it. And yet, the famous little pastry that he would discover there has been on a ‘voyage extraordinaire’ all of its own, popping up in bakeries, boulangeries and patisseries all over the world, (where such terms are much more loosely applied). In New York City, genius pâtissier Dominique Ansel’s invention of the ‘Cronut’ (a sort of deep-fried croissant) became so famous it should come with its own publicist, performance rider and cocaine habit, yet when he launched his own version of the kouign-amann, (called the DKA as in Domonique’s kouign-amann) it sold out entirely every day for the first six months, with many critics stating it was actually his best pastry.

“I dream with my eyes open.”

― Jules Verne, Journey to the Center of the Earth In Cambodia, Khema bakery is producing their kouign-amann as a part of the pastry selection for their ‘free-flow’ breakfast and brunch offerings. Sticking as closely as possible to the original recipe, the pastry maintains its rustic charm and simple beauty. With a wonderfully crisp crust, sweet, rich texture, a moist center, and a lingering aftertaste of bread dough, caramelization and browned butter, I recommend heading out early morning and venturing to Khema to try one, no doubt it will be worth the journey. 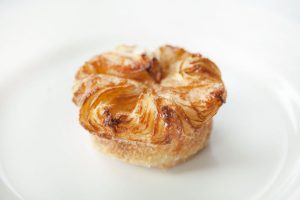