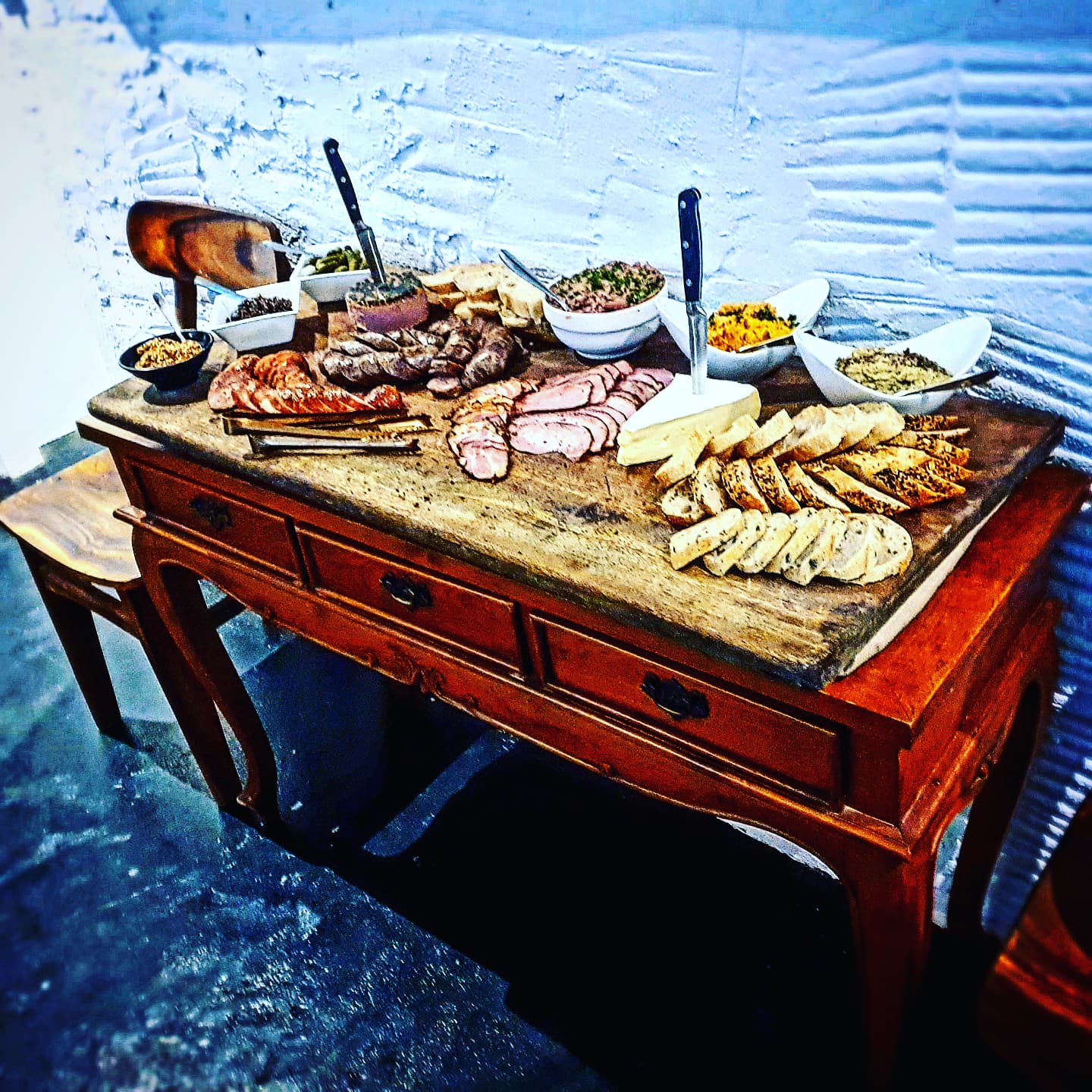 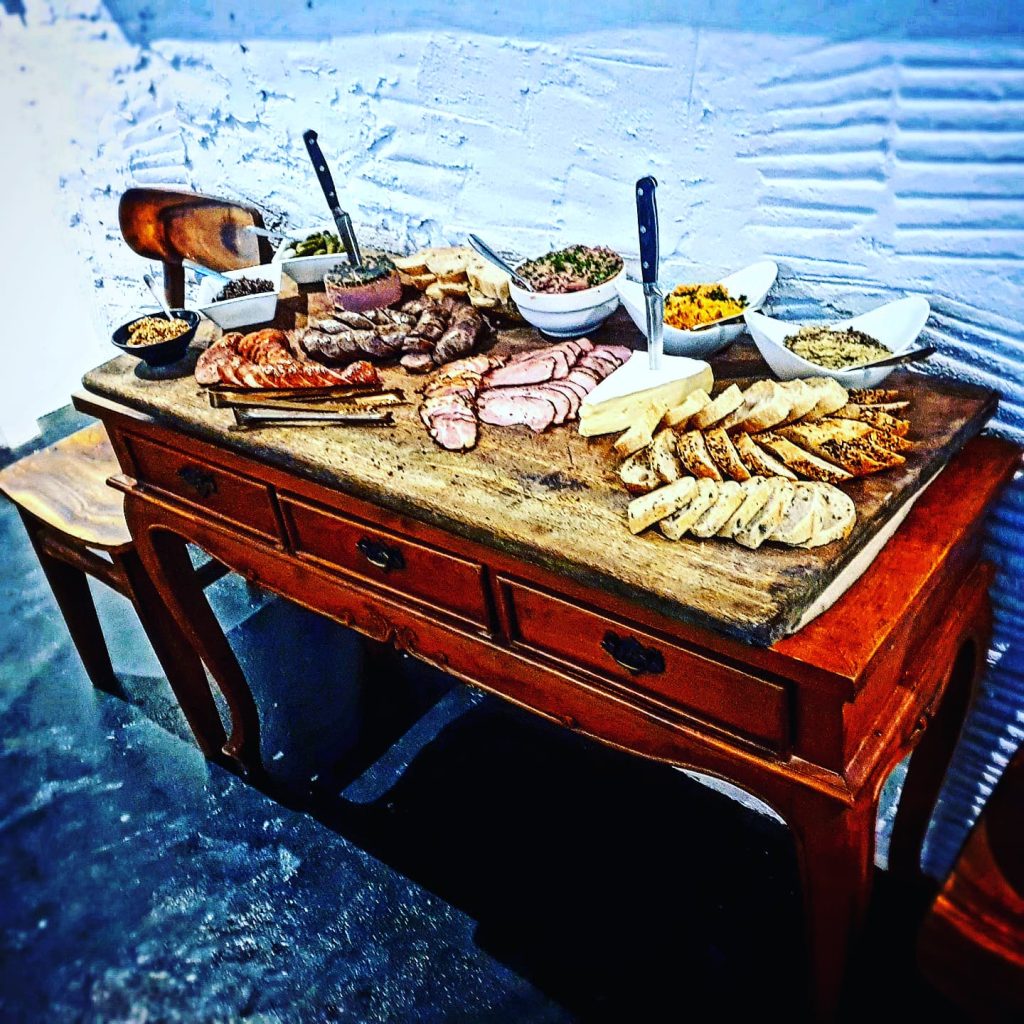 There is nothing quite like an extensive charcuterie board, resplendent with all the trimmings and accompanied by a bottle of good wine, in order to excite one with the promise of a deep satisfaction to come.

Charcuterie boards are -in the words of one of my hipster friends- ‘super-smashable’ right now. I use the term hipsters here not in the sense of the 1950s and 1960s beatniks, or jazz hepcats, but in the sense of those modern ‘nostalgia miners’ who writer Chi Luu of ‘Lingua Obscura’ describes as a “sub-culture who enjoy fossicking around in the past for cultural items, in an effort to attain authenticity and autonomy (always frantically one step ahead of the mainstream) and ultimately, an eponymous ‘hipness’. Concluding that “Arguably, rather than producing something novel, hipster culture re-samples from history and remixes it into something new.” Often, this remix involves stripping things bare and taking them back to their basics, things made small, by hand, simple pleasures, appreciated for their authenticity and a certain sense of intimacy, conveyed by their artisanal nature. Whilst the modern interpretation of the Charcuterie board may not conspire to the ancient laws and rules of the Guild of Charcutiers, it certainly derives its inspiration here.

Cured meats, salted, smoked or fermented, sausages, pate’s, rillettes, terrines, fruits -dried and fresh, pickled vegetables, nuts, perhaps some cheese; all harking back to a time when we had to preserve our foods to last through long winters, without access to seasonal ingredients. The curing of meat dates back to ancient times and was an important survival technique for prehistoric humans. In his monumental tome ‘Bibliotheca Historica’, Diodorus Siculus, (90BC-30BC) writes of Cossaei in the mountains of Persia salting the flesh of carnivorous animals, and the Ancient Greek philosopher and historian, Strabo (63BC-24AD) writes of people at Borsippa in Babylon, Iraq catching bats and salting them to eat. The Romans used a salted fat called salsamentum and the Roman gourmet Apicius speaks of making sausages with salt, garum, oil, and wine. “Apicius, the most gluttonous gorger of all spendthrifts, established the view that the flamingo’s tongue has an especially fine flavor.”

The Gauls sent large quantities of salted pork to Rome, where different cuts were sold including hams and sausages, the meat having been smoked as well as salted. The Belgae of Northern Gaul and the Ceretani of Spain were famed for the fatted, salted lambs and pigs and theirs were the most highly prized meats in Rome.

In Ethiopia, according to Pliny the Elder and in Libya according to Saint Jerome, the Acridophages salted and smoked crickets, which arrived at their settlements during the spring in great swarms. The smoking of meat was traditional in North America, where Plains Indians hung meat at the top of their teepees to smoke them above the fire. 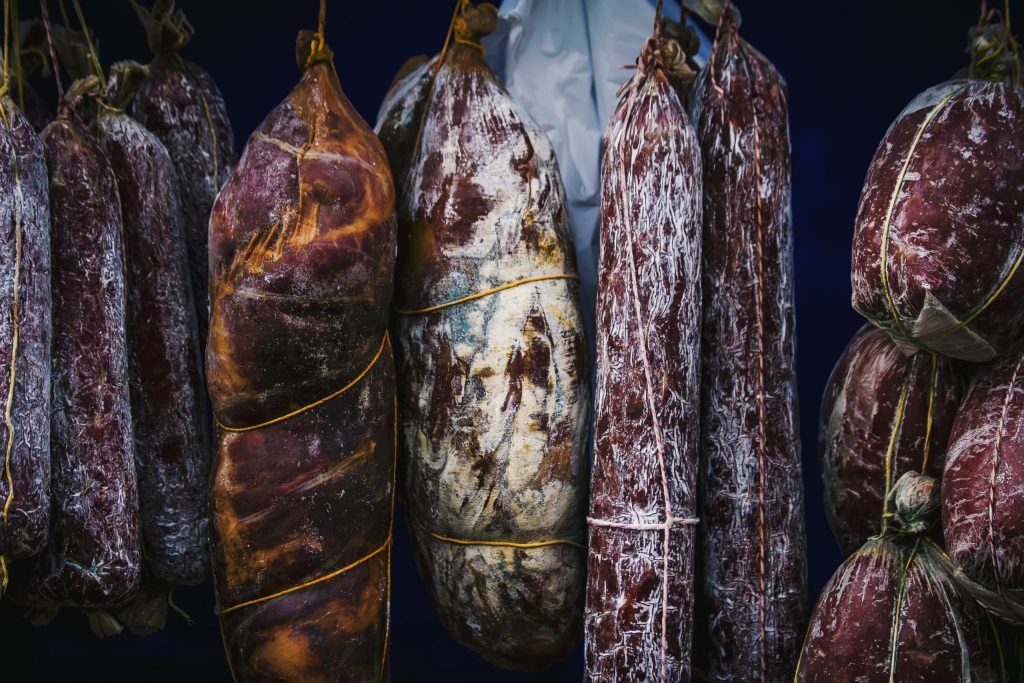 Whilst the emergence of artisan guilds can be traced back to the Akkadian Empire over 2000 years BC, they rose to great prominence in medieval France, where highly skilled culinary craftsmen who gave French food its characteristic identity were regulated by the guild system. The guilds themselves were regulated by the city government, as well as by the French crown. A guild restricted those in a given branch of the culinary industry to operate only within that field. 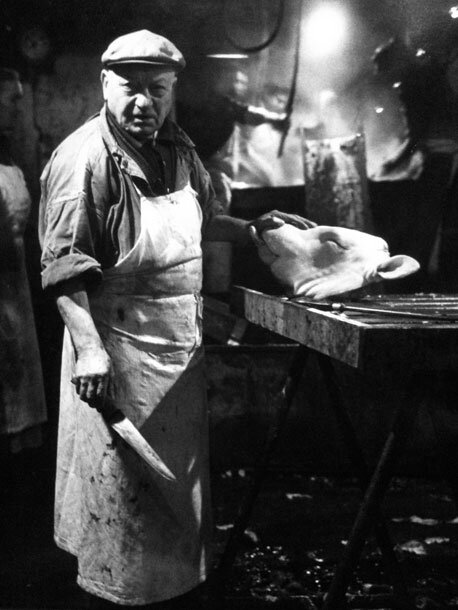 There were two groups of culinary guilds: one consisted of those that supplied the raw material such as butchers, fishmongers, grain merchants, and gardeners. Whilst the second group supplied prepared foods: bakers, pastry cooks, sauce makers, poulterers, and caterers. There was also a small number of guilds that were allowed to offer both raw and prepared foods, the charcutiers and rôtisseurs (purveyors of roasted meat dishes) would supply cooked meat pies and other dishes, as well as raw meat and poultry.

The guilds provided training and set standards for those within their industry. The levels of assistant cook, cook, and master chef were awarded and those who reached the level of master chef were of considerable rank and enjoyed a high level of income, as well as economic and job security.

It was during this time that Pate became a masterpiece of the culinary arts, a doughy envelope filled with all manner of glorious, often hard to obtain meats and grandly sculptured and decorated for important feasts and ceremonies. 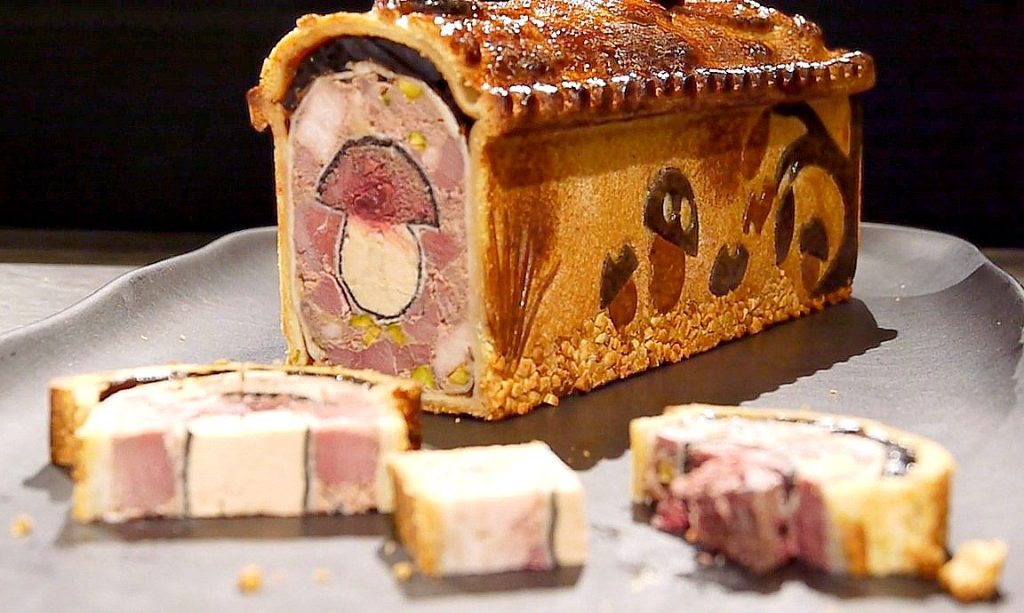 Bartolomeo Sacchi, also known as ‘Platine’, was a prefect of the Vatican Library, he gives the recipe for a pâté of wild beasts: the flesh, after being boiled with salt and vinegar, was larded and placed inside an envelope of spiced fat, with a mélange of pepper, cinnamon and pounded lard; one studded the fat with cloves until it was entirely covered, then placed it inside a pâte.

In the 16th century, the most fashionable pâtés were said to be those of woodcock, au bec doré, capon, beef tongue, cow feet, sheep feet, chicken, veal, and venison. 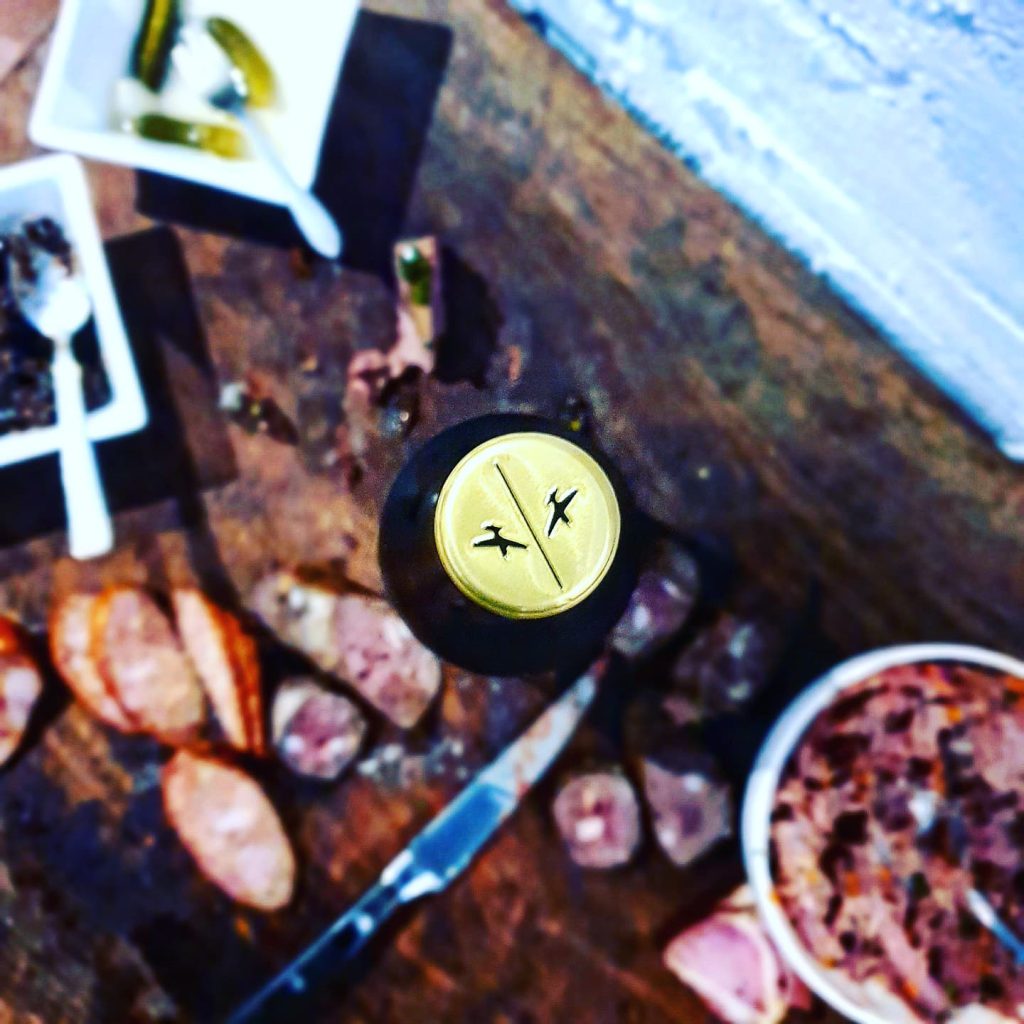 The Age of Exploration

During the Age of exploration, salted meat kept sailors fed on protein over long voyages. The need to properly feed soldiers during long campaigns outside the country drove scientific research, and then, in 1975 a confectioner named Nicolas Appert -after a bit of experimentation- developed a method of protein preservation that in France still bears his name, ‘appertisation’. A preservation process for long-term storage of food, involving its sterilization in an airtight container by heat treatment, followed by hermetic sealing. This led to the creation of canned, salted meat products such as corned beef and allowed for the long-haul shipment and storage of many cured and processed meat products.

The Confrererie of the Chevaliers de Saint Antoine was founded in 1963 and is still in existence to this day. Its stated goal is to preserve the charcutier’s gastronomical heritage through research, study, and shared knowledge, to protect its methods and traditions, and to promote, share and celebrate the fine art of butchery and charcuterie everywhere. Apparently, one of the founders of this order was Pierre Taittinger -creator of the Champagne house- who had a self-professed weakness for “charcuterie and innards”. 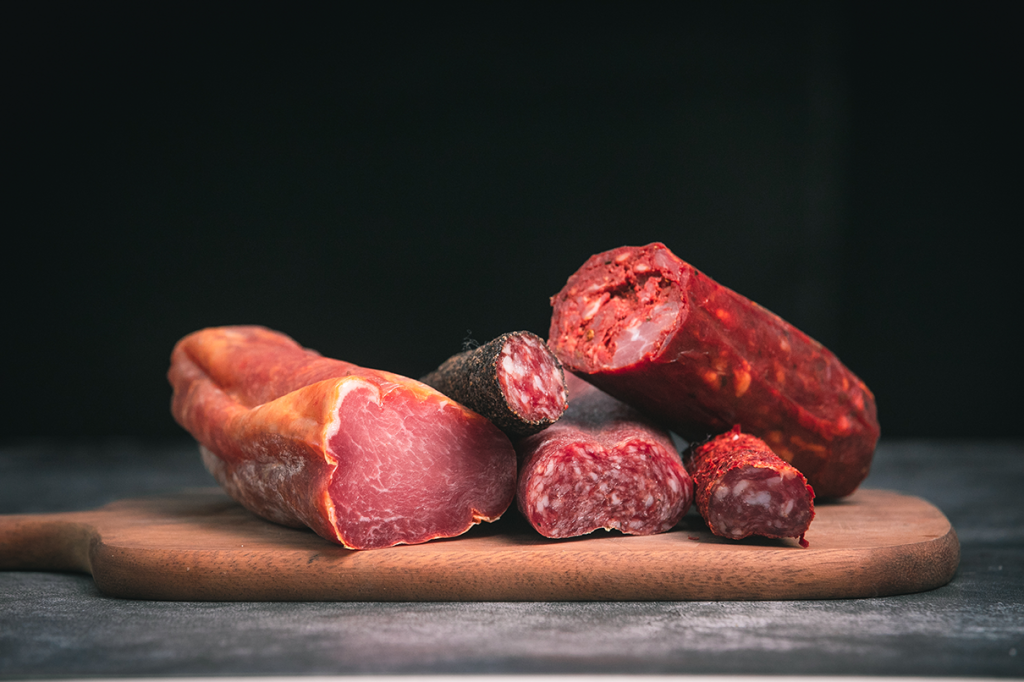 There are surviving traditions of charcuterie across the entire world, from the fermented Sai krok Isan sausage of Thailand to the gurpi, (dried Reindeer) of the Sami in Scandinavia; from the spiced blood sausage in Crèole cooking to the guanciale, salamis and speck of Italy; the chorizos of Spain, wursts of Germany; the merguez and biltong of North and South Africa, to the Pastramis of New York. These traditions are very much alive today and continue to be refined and expanded upon. Charcuterie, once popular for its ability to be stored and transported over long distances, is now adored because these techniques also enhance, illuminate and concentrate flavours, and there is a whole world of options, types, and flavours available. 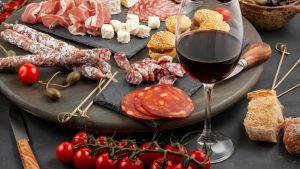 Decorative charcuterie boards are trending right now, with the pandemic restricting movement and shopping becoming increasingly more difficult, (and exasperating), it is easy to see how (affordable) cured meats that may be stored for longer and remain quick and easy to prepare, are in great demand. However, it seems Charcuterie boards are also trending online, and are a favourite with Instagram and other social media platforms, where elaborate, sumptuously attractive pics of boards are clickbait across numerous sites, groups, and pages all over the internet.

During the pandemic, people in lockdown have turned to all manner of crafts and hobbies to keep themselves active and sane; social media is awash with pictures from house-bound bakers of homemade sourdough, pies, and cakes, there are sausage makers and keepers of immaculate, zen-like herb gardens. Whilst It also seems a great many of us took on the role of garde-manger or pantry chef with flair and flourish.

Elaborate, contemporary Charcuterie boards can now cover multiple food groups, with meats, fruits, nuts, vegetables, and even dairy, (dips and cheese). They are extremely delicious, can be relatively inexpensive, and are ridiculously simple to prepare. They are just perfect for shared eating with friends and family and a wonderful accompaniment to a glass or three of fine wine.

Of course, this all makes them sound pretty much irresistible and I find myself planning one even as I type. Enjoy! 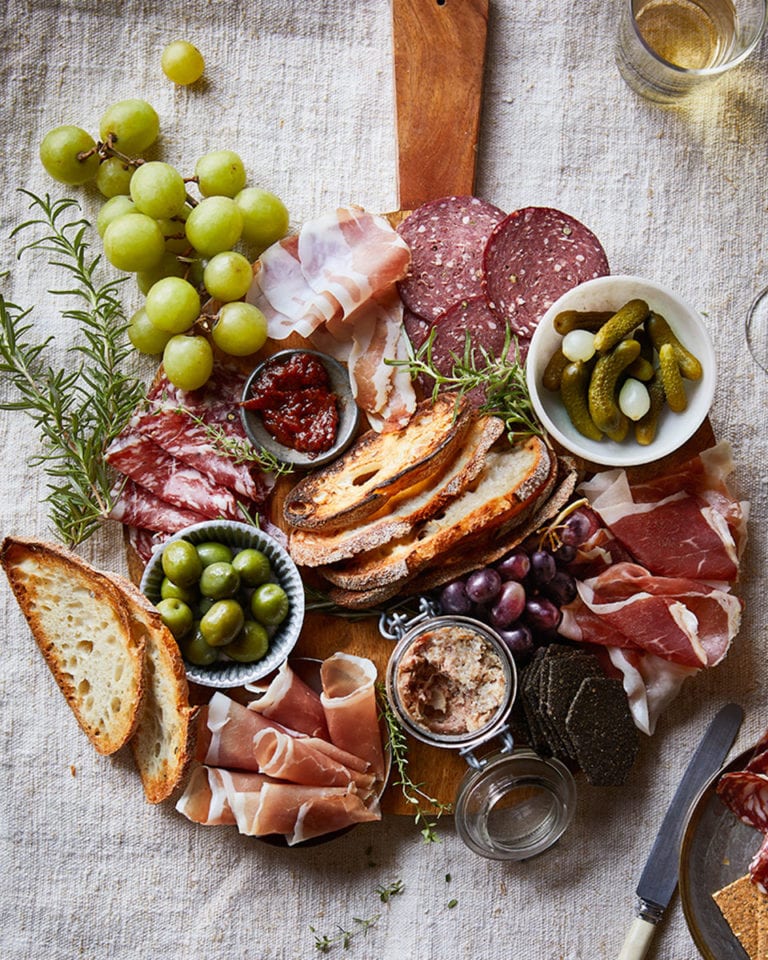