The ‘Misnomer of the Year’ a friend called it, indeed brunch is supposed to be about sleeping in very late on the weekend and then having a relaxed, decadent and somewhat boozy meal between breakfast and lunch that can (and often does) roll on until late in the afternoon.

According to the August 1896 edition of the British magazine Punch, this “excellent portmanteau word” was coined by a Mr. Guy Beringer,  who a year earlier was making his case in ‘Hunter’s Weekly’ magazine for a new style of meal, one specifically curated to suit Saturday night revelers that would be taken immediately after Church on Sundays.

”Brunch is cheerful, sociable and inciting,” Beringer wrote. ”It is talk-compelling. It puts you in a good temper, it makes you satisfied with yourself and your fellow beings, it sweeps away the worries and cobwebs of the week.”

The basic premise was to commence serving breakfast at lunchtime and move on to hardier, heavier dishes throughout the afternoon. Beringer was not specific but demanded ”Everything good, plenty of it, variety and selection.” He also suggested that in order to soothe aching heads beer and whiskey should be served instead of usual coffee and tea! 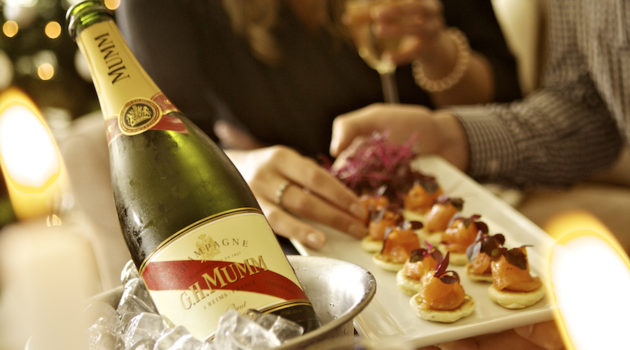 The modern brunch is an odd concept, cocktails for breakfast and a menu that might just have a beef and mushroom pie sitting next to toasted muesli with Greek yoghurt. Your nine-grain, gluten-free artisan bagel will probably be topped off with a slice of salmon cured in ‘Straight Rye’ whiskey and your cold-pressed, freshly squeezed, organic juice will almost certainly come with a healthy shot of prosecco in it!

Rogue dining is a relatively new dining concept, it is where chefs out to make a name for themselves break free of the traditional models and pathways available to them to take over non-conventional spaces. Here they set up a mise-en-place and convert the site into a pop up restaurant, utilizing unusual venues to create a unique ambience and make the dining itself an event. Music or other forms of art and entertainment are sometimes incorporated and diners are usually given limited information and short notice. Often, the site chosen requires that the dining take place at an unusual hour, sometimes midnight or later. 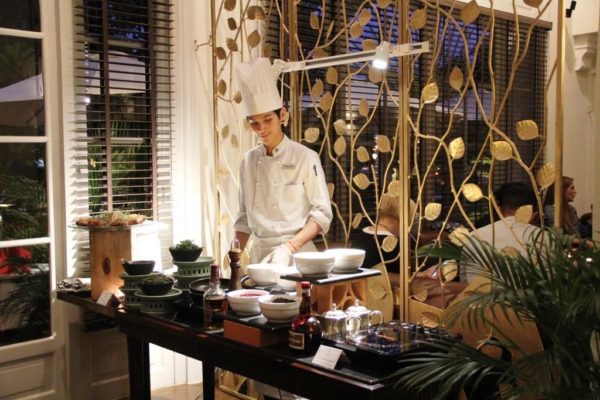 A phenomenon to recently spread from the dining scenes of New York all the way to Phnom Penh, Cambodia is the rogue dining concept of the ‘Midnight Brunch’ , Raffles Le Royal hotel has now very successfully hosted two such events.

Having completed the striking and very successful renovation of the famous Elephant Bar, it is now the turn of the hotel’s iconic Le Royal restaurant to be closed down to undergo a total refurbishment.  This has left Food & Beverage manager Thomas Bianco with a small dilemma, having lost his main dining outlet for a few months he still needs to keep the kitchen occupied, stimulate food and beverage revenue and maintain the hotel’s connection with its guests through its cuisine. 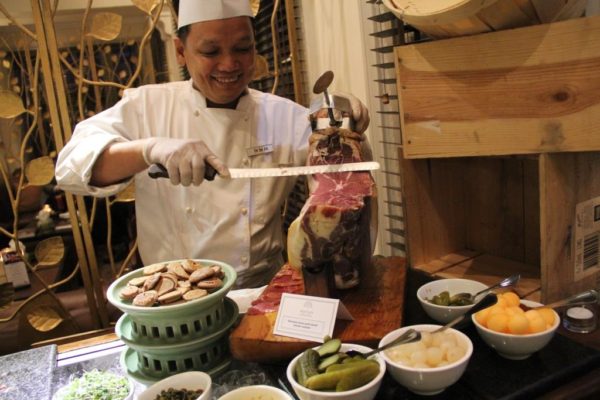 The charming Mr. Bianco possess many outstanding qualities that see him perfectly suited to his job but, perhaps his most valuable assets are both his own creativity and imagination and the willingness of his superiors to let him have his head.

Thomas had identified that whilst there were a lot of great clubs and bars in the city, there was not a lot of focus on the pre-club segment. After doing a bit of research he discovered the New York Brunch Club and felt that this rogue dining concept –with several ‘live Kitchen theatres’ set throughout the Elephant Bar- was just the kind of culinary fun and fancy the club set here would enjoy.

Along with a few friends I attended the second Midnight Brunch held on Saturday evening the 6th of August, Thomas informed us that the first one was so successful and that he had received so many inquiries that a second was inevitable. Given that it was again a full house again on Saturday night it now looks firmly set to become a regular monthly event. 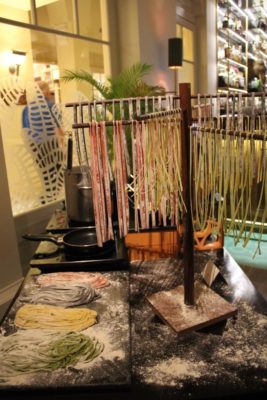 For $55++ guests are offered unlimited food from 9pm until midnight accompanied by a selection of custom designed Elephant Bar cocktails and free-flow Mumm Champagne, truly extraordinary value from a five star hotel.

On Arrival, I was given glass of purple, ‘infused’ gin on ice and a beaker of tonic and lemon juice to add to the drink, upon adding the liquid the drink turned from a stark, ultra-violet to a soft ruby coloured beverage right before my very eyes.  The infusion is a local flower known as ‘butterfly blue pea’ and the colour pigment changes when it comes into contact with citric acid in lemon juice, it’s a need party trick and a fun way to start proceedings.

Soon the bar is full, the cheer and laughter flowing along with the Champagne and the evening is dripping with promise and abandon. The duck station is serving whisky cured duck, The salmon station has various cured salmons including one marinated in beetroot, the fresh pasta station has different pastas infused with squid ink, pesto, saffron and semi sundried tomato all of them hanging out on display like someone’s washing. There is a kitchen station offering Serrano ham and winter cured salami and there is a chef busy flambéing at the crepe station.

The cocktails include the hotel’s world famous ‘femme fatale’, said to be the preferred drink of arguably its most famous guest, Jacqueline Kennedy and then there is the Royal’s twist on the classics.

As midnight rolls around I realize that I may now be more ready to turn into a pumpkin than to hit a club but, I have already had a wonderful evening and I will be ready to do it all again next month.

Thomas Bianco fixes me with his customary smile; the one that I have come to learn by now is part amusement and part mischievous grin. I get the sense there is more roguish dining to be had and I can see that Thomas is enjoying seeing his guests having so much fun. When the grand dining restaurant finally re-opens under Mr. Bianco’s watch, it will no longer be solely about reminiscing and nostalgia, it will also be about making its own history and creating its own legends and I can hardly wait.