In Kyoto, Japan they have ‘Philosopher’s Walk’ a path lined with cherry trees along the canal that runs between the Buddhist temples of Ginkaku-ji and Nanzen-ji. The walk was used by the influential Japanese philosopher Kitaro Nishida, (1870 – 1945) from the Kyoto school of philosophy, as a meditation path and so given its name. Nishida’s most famous work is the masterpiece ‘An Inquiry into the Good’, also known as ‘A Study of Good’.

In Cambodia’s Phnom Penh there is a little lane known both as Abdul Carime Lane, or Street 21. It is a broken lane with the end at Street 308 full of micro bars and party people. The other end of the lane, all the way up near Mao Tse Toung Boulevard is more infamous sadly, it was the site of a gruesome murder several years ago.

In the mid-section of the lane there is the Svay Pope pagoda, the Grounds of the Pagoda are home to the Preah Sihamoni Raja Buddhist University, which schools young monks in the Thommoyouttek Nikeay order of Theravada Buddhism. 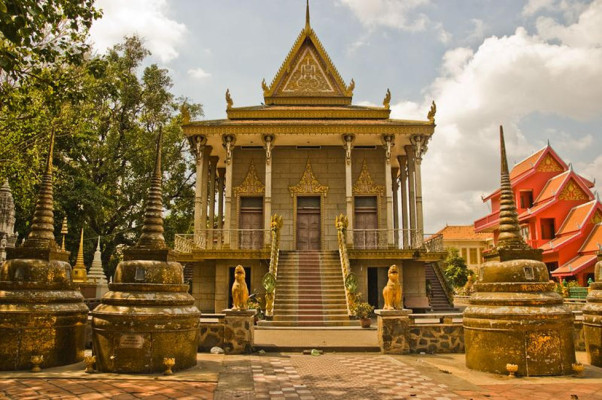 There is a quiet section of lane behind the pagoda lined with old Poinciana trees and this offers relative peace and quiet from the snarling traffic and bustling city life on the boulevards of Preah Norodom and Samdech Sothearos. Here is a calm place for contemplation and reflection and under the shade of these beautiful old trees a young family has set up small outdoor restaurant along the sides of the lane, selling the much loved Khmer snack, Num Krok, Cambodian Rice Cakes in the afternoon. 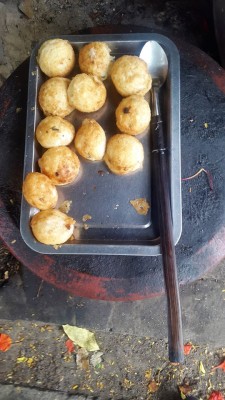 Num means cake in Khmer and Krok is the word for ugly, hardly a fitting title for these gorgeous little balls of tasty delight but. The cake is said to have been given this name because it is prepared in two separate halves and then joined together to hide the ugly faces of each half. Essentially a mixture of rice flour, coconut milk, chopped shallots and a little salt, fish sauce and/or palm sugar; Num Krok can be either savoury or sweet. Num Krok must be cooked in a strong cast iron pan known as a ‘Krok pan’ which has scoops in it for pouring in the mixture and frying up the cake over hot coals.  Cook Srey Nit sits over these coals all afternoon preparing the Num Krok whilst her little sister looks after the family drinks cart. 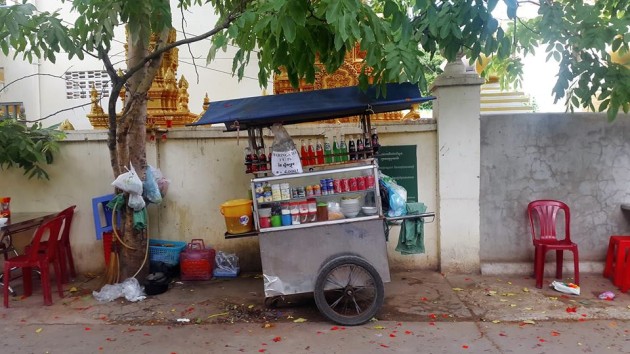 Along each side of the lane are fold up tin tables and plastic chairs but perhaps the most curious aspect of this little al fresco restaurant is the signs posted along the walls at regular intervals.

On each sign, in both Cambodian and English, (and one in French) are abstract poems or philosophical bon mots for dinners to contemplate whilst they eat their snack. There seems no connecting theme to the signs other than they are gently thought provoking and philosophical. A couple of the signs are poems by reasonably well known western poets others are written anonymously, each one varies in its theme.

The Way It Is

There’s a thread you follow. It goes among
things that change. But it doesn’t change.
People wonder about what you are pursuing.
You have to explain about the thread.
But it is hard for others to see.
While you hold it you can’t get lost.
Tragedies happen; people get hurt
or die; and you suffer and get old.
Nothing you do can stop time’s unfolding.
You don’t ever let go of the thread.

The signs were a joint project by the Community and Seamentrey School, an NGO providing free education to underprivileged children and run by returned Khmer refugee Ms. Muoy You. Whilst living in exile Ms. You became a respected teacher working in Africa, the Middle East and at a Montessori school in London, England, which would have a profound influence on her teaching. 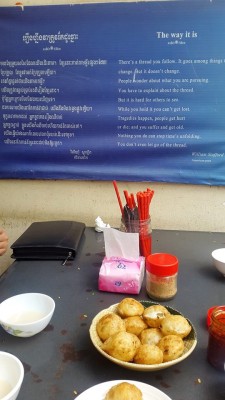 Ms. You returned to Cambodia with a dream to provide education to those who could not afford it, knowing from first-hand experience that education was the way to break the cycle of poverty for Khmer families. Mouy You was supported in her efforts by her husband the internationally renowned Cambodian artist and architect You Khin, who sadly passed away aged 62 in 2009. You Khin’s art often depicts the struggle he saw in the world and inequality, especially for women. His work is often stark and confronting. 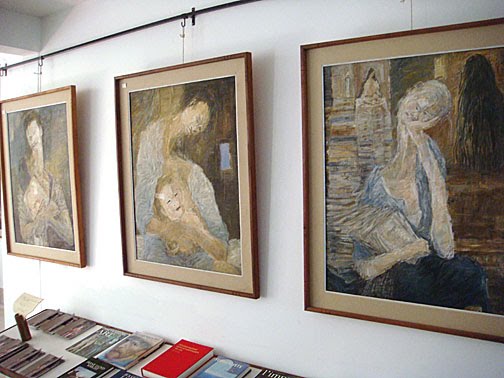 You Khin’s uncle painted Buddhist murals on temple walls throughout his home province of Kampong Cham and this gave the young Khin his inspiration to one day become an artist.

In 1855, King Norodom of Cambodia had a new temple named Wat Botum erected near the Royal Palace and invited the revered Khmer Bhikkhu, Maha Pan to establish a branch of the Thommoyouttek Nikeay order in Cambodia. Around one hundred years later and You Khin would live at the Svay Pope temple in front of the little Num Krok restaurant, which is now the educational epicentre for the Thommoyouttek Nikeay order in the country.

Ever since I started to comprehend the world

If I were a flower I would grow here,

To fill the air with my smell

If I were a bee I would come here

To look for nectar to make honey

To entertain people with my singing

Why do I love this land so much?

I will tell you, because it is my home

The Seamentrey School that Mouy You and You Khin built was in another small lane that runs alongside the northern side of Svay Pope Pagoda from Sothearos Boulevard to Abdul Carime lane near the small street restaurant. Unfortunately, when its lease was up the school needed to move and is now being transformed into an education village about 30 kilometers south of Phnom Penh in Tonle Bati. The new school does seem to be thriving in its new home and educates over 180 children, most free of charge, others paying what they can afford.

The lane that housed the school now boasts a small rum distillery and a café for dogs, which is named ‘Edgar Allen Paw’.  On the other side of the Pagoda, along the Southern boundary is a lane known as ‘barber’s lane’ where a row of men’s hair cutters set out their stalls one after the other, chairs, equipment and little mirrors, offering outdoor haircuts, a shave and a bit of gossip thrown in. 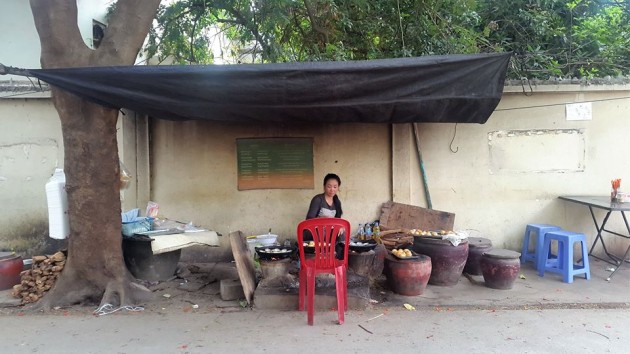 Srey Nit tells me she has been cooking in the lane for about three years and learned to cook Num Krok from her mother, she sells each cake for 400 Khmer Riel until the mixture runs out.

I am always comforted by the notion that amongst all the new high rise buildings, the traffic jams and the International fast food chains and cafes, I can always sneak away to this quiet, shaded area in the little lane behind the pagoda for a delicious snack, a cool drink and a moment to pause and enjoy a Phnom Penh that was once familiar and now seems to be fading away all too quickly. 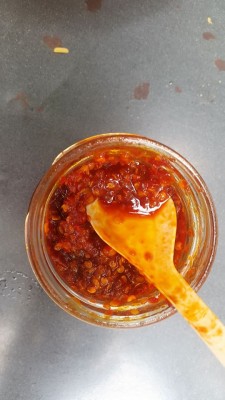