Sevensea, (sic) is the latest culinary concept of Cambodia’s most accomplished and celebrated chef Luu Meng, the stated aim is to combine popular Asian cooking styles with the finest seafood available.

Specializing in Cambodian, Chinese and Japanese seafood the restaurant recently opened at the brand new Almond Bassac Hotel, which sits in a quiet street on the south-west back corner of the Sofitel Hotel property, on the banks of the Bassac River, just before you cross the Rainbow Bridge to Koh Pich, (Diamond Island).

I must confess here to being friends with Luu Meng and we have a shared interest in developing the hospitality industry in Cambodia. He explains that the curious spelling of the name has something to do with getting the business registered in time. However, it does indeed refer to the traditional legend of ‘The Seven Seas’ as sailed by Odysseus, Jason and his Argonauts and Sinbad:

The ‘bahr al-sin’, the “Sea of China” was not a single entity.

‘Whoever wants to go to China must cross seven seas, each one with its own colour and wind and fish and breeze, completely unlike the sea that lies beside it.

The first of them is the Sea of Fars, which men sail setting out from Siraf. It ends at Ra’s al-Jumha; it is a strait where pearls are fished.

The second sea begins at Ra’s al-Jumha and is called Larwi. It is a big sea, and in it is the island of Waqwaq and others that belong to the Zanj. These islands have kings. One can only sail this sea by the stars. It contains huge fish, and in it are many wonders and things that pass description.

The third sea is called Harkand, and in it lies the island of Sarandib, in which are precious stones and rubies. Here are islands with kings, but there is one king over them. In the islands of this sea grow bamboo and rattan.

The fourth sea is called Kalah-bar and is shallow and filled with huge serpents. Sometimes they ride the wind and smash ships. Here are islands where the camphor tree grows.

The fifth sea is called Salahit and is very large and filled with wonders.

The sixth sea is called Kardanj; it is very rainy.

–‘The Seas of Sinbad’, Historian and Arabist Paul Lund

The restaurant features a spacious dining area with attractive arched windows that curve around the corner and open out the view, there is a large central kitchen with fresh tanks and a sashimi station and there is a large timber bar and reception area with a back wall of steel wine racks.

The dining area features some attractive art installations in the form of a giant steel conch sculpture and a large suspended Chinese style abacus. Upstairs there are seven private dining rooms -each featuring their own art installations and themes from old clocks to Chinese artifacts- that range in size from dining for eight to forty people. The rooms look very inviting and I immediately start imagining the possibilities of private feasts to come.

The dining menu is large and attractive, as expected there is a long list of seafood dishes with prices to suit everyone from lowly newspaper columnists to heads of state. Most dishes seem to fall between the six to twelve dollar mark, with some exotic species around thirty dollars. The more highly prized delicacies are listed as being at ‘market prices’ where one must politely inquire as to the current price; I get the impression that the ones who bother to ask are the ones who do not need to care what those prices might be.

For us mere mortals there are plenty of affordable dishes to select from. The wine list too is well thought out and offers a wide selection of reasonably priced options along with some helpful tips to help make an enjoyable pairing with the food.

I decide to try three standards, one from each style of cuisine: the Japanese offering was a Maguro and Mekajiki Shoyu Zuke, which is a Tuna and Swordfish sashimi marinated in soy, mirin and chillies. Spectacularly presented in a large bamboo cradle the dish is superb, the quality of the fish is excellent and very fresh, the flavours a perfect balance between umami savouriness, chili spice and the rich amino fattiness of the fish, it is all about balance and harmony and it is delicious.

The next dish is a Khmer classic, Kampot pepper crab; presented in a tagine like hooded chafing dish set on a copper stand over a sterno flame. As soon as its lid is lifted my universe is filled with the delicious, sweet spice aromas of the Kampot green peppercorns. The crab flesh is also sweet and juicy; this is a superb example of one of Cambodia’s greatest dishes, pure joy. 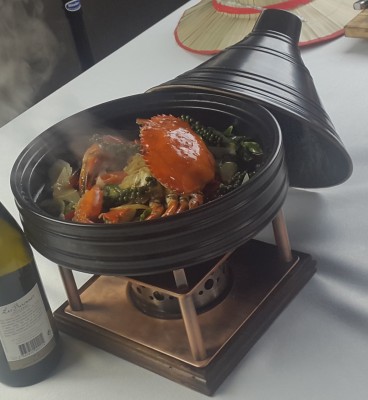 For the Chinese dish I select a braised abalone with wild black rice, slow cooked for 48 hours and coated in a subtle sauce that is made with dried scallop, black chicken stock, Kampot Sea Salt and Kampot Peppers, it is a stunning dish made by a true master, a revelation in elegant complexity, refinement and balance. Cantonese cuisine is all about texture and subtlety and this is a marvelous example of what the cuisine has to offer. 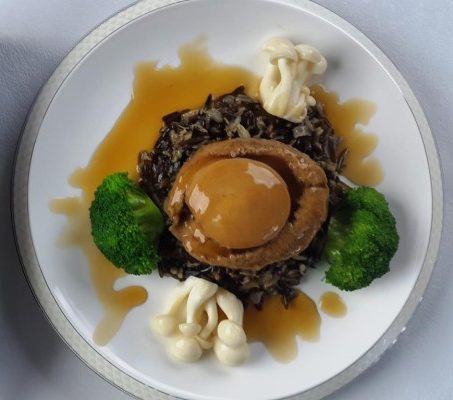 I find myself once again in awe of my good friend’s culinary imagination and skill and doubt anyone would object to this opinion, best get there yourself and give it a try, it is a great opportunity to try classic Asian seafood dishes all in one dinner, I can’t wait to get back there myself.

Open for breakfast, lunch and dinner 7 days per week