When the three of us arrived to pick up Mark 1, we were excited and eager to be on our way to the adventure ahead, only to find him resplendent in dressing gown, bare feet and hair that screamed that he’d only just woke up!

Deadly Derek gunned the slightly battered old Mercedes approximately two hours later than initially intended, we were finally four lads on the road, belting out of Phnom Penh and on our way to parts unknown.

The vague instruction was to turn left at marker 126 on Highway 3, somewhere outside Kampot and then follow the dirt track off into the bush, we’d get there eventually.

As we negotiated the inevitable traffic fleeing the confines of the city we were content with old music, wound down windows and a rush of excitement. Four of us circling fifty, out for adventure, at this age who knew how many more we had left in us. The band had been put together for one final tour, we felt young again, remembered the wild days and enjoyed the moment. Two of my companions shared the name Mark, one of our hosts was named Mark, it was a Mark convention, communication was bound to get difficult, we couldn’t care less.

The back windows didn’t work so the front windows stayed down throughout the journey, creating a sort of wind tunnel in the car, the music was hard rock and electric blues but, it couldn’t be turned up too loud with some sensitive, old ears -frazzled these days by guitar shredding solos. The two Marks sat in the back seat, both with unstable innards and bruised kidneys, no one took up the offer of a beer; a cup of tea might have been nice. We were four good old boys with bad hips, creaking joints, chipped teeth, grizzled, grey stubbles, failing memories and fading eyesight. We complained both to and at each other about anything we could find to complain about. We abused the traffic like our grandfather’s used too, (how and when had this happened to us?)  and we joked and laughed a lot, like we used to as teenagers. 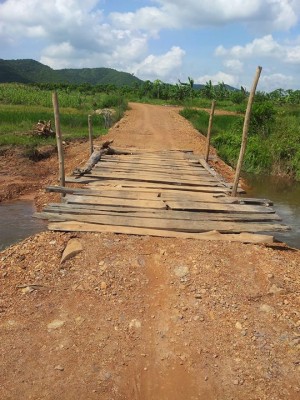 Then we over-shot marker 126, we turned back and found what we thought might have been it, off into the bush we bashed, rattling out on what looked and felt like and ox-cart track. Then we got hopelessly lost. No phone signals out here in the tundra, when we arrived at a rickety old bridge with some of its best and most vital features lying fallen on the creek-bed below, we realized we’d taken a wrong turn. None of us seemed to mind too much, there is something more than a little thrilling about being lost in the middle of nowhere, in a foreign country, no idea what is going to happen next.

We’d seen no evidence of our destination, no pepper crops in any direction, we were four old bastards looking to put a bit of spice back into our lives with a trip to our friend’s pepper farm. Baking in the noon-day sun, we’d found the heat, but not the spice.

The region was one of the final strongholds of the dreaded Khmer Rouge, when they finally chucked it in, (1998) they left behind plenty of land mines and UXO’s, (un-exploded-ordinance).

Some of us offered the first signs of worry, I was mostly worried about the copious quantities of wine in the trunk, it was chilled and well stored so it wouldn’t bake but, I didn’t think it would appreciate all the rattling around.

A bit of back-tracking, a few speculative turns here and there and we soon found ourselves on a slow, steady descent. What lay ahead took our breath away: the Kampot Valley opened up before us, ringed by rocky outcrops, ridges and sharp mountains; the lush, fertile valley spread out like a vast green quilt, sweeping out all the way to an ocean bejeweled with islands.

We were entering a dreamscape and we were now being transformed with every rattle and hum of the old Merc’s engine, our destination was in reach, our spirits were soaring. We had entered the land of the Elephant Mountains, The Secret Lake, and the Lost Worlds, Funan Shrines and ancient caves of Phnom Chhnork. By the time we finally found our charming hosts, Mark and Anna Hanna at their Starling Farm Pepper Plantation, it was time for a serious lunch and the first wines of the day; things were beginning to spice up! 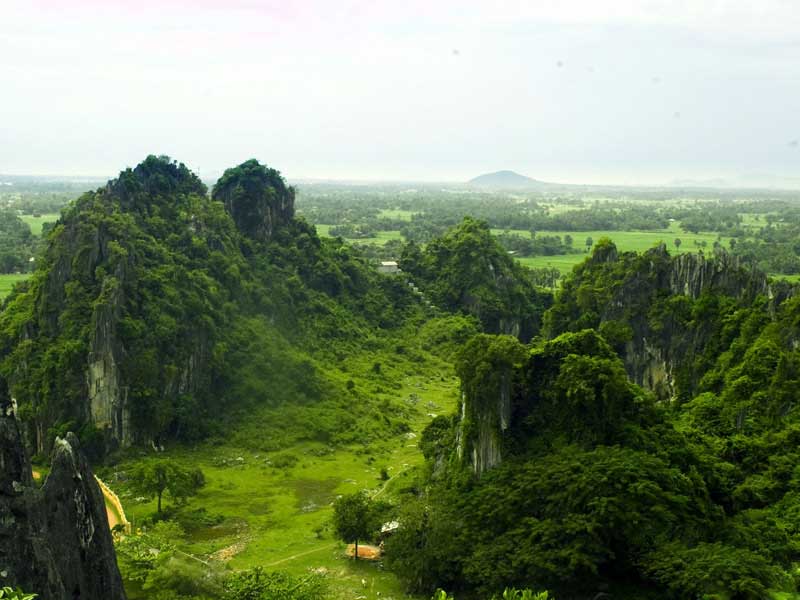