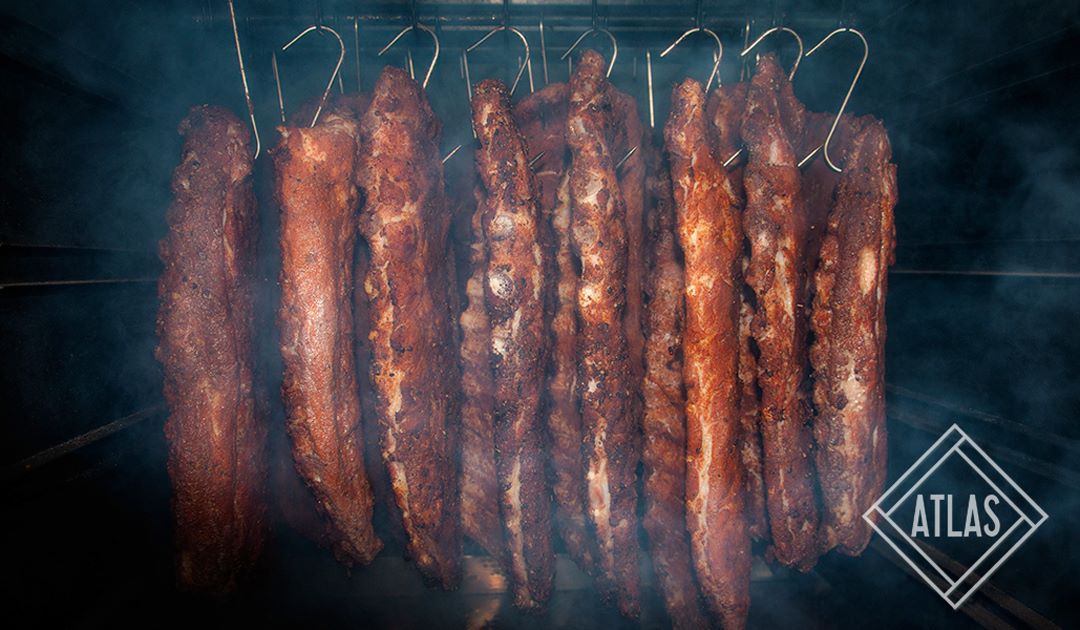 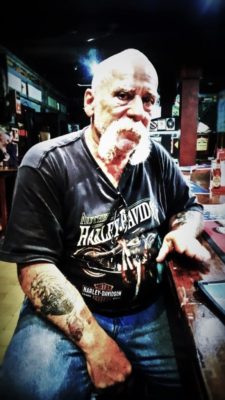 Tim Belcourt looks the part of an outlaw biker, a long white handlebar moustache gives him the appearance of a grizzled walrus, tattoos cover his forearms, there are lasting scars, on the inside as well as out. A veteran Harley rider who would regularly do a solo run from Singapore to Cambodia, just to blow out the cobwebs and perhaps outrun a few demons.

Tim was born in Montana, cattle country USA; his father was a butcher who used to ride around on an old Indian motorcycle. Tim remembers his love of playing American football and helping out his dad in the butchery, he tells me his old man was a better cook than his Ma and weekend barbecues where a regular treat, he looked forward to the day he would master the tongs and take command of the hotplate himself, he doesn’t say it in so many words but, he obviously idolized his father.

The young Montanan quit school at seventeen and immediately enlisted in the Marines, ending up in Reconnaissance, ‘Force Recon’. In the August of 1968 Tim Belcourt arrived at The Rock-pile, (Elliot Combat Base) in Quang Tri, north east of the infamous Khe San and closer to the DMZ.  Tim Belcourt was just eighteen years old, welcome to South East Asia.

By 1970 he was in a hospital stateside with leg wounds, he clams up and doesn’t talk about it, says it was ‘just one of those things that happens’. I learn that The Rock-pile was only accessible via helicopter and that in military operations ‘reconnaissance’ is the exploration outside an area occupied by friendly forces. The Marines Force Recon are special-ops forces that operated behind enemy lines on ‘deep reconnaissance’ and were sometimes tasked to perform ‘black ops’ and to ‘implement unconventional techniques for counterinsurgency warfare’. I know that over 13,000 Marines were killed in Vietnam and over 88,000 were wounded; the Marines in Vietnam suffered more casualties than both WWI and WWII combined. Fifty-seven were awarded the Medal of Honor. Tim says he was young and naïve and just looking to serve his country back then, he sees things differently now.

Tim struggled to settle back into life stateside as his injured legs hampered his military career, ‘they didn’t know what to do with me’. He eventually left and learned the electrical trade and this led to work back in Asia a place he said he felt drawn to after the war, he spent twelve years working in places like Singapore, Taiwan and Mongolia.

Having got his first motorbike at thirteen and working his way up to the cheapest Harley Davidson he could scrounge, he was now earning good money and riding a brand-new Harley around South East Asia. Thailand became a base and on regular visa runs to Cambodia he somehow fell in love with the place. Sharky Bar which opened in 1995 was an early and favoured watering hole.

He says he went out to get some milk in Thailand one day, jumped on his bike and never went back.

He built Reef Resort down in Sihanoukville in 2004 and enjoyed ten good years down there; it was a mid-priced resort with air-conditioned rooms and a swimming pool back when the only alternatives where high-end Khmer aimed resorts or $5 a night back-packer dives, he did well.

It was during this time that he reintroduced himself to cooking and decided that since he now had access to the ingredients and there was a gap in the market he would cook Tex Mex style cuisine. Tim is curious, fastidious and obsessive when it comes to cooking, he never stops tinkering and trying to perfect whatever he is doing, Reef became a constant renovation of barbecue areas, smokers, roasters and more. He bought a sous-vide machine to slow cook meats and was forever ‘experimenting’ with it.  Reef Resort’s restaurant soon became a must visit on any trip to Sihanoukville. 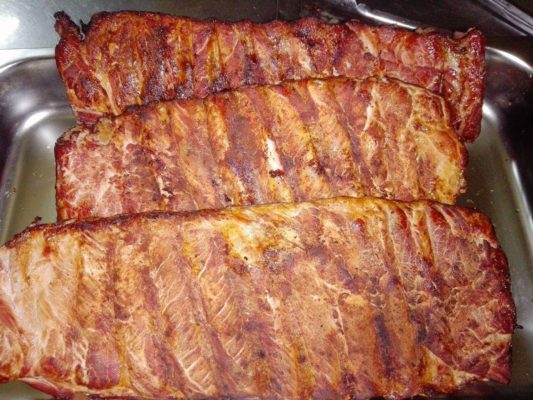 Belcourt sold the ‘Reef’ a few years back but soon became bored, so he decided to move back up to the big smoke of Phnom Penh, it’d been ten years since he last lived here. The old vet had come full circle and found his way back to one of his old haunts, Sharky Bar. After local legend and founder ‘Big Mike’ Hsu passed away there was a great deal of sadness and a fair bit of confusion at Sharky, it wobbled for a bit.

Mike was an institution, there is a much-revered picture of a very young Mike standing on the side of the stage with Jimi Hendrix in full swing at Woodstock, Sharky’s just wouldn’t ever be the same without him.

The remaining owners offered Tim the run of the kitchen and he took to it like a duck to water. He installed a custom-built smoker and loaded the menu up with his classics, from pulled pork sliders, smoked short-ribs, chicken quesadillas, jalapeno poppers, spicy chicken wings, soft beef tacos and taquitos.

The kitchen was humming for a while but Sharkey’s never really recovered from the loss of Big Mike, its talisman had gone, so the son of a Montana cattleman decided to move on, he moved his gear into storage and hung low for a while, there was talk of woman trouble, Tim keeps his own council, we didn’t see him round much for a bit.

Recently, Tim has resurfaced behind the grill at a new place up near the Russian Market in Toul Tumpoung called Atlas Grill, he’s even installed his custom smoker. The restaurant itself is a large space, plenty of seats, a decent sized bar. Atlas sits on Street 123, just a few blocks down the South side of Mao Tse Toung Boulevard. The Frangipani Hotel is nearby, as is Brooklyn Pizza, Alchemy is right next door and Dos Besos Mexican a block further south; the area has really come on in recent years as a dining precinct.

I checked Atlas out the other day for lunch and the menu was straight up American Heartland, Feel Good: beefsteaks, ribs, burgers, smoked, pulled, BBQ, grilled, as you like it. I liked it a lot. The son of a Montana butcher told me he was feeling more and more like his old man every day. I was pleased for him, it had been a while since I’d seen him and too long since I’d eaten his food. 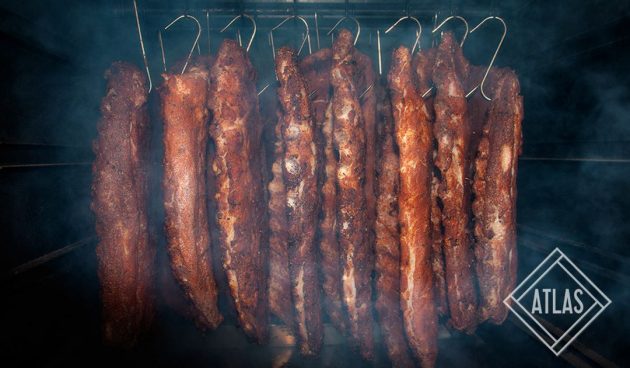 I watched him there behind the cutting board, trimming meat, set next to his prized smoker; cowboy hat on, wry grin under his grizzled, walrus mustache. Big, Popeye forearms with tattoos that looked like graffiti on ham hocks; small, gnarly and calloused hands on the ends, busy working an old blade that looked like it had been sharpened a thousand times. I realized you needed to let him go at his own pace, let him work his magic, at his age there is no point rushing it, the good stuff comes to you and its worth waiting for. When he gets it right -as he usually does- its Montana magic, the stuff of legend, tender, juicy cuts of impeccably cooked meat with those delicious, faintly familiar yet complex flavours of good ol’ ranch style cooking. Flavours that wash over your palate like a Texas flood and go on forever; rich, mouth-filling, intense and lingering: here meat and sauce combine to offer smoke, char, sweetness, umami, acidity and spice. 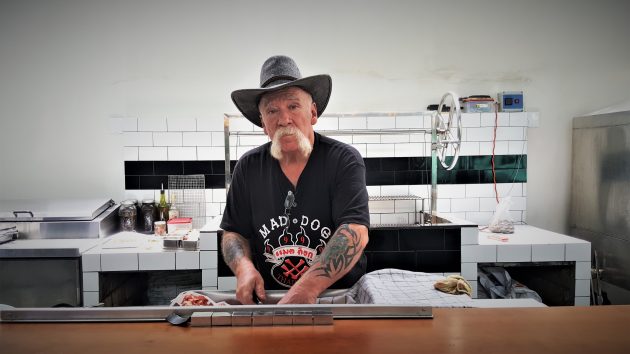 I don’t even want to have to order, ever I just want him to give me his good stuff whatever that is today, a nod and a wink at each other and here you go, this is what I want to share with you my friend, you pick the wine.

Atlas seems appropriate, there are times when he’s had the worries of the world on his shoulders and he has traveled half way around it and then some just to get here, but I’m glad he did, I’m glad he’s my friend and I’m glad he’s cooking again. 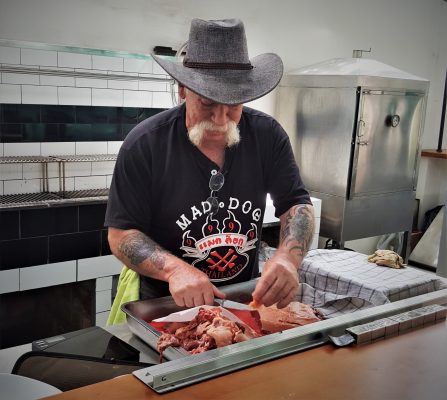 Tim says nothing makes him happier these days than smoking good meats, cooking good BBQ and watching good people enjoy it. He doesn’t have to ride a Harley across South East Asia to find inner peace anymore, cooking is his Zen. 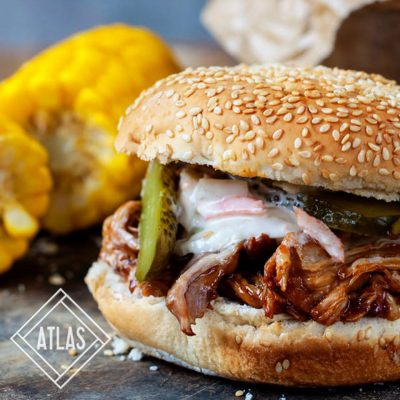