In researching my latest book on Cambodian Street Food, I have headed out on numerous expeditions to visit food stalls, roadside restaurants and pavement kitchens all over the capitol. Usually the modus operandi is that we out head before dawn in order to catch the many breakfast vendors and then we will often continue on until late afternoon, early evening. Feasting photographing, wandering and chatting to the many vendors and patrons we come across, filling up on food and reveling in the hustle and bustle of city life.

We are a small band of urban foragers, myself, our brilliant photographer and art director Piseth Penh, our long suffering translator and navigator Ms. Roth, the inspirational chef Luu Meng and occasionally a few others along for the fun. The days are long, hot, and sweaty, it takes persistence, dedication and a great deal of passion to get to the story at the heart of every dish. Sometimes that story is of the cook, a family history, sometimes it’s the venue and sometimes it’s the dish itself. 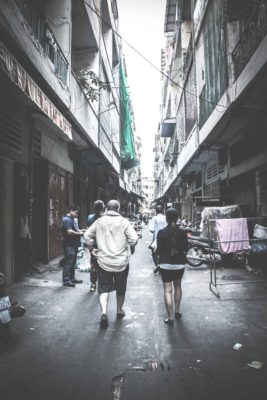 One morning Meng could not join us and in his place sent one of his trusted managers, Jimmy Campbell and chef Samnang, who possessed very fine cooking skills but very limited abilities with the English language. Given my Cambodian is rudimentary at best, this often makes life challenging, sometimes fun and more than occasionally, it can be downright hilarious.

We headed out in search of a small restaurant and street-side vendor near Wat Mongkol Voin behind the Peace Palace. Knowing that our purpose on these expeditions was to sample a famous or signature dish from a locally renowned vendor, I asked Chef Samnang what special dish we would be trying this morning.

In broken English chef cheerfully informed me that we would be enjoying a very famous dish which consisted of noodles and the genitalia of a female cow.

I must confess to being a little taken aback but chef assured me it was a local delicacy and a favourite dish amongst Cambodians.  I am not very brave and more recently, having been a traveler for over twenty years, living abroad for the past sixteen, I am no longer even that adventurous when it comes to the things I choose put in my mouth. However, I am prepared to make sacrifices for my art and today was definitely going to be one of those days. Jimmy and I exchanged quivering smirks and nervous laughter, cracked a few inappropriate jokes and generally tried to pluck up our culinary courage.

As I nervously waited for the dish to arrive my somewhat concerned looking photographer, Piseth asked me how to spell the name of the dish’s protein in English. I assisted him with the correct spelling, which he duly entered into the search engine on his mobile phone, this brought up several images on his screen, which meant that I was quickly able to confirm that he indeed had the correct spelling.

However, Piseth merely shook his head in the universal direction for ‘no’ and explained that it was not the female but the male genitalia we would be devouring for breakfast this morning. My already quivering insides did a little back flip; I think I nearly passed out for a split second before regaining what little composure I could muster.

Just as I was mentally digesting the fact that I was about to ingest my first penis and wondering how on earth I was going to physically keep it down, steaming bowls of chili oil and keyteav noodles began arriving at the table with what looked like a deep fried donut on top. 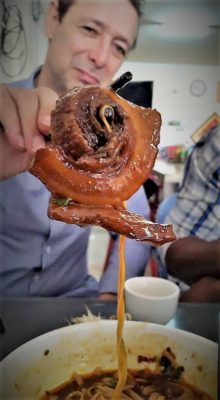 The bull’s penis had been butterfly cut and in the process of cooking, it had rolled up so it looked something like a deep fried donut, certainly and perhaps thankfully, totally unrecognizable as a penis. To taste, it is gelatinous in texture, all cartilage and gristle, with the faint flavours of a light beef-stock and spices.

They start braising the beefstock the evening before, and open the restaurant each day at 4am, by about nine in the morning all of the penis is finished. “People start coming the minute we open” a waitress tells me, adding that some will come from far way to try this famous penis dish.

Chef/Owner Ly Vanna is a short, stout, smiling man with a look of resolute stoicism written across his face, there is resignation, determination, happiness and comfort there. He informs me that it was his father’s business and has been open for 30 years. Vanna himself was a pastry chef at the Sunway Hotel; he used to work all night and then have to be on call for the breakfast shift.  He misses the bakery but, when his father became ill there was no question that he would leave the hotel to take care of the family business. 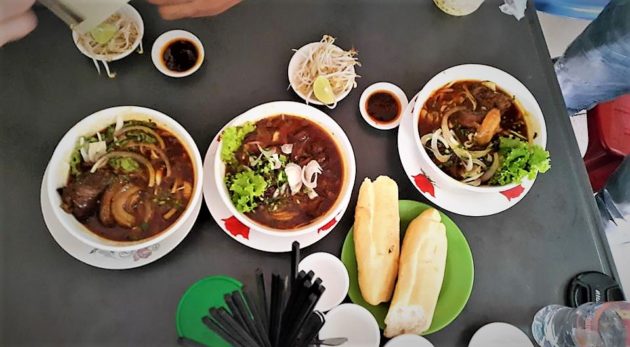 Vanna tells me that the penis is so popular that it is more expensive than the other cuts of meat; it is a ‘special meat’ he tells me and his father taught him how to prepare and cook the dish. The penis is cooked three times before it is served.  First the bull’s penis is boiled for 5 minutes, then removed and cleaned, then spices are added to the stock and it is boiled for three to four hours and then kept overnight. In the morning the Penis is boiled again and it is this long slow process that breaks down the sinew, making it less rubbery and giving it a nicer texture to eat. 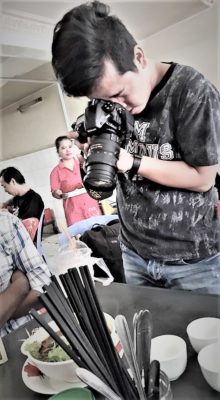 In truth there is a lot more going on here than people eating Bull’s penis for the flavour or texture; penis is eaten all over East and South East Asia and many other parts of the world for its perceived medicinal qualities and health properties. This type of folk medicine is known as organotherapy and usually has little science or fact to back up many of its claims however, these traditional beliefs still persist in many communities.

In Vietnam pho noodle soup is served with very thin slices of Bull’s penis where it is known as pho ngua pin lua. In the Philippines, road side vendors offer up the infamous ‘Soup Number Five’ which is a bull’s penis and testes soup. Chonginq ox penis soup is famous not only in China but throughout the Chinese Diaspora. 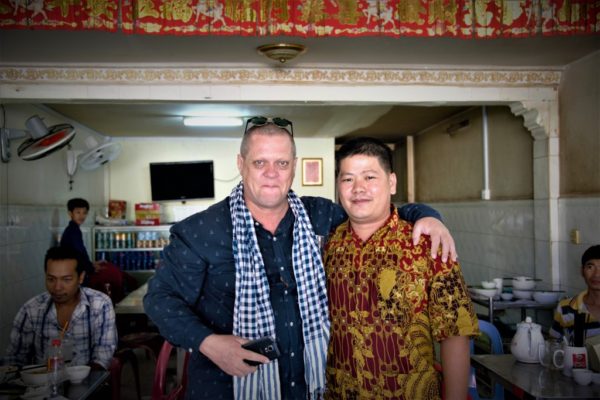 In researching Ly Vanna’s famous Bull’s Penis soup I discover that it is often referred to in the English language as cooked pizzle! No doubt to placate cook and travel book editors and publishing houses.

I didn’t register any increased virility or aphrodisiacal powers, nor did I find the dish one that I will be rushing back for. However, Mr. Vanna’s restaurant is full of happy customers every day and he sells as much pizzle as he can possibly manage to prepare and serve in his little shop house and roadside family restaurant. A chef who gave up his promising career as a baker in an international hotel to rescue the family business and support his ailing father, I can only wish him well. 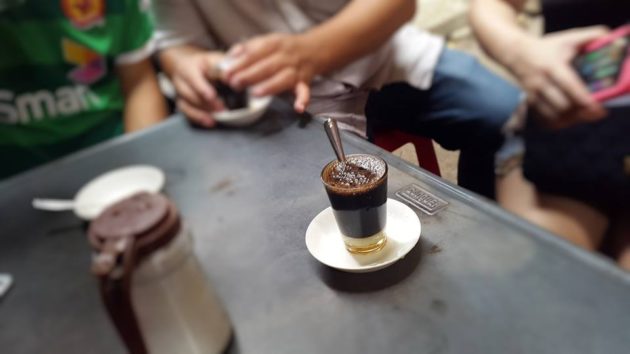