The modern concept of café culture is alive and well in Cambodia with the emergence of the successful local café chain Browns and the invasion of international franchises like Costa and Starbucks.

There is also a burgeoning local roasting industry with companies such as Rumble Fish in Kampot, Feel Good in Battambang and Three Corner Coffee in Phnom Penh blending and roasting imported and local beans. All do a fantastic job turning out high quality roasted blends

Arabica coffee beans require altitude and cooler climates and are imported from Laos, Thailand and Vietnam, whilst Robusta beans are grown in the Annamese Mountains through Ratanakiri Province and in Mondulkiri, Pailin and Kampong Cham. In Mondulkiri there has reportedly been some success with growing the ‘Catimor’ variety, a hybrid developed in Portugal in 1959, which is a cross between the Caturra Arabica variety from Brazil and another hybrid the ‘Timor, Arabusta’, which is itself a cross between Arabica and Robusta which was found in Indonesia in the 1940’s and cultivated for its disease resistance.

Coffee in Cambodia does have its underbelly as regulation and monitoring is almost non-existent. Coffee is sometimes ‘stretched’ with additives like scorched soya bean and corn and then coated in butter oil substitute and cooked with flavourings that may include potentially harmful chemicals. Branding low grade coffee from neighbouring Vietnam as Cambodian coffee is also a significant problem. It should be noted that in 1990 Vietnam produced 1% of the world’s coffee and by 2014 was recognized as the largest exporter of coffee in the world, overtaking Brazil. Much of Vietnam’s coffee is low grade Robusta; it was perhaps inevitable that bulk amounts of it would pour over the border for rebranding. 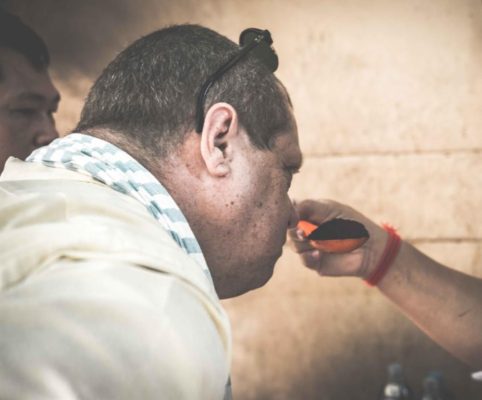 A result of recent droughts,(coffee is a water intense crop) unregulated cheap imported coffee and the relatively long period it takes coffee plants to yield, (up to six years) there has been a lot of pressure on local growers to give up on coffee and seek alternative crops. The Kingdom’s once promising coffee growing industry is in decline with the ministry of Agriculture stating that this already comparatively small agricultural sector has decreased in size over the last three years. This has seen a shrinking of hectares planted by as much as sixty percent and the Ministry of Commerce also reported that where Cambodia exported US $75,000 of coffee and coffee related products last year, at the same time it imported more than US $8 million worth of coffee.

Coffee has a long history in Cambodia and is a much loved beverage by many Khmers; it was introduced in the region by the French some time in the late 1850s.  A coffee tradition that has its origins in Hainan China is to have a strong, hot coffee in the morning with condensed milk and a chopped up length of Chak Vey, (youtiao in Chinese) the long, donut like lengths of fried bread that are just perfect for dipping in coffee and then eaten as a breakfast snack. 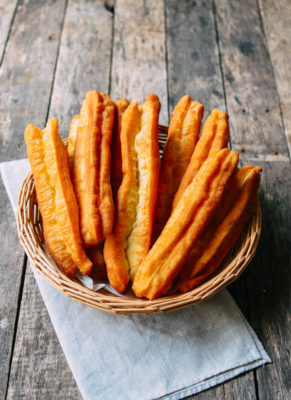 As the sun rises, sweetened, iced coffee with plenty of crushed ice is the popular choice, served in bags wrapped with an elastic band around a long-straw or now more often served in large plastic cups.

Mobile cafés have started springing up all over town, small vans and tuk tuks converted into mobile iced coffee carts or motorbikes with café’s for sidecars. I got a smile out of the enterprising young Khmer couple whom park their mobile café out the front of the Royal University of Phnom Penh every day and had branded it with the sign ‘Teenager Coffee’. 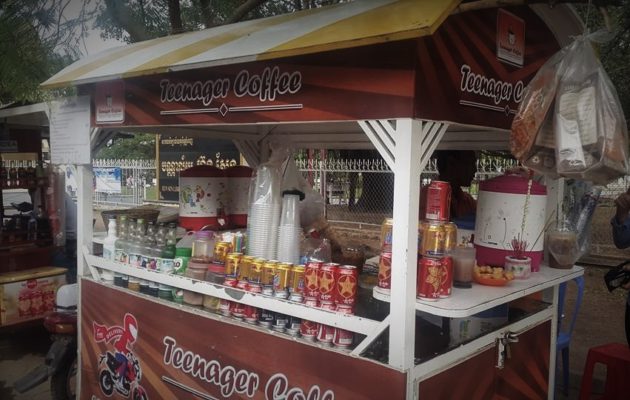 There is a long tradition of coffee stalls in Cambodia in the mode of a street food vendor, locals have their favourite brewers and sellers, and many have been in their chosen roadside spots for many years with a steady flow of regular clientele who will readily tell you that their preferred vendor has the best brew in the neighbourhood.

In the narrow little alley ways that run like a maze off the side streets around O’Russey market, local, street-side coffee vendors are doing a roaring trade in hot and iced coffee. Blends and ‘recipes’ are a closely guarded secret and there is a certain amount of pride in the reputations earned on the streets. More often than not, these are unregistered businesses paying local authorities a form of unofficial rent for their tiny patch of pavement; few are comfortable with talking to strangers wanting interviews.

In a grubby, hot and steamy lane full of vendors, parked motorbikes and urban kipple I stumble into what at first appears to be a portal to a lost dimension, an ancient charcoal brazier stands near me in the laneway, a confusion of pipes, pots, kettles, tin cups, glass jars, rubber hoses, pvc, taps, knotted rags and cloth filters, it looks like some sort of ancient steam contraption that might have been sketched by Leonardo da Vinci. 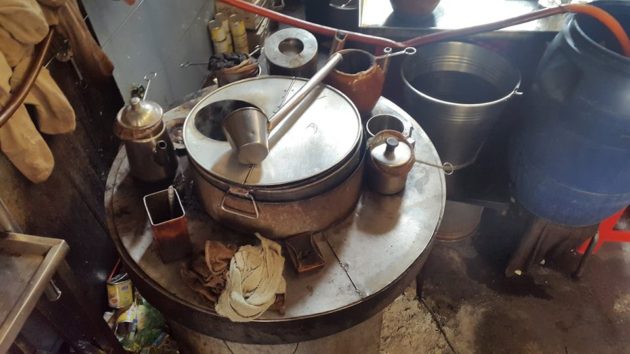 I can’t begin to comprehend how it all works, the lady operating the various moving parts of the old boiler apparatus won’t even tell me her name. Her mother sits next to the cash tin, a proud looking old woman with her life etched in the lines on her face, Ma Yay sits on a low stool with her hand on her knee looking somewhat defiant; she has been here for twenty years, serving up coffee as strong as granite and as black and bitter as your ex-lover’s heart. You can soften the blow with great globs of condensed, sweetened milk from a can so it’s a bit like wrapping velvet around a sledgehammer. The coffee is from Laos and Ma Yay says there is no secret, it’s just damned good coffee. 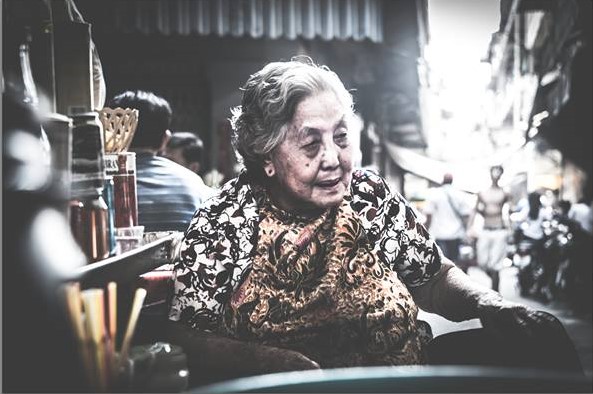 Next we head behind O’Russey Market to the Bak Touk area and meet Mr. Tang Sok Lay who, for the past seven years, has been waking up at 3am to grind and filter his Vietnamese coffee before bringing great bags of it to his spot on the street serve iced coffee black or with sweetened milk. Sok Lay claims his coarse grind and steel sieve allows more flavour into his beverages, it’s a palpitating explosion of bitter sweet defibrillation that has a strangely addictive allure. Sok Lay’s wife is making coffee as fast as she can to keep up with demand as customers wait three deep at the little counter on the roadside. Cars pull up and people jump out to collect bags of coffee, business here seems to be booming. 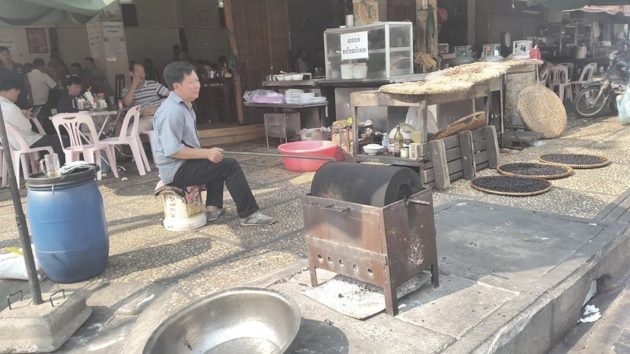 A few blocks back from the river I see an old man sitting on a low stool on the pavement, constantly turning a metal handle attached via a long pole to a metal drum full of coffee, rumbling around endlessly over hot coals, wicker baskets of roasted beans lay out in the sun, grime and exhaust fumes next to him.

In Boeung Keng Kang 1, I sit in an air-conditioned space decked out with all the requisite, manufactured, faux café culture items of a modern, western style café, sipping a soulless café latte whilst watching everyone else in the place stare down at a screen of some description, be it mobile phone or laptop. The disconnection and dichotomy is palpable, real coffee in fake outlets or the very real possibility fake coffee in the gritty reality of the streets of Phnom Penh, take your pick and I don’t mean a selfie! 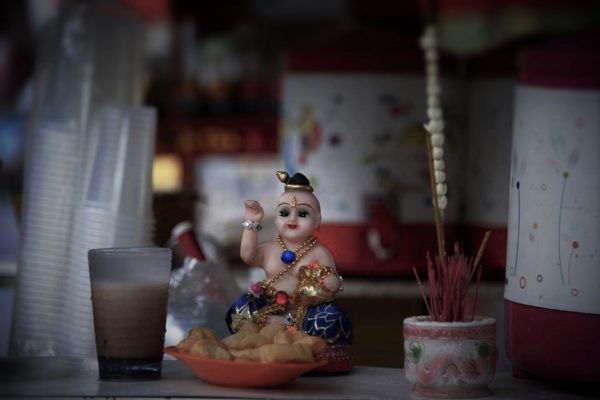