As Asia’s emerging economies continue to perform strongly and the sheer number of people classified as middle income earners grows exponentially, their dietary habits and demands change and this in turn has seen a dramatic increase in the demand for quality beef across the region, with Cambodia being no exception to this phenomenon.

New laws regulating the quality of domestic and imported meat products and livestock passed in January of this year and an agreement between the respective governments to allow live cattle exports from Australia to Cambodia paved the way for the recent opening of Cambodia’s first live-cattle feed lot and a state of the art abattoir by SLN Meat Supplies.

Australia is the world’s largest producer of cattle and the world’s largest exporter of beef, with live beef exports in strong demand to offset the high cost of feed and production in Australia. The first shipment of almost three thousand cattle from Darwin, Australia arrived last month and included Brahmans, Charolais, and Brahman/Angus, and Brahman/Hereford cross breeds. So far all breeds have apparently fared well, eaten plenty of grain and fattened up nicely before slaughter.

David Tea, an Australian born and raised Cambodian returnee is the Phnom Penh distributor of the meat and he recently organized a special dinner to showcase some of the less popular cuts of beef to show they can still be very enjoyable if prepared the right way. A few days later he then hosted a trip down to the abattoir, which is on Route three in Preah Sihanouk Province.

The dinner consisted of a Beef tartar made from aged rump, an oxtail ravioli in a beef consommé, a silverside schnitzel and a roast rump in a Kampot green pepper sauce.

The tartar was tender, tasty with good texture and a fine subtle peppery spice. The oxtail ravioli was rich in flavour and exceptional in quality and preparation, the consommé was rich, reduced and concentrated, my only fault with it that it was a little too salty for my personal taste. The Silverside, a notoriously tough cut of beef had been pounded and tenderized with a meat mallet until it was wafer thin and then coated it in breadcrumbs, the result was a dish of excellent flavour although it was still a little on the chewy side. 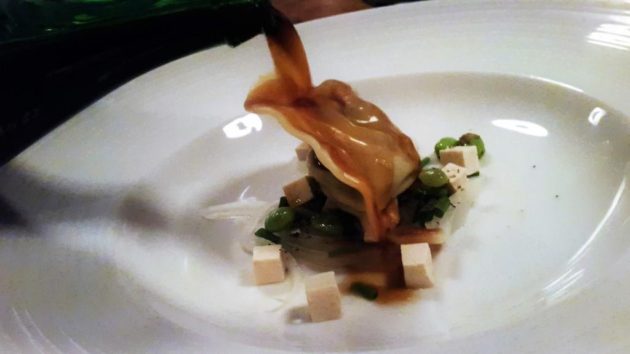 The rump roast was tender, succulent and well-seasoned, served alongside some fresh, un-aged beef it proved a revelation in flavour intensity. All up I felt the dinner was a great success and was intrigued enough to want to try some of the more popular cuts, done in more traditional manner, such as a good old fashioned barbecue.

The visit to the abattoir was fascinating, I was staggered to see the sheer size and scope of the investment, which I was informed was somewhere in the vicinity of thirty million USD. Business for the first shipments of beef must be brisk because there is already construction of another large feed lot taking place. Once shipped and transferred to the feed pens, the cattle are given time to settle down and recover from their week long journey, they are fed a combination of local grass, corn and cassava. 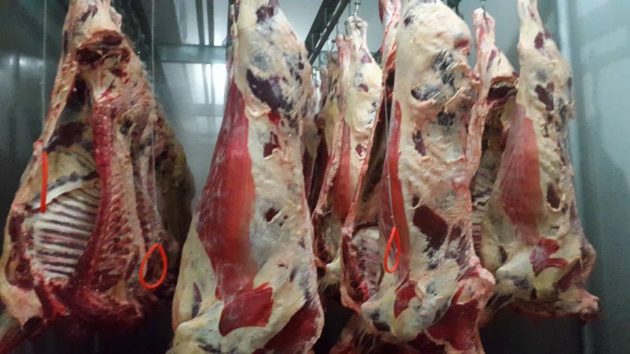 The abattoir itself is brand new, clean and includes the latest equipment from Germany and Australia. The facility had to meet strict standards of both the Cambodian government and the Australian government’s Exporter Supply Chain Assurance System. These rules are in place to safeguard quality and hygiene and ensure that international animal welfare standards are followed at all stages of the export process, including slaughter at the abattoir.

SLN is hoping the local market will soon develop a taste for unfrozen, chilled and affordable imported beef and is also readying for exports to Vietnam and China.

Another benefit of importing live cattle is that there is a market for every part of the beast with hides, innards, tails and bones in demand. During my ongoing investigations into Cambodian street food I have already eaten bull’s penis noodles and cow’s hoof soup, so there is no part of the animal that goes to waste.

The Beef is currently sold vacuum packed and I suspect anyone who has ever shuddered at the sight of the old lady at their local market brushing away bloated flies as she weighs your roughly cleaved chunk of raw beef would only envision enormous promise for the venture in future. 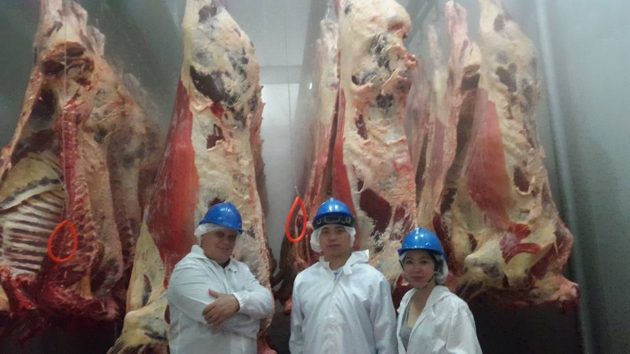 The Scent of Jasmine & the Goddess of Dance