Beechworth is a small Victorian town with a population of approximately 3,000 people. The township itself is picturesque and striking with its old settlement buildings made of local stone and granite, perched precariously on a hillside on the continental side of the Victorian Alps. Originally known as Mayday until the discovery of gold in the region in 1852, at the height of the gold rush Beechworth was said to have around thirty to forty thousand miners camping in settlements around the town, with sixty one ‘drinking establishments’ scattered throughout these settlements. Beechworth was soon the financial and administrative center of North Eastern Victoria, numerous public buildings were erected at this time, such as a hospital (1856), a hospital for the aged, a mental asylum, a flour mill (1855), law courts (1855) and, of course, a gaol was an early necessity (1853).

The first local member was elected to parliament in 1855, the year the first local newspaper was established and the formalization of the township can be seen with the 1856 layout of roads and footpaths and the prohibition of canvas-built shops and homes. Today, Beechworth has been described as the best preserved gold mining town in the entire country, the early commercial and public buildings erected from the honey coloured local granite are enduring features that continue to serve this very pretty town as a popular tourist destination.

Prospectors came from all over the world to Beechworth during the gold rush and it is said to have had the largest Chinese population in the country outside of Melbourne, with an estimated 7,000 on the local fields by the early 1860s. They worked hard, often intensively working claims abandoned by others, and established market gardens and tobacco growing. European resentment and racist sentiments led to a riot in the Buckland Valley in 1857 which saw Chinese miners bashed, robbed and killed. The man sent to deal with the disorder was Robert O’Hara Burke who, in tandem with William Wills, led the first expedition to travel north-south across Australia. He served as superintendent of police at Beechworth from 1854 to 1858. The pistol that lay beside his body, when it was found at Coopers Creek, was inscribed ‘Presented to Captain Burke by the residents of Beechworth, Victoria’. Beechworth Cemetery has a large preserved section of early Chinese miners and pioneers. 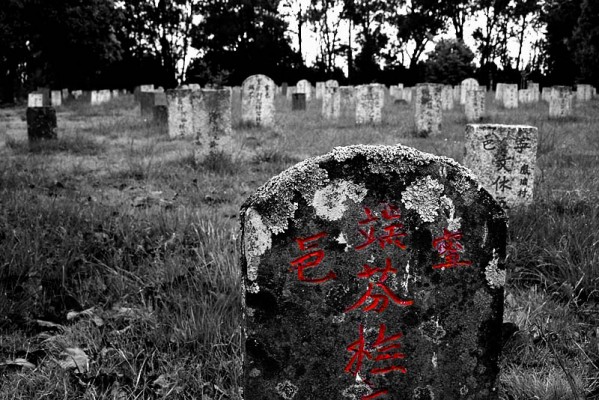 One of the more interesting public buildings of the time was the Mayday Hills Lunatic Asylum; it was one of the largest institutions in Victoria. Opened in 1867 the building housed thousands of people described as “Lunatics”, “idiots” and “imbeciles”. Closing in 1995 after 128 years of operation, at its height, Mayday Hills consisted of 67 buildings and was home to over 1,200 patients and 500 staff.

The property included 106 hectares of farmland, making the hospital self-sufficient with its own piggery, orchards, kitchen gardens, fields, stables and barn. For recreation, the asylum included tennis courts, an oval and cricket pavilion, kiosk and theatre.

People could be admitted to the asylum as a lunatic patient by a number of means:

Today the Asylum hosts a successful ghost tour business and there are plenty of stories told about Mayday Hills Asylum, one of which involves the figure of a man who appears near the cellar, and then completely vanishes! 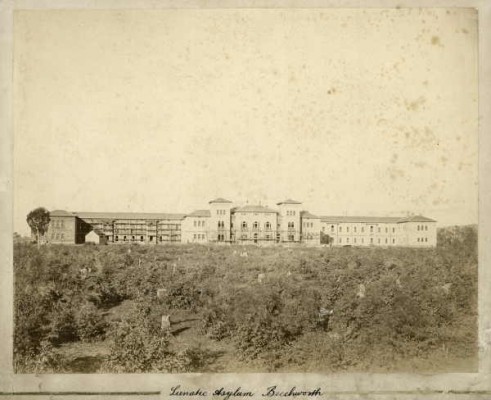 A golden horseshoe is the official town logo and a golden horseshoe monument sits just outside of the township, the town holds a local Golden Horseshoe Festival each year; all in commemoration of a fascinating local legend.

As surface gold began to dry up miners resorted to two distinct types of mining and fell into two distinct camps, ‘Punchers’ would divert water and punch holes in the creek beds, whilst ‘Monkeys’ would scamper into the hills and blast for gold. Monkeys wore bright sashes and colourful shirts, braided the manes of their horses and were said to have a flamboyant individuality; Punchers on the other hand dressed in long Napoleon boots and were decidedly less stylish, they tended to work in gangs for a boss and were of a more serious and taciturn nature. There was serious tension between the two parties, which often lead to violence when they met in town.

One of the first big gold strikes in the area was made by an American 49er by the name of ‘Lucky’ Johnstone, having made his fortune, Johnstone was determined to see a miner and not a shopkeeper or, a squatter win the region’s first ever politically sanctioned election to the new Victorian Legislature. 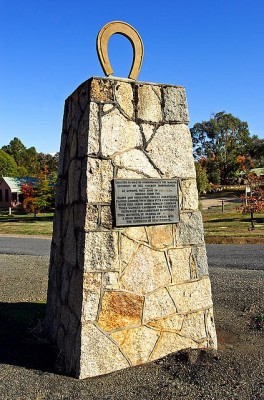 The legend has it, that a set of golden horseshoes were made from gold supplied by Johnston, owner of the Woolshed field’s richest claim. The idea was for his candidate, Mr. Daniel Cameron to ride into town on polling day on a horse shod with golden horseshoes.

On the big day, a procession of flag-waving, banner-carrying ‘Monkeys’ marched to Beechworth from the Woolshed diggings. The golden horseshoes were not fitted to the horse until the procession reached the old Vine Hotel, one mile from Beechworth, and they were removed upon arrival into town. The story goes, that the shoes were one ounce lighter after the one mile!

Huge crowds, free beer and brass bands added to the day’s chaos, and although at one stage the police placed a cordon across the main street, they eventually gave up trying to control the crowds. Finally, the two main candidates, (a monkey and a puncher) appeared at the balcony of the Star Hotel and by a show of hands (holding their miners’ rights documents) – Daniel Cameron, the man with the Golden Horseshoes – was declared elected.

It is no surprise that the ‘Puncher’ demanded a recount, which was duly held at the Courthouse the following day. Cameron was again declared the elected candidate and “Lucky” Johnston celebrated the win with a 300 pound champagne shout at which patrons were said to have drunk Champagne from ‘six to six’.

Legend also has it that when Lucky Johnstone finally departed Beechworth with his fortune, he threw another enormous party and spread a grand table indeed. During his perfunctory speech, he is said to have asked guests to ‘mind an eye’ for the one and five pound notes that had somehow found their way into the sandwiches.

As gold began to dry up in the region diversification began to appear, viticulture is believed to have begun in the late 1850’s with the local newspaper recording a Mr. J. A. Rochlitz having planted a vineyard and a German, Mr. Zimmerman having purchased land with the intention of planting vines and producing wine. The Melbourne Victorian Exhibition of 1861 included 9 wines that were exhibited John Richmond from Beechworth, and included an 1863 Hermitage and 1864 Chasselas, both of which received honourable mentions. In May 1892 the Report of the Secretary of Agriculture listed 32 grape-growers in the Beechworth district with 124 acres under vine, the local wine industry was at its peak but the gold in the region had all but dried up and there was even worse to follow from this promising new wine region.

Buy 1901 the region’s plantings had shown a contraction to 103 acres and wine production was at 10,416 gallons; by 1910 this had been reduced to just 33 acres. In 1916 the region recorded just 6 acres of vines and production of just 30 gallons. The probable invasion of phylloxera -which was first discovered in Rutherglen in 1899 and spread through the north east of the state probably had some effect- although Beechworth’s area under grape cultivation had been in decline since 1893. The dwindling gold fortunes of the district certainly played a part and the outbreak of the Great War all but finished it off, the region’s once promising enterprise as a wine region was at an end.

All of Beechworth’s vines disappeared from the district with the possible exception of some small vineyards kept for personal wine production until 1945, when Vin Capriotti established 5 acres at Everton Hills, being of mixed varieties sourced from Chateau Tahbilk. The property was purchased by Brown Brothers of Milawa in 1950 who increased the plantings to 40 acres. The last vintage produced by Brown Brothers from this vineyard was in 1978, and the property was sold due to low yields. While the vineyard was maintained and grapes sold for quite some years after the sale by Brown Brothers, the vines finally fell into neglect and today none remain.

The revival of the Beechworth area can be credited to the Smith family who planted Chardonnay and Cabernet Sauvignon in 1978; and former Brown Brothers winemaker Rick Kinzbrunner, who established his Giaconda vineyard between Everton Hills and Beechworth in 1980.