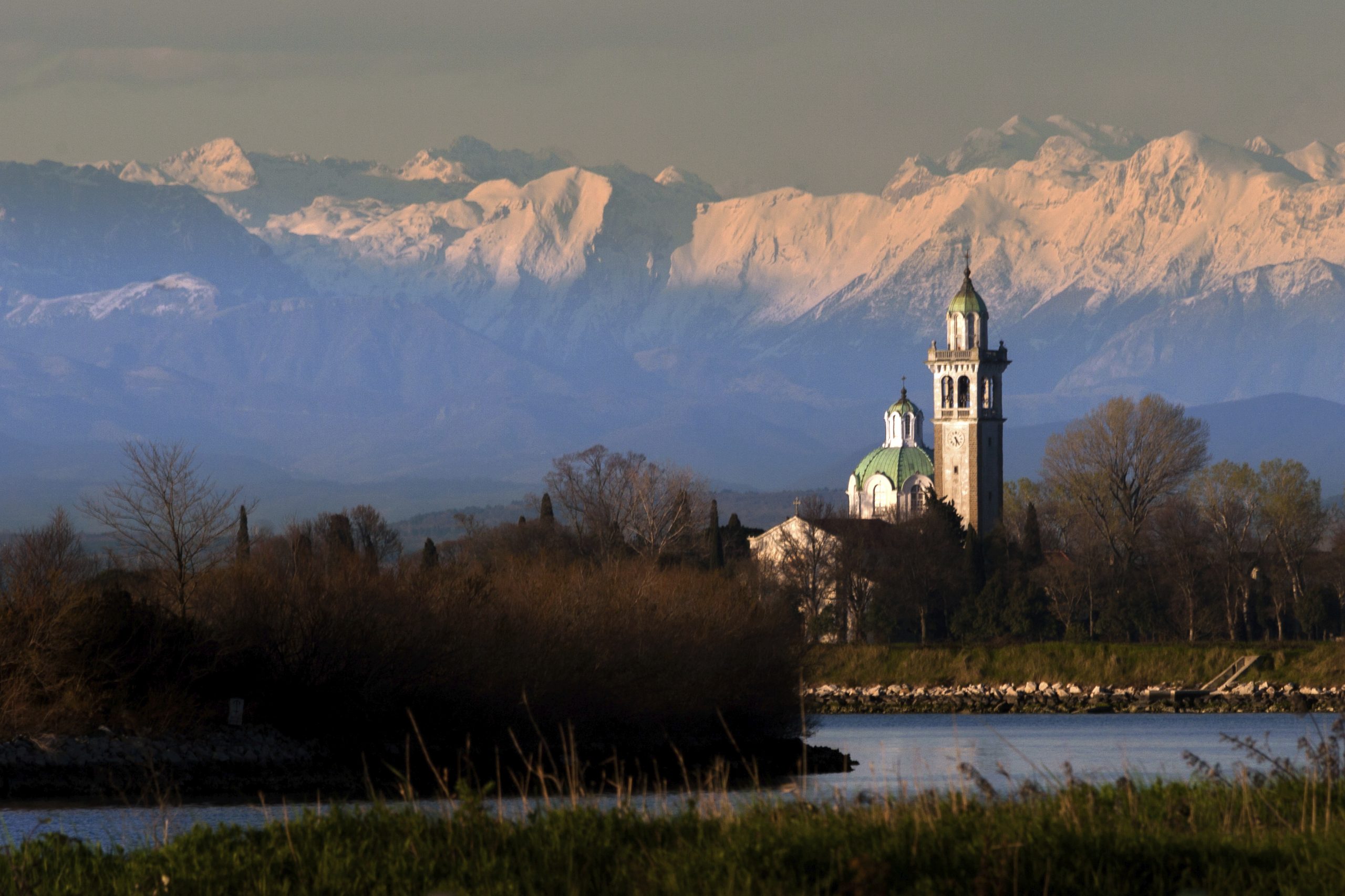 ‘And Jacob went out from Beer-sheba, and went toward Haran. And he lighted upon the place, and tarried there all night, because the sun was set; and he took one of the stones of the place, and put it under his head, and lay down in that place to sleep. And he dreamed, and behold a ladder set up on the earth, and the top of it reached to heaven; and behold the angels of God ascending and descending on it. And, behold, the LORD stood beside him, and said: ‘I am the LORD, the God of Abraham thy father, and the God of Isaac. The land whereon thou liest, to thee will I give it, and to thy seed. And thy seed shall be as the dust of the earth, and thou shalt spread abroad to the west, and to the east, and to the north, and to the south. And in thee and in thy seed shall all the families of the earth be blessed. And, behold, I am with thee, and will keep thee whithersoever thou goest, and will bring thee back into this land; for I will not leave thee, until I have done that which I have spoken to thee of.’ And Jacob awaked out of his sleep, and he said: ‘Surely the Lord is in this place; and I knew it not.’ And he was afraid, and said: ‘How full of awe is this place! this is none other than the house of God, and this is the gate of heaven.’ The wine region of Friuli Venezia Guilia is the border region between Veneto and the neighboring countries of Slovenia and Austria and runs from the Adriatic Sea to the Dolomites which lead up to the Southern Alps, the highest peaks in all Europe. Truly, these are ‘colli vicino a dio’, hills close to god. 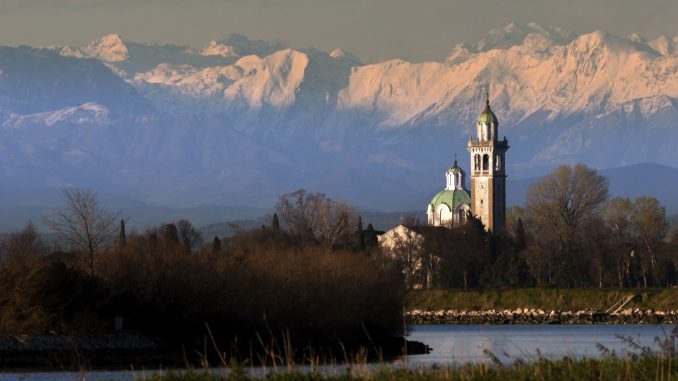 The area was once under the reign of the Venetian Republic and has at various times fallen under the rule or influence of Attila the Hun; The Romans; The Goths; Lombards; Germans; French; Austrians; Yugoslavians and Italians. In fact, the region has been passed from empire to empire for over 2,000 years and today it is both all of them and none of them. The capital city and major province, Trieste only officially became part of Italy with the signing of the treaty of Osimo in 1977 and today, it is a region that stands apart for a uniqueness and a diversity born of its many influences.

The largest sub-region is Friuli Grave so called -like its namesake in Bordeaux- for the tell-tale gravel soils and polished pebbles of ancient river bed, known locally as ‘magredi’ soils. Aside from the capital Trieste, other major communes are Pordenone and Udine. 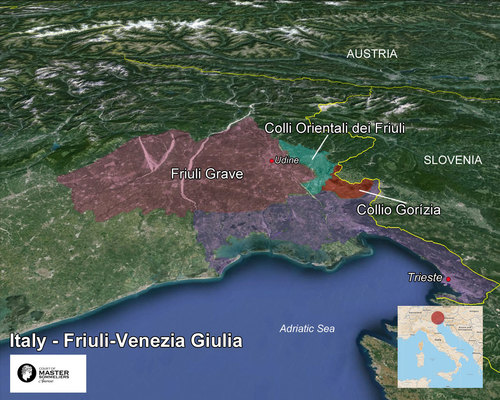 The historical capital of this area is without doubt the town of Udine, initially established as a hilltop outpost by Atilla the Hun as he laid siege to Aquileia. By 983 AD, when the castle of Udine was donated by Pope Otto II to the Patriarchs of Aquileia, it was already recognized as a significant township.

The Patriarchal Palace of Udine is one of the most historically important buildings in the city, situated near the Piazza Primo Maggio, just a few steps from the city center. 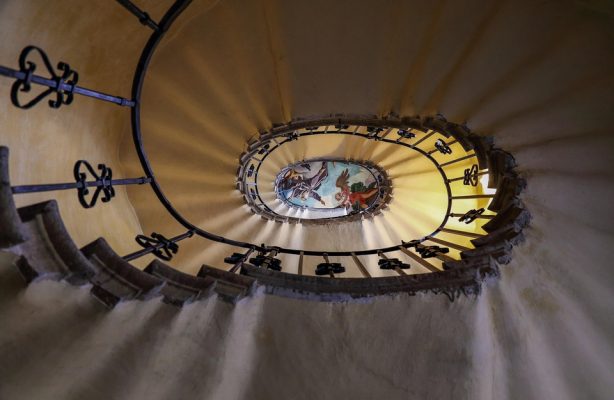 Giovanni Battista Tiepolo (1696 – 1770) was a prolific and extremely gifted Venetian painter, considered a great master of the Rococo period, he worked in Italy, Germany and Spain and found success right from the very beginnings of his career.

Several of his major commissions came from the Dolfin family and Dioniso Dolfin, the Archbishop of Udine in Friuli, employed Tiepolo to decorate a chapel in the cathedral at Udine. He then commissioned the young artist to paint a cycle depicting episodes from the lives of Abraham and his descendants (from the book of Genesis), at his Patriarchal Palace (the “Arcivescovado”) which Tiepolo completed between 1726 and 1728.

The British art historian, Sir Michael Levey said of the work that ‘Despite their elevated subject matter, they are bright in colour, and light-hearted in mood’, describing them as, ‘a shimmering set of tableaux, full of wit and elegance’. The German art historian, Margot Wittkower noted that Tiepolo used a much cooler palette than previous Venetian painters, in order to create a more convincing effect of daylight.

On the main ceiling is the Sacrifice of Isaac, and two complimentary works, Hagar in the Wilderness and Jacob’s Dream. On the ceiling of the Sala Rossa, (Red Room) is The Judgement of Solomon, surrounded by the prophets Isaiah, Jeremiah, Ezekiel and Daniel.

The Web Gallery of Art comments on the work noting that “The subjects chosen for the pictures were intended to reinforce the legitimacy of the ruling patriarchy, which at that time found itself at the center of a fierce politico-ecclesiastical struggle between Venice and Vienna. The decoration of the Patriarchal Palace in Udine unquestionably represents the high point in Tiepolo’s early career. By portraying figures in 16th century dress, and placing them in landscapes bathed in sun and light, he recalls the magnificently staged scenes of Veronese. The decisive element in this project must be his sense of the theatrical, where the respective subject matter of the picture is presented in a dramatically staged scene. Each figure is assigned a primary or secondary role and the relationships between the protagonists are elucidated by means of a masterly handling of colour. Tiepolo thus transformed the revival of Veronese’s art, also favoured by his contemporaries, from a mere stylistic fashion into a pictorial language that was to confirm his own reputation as a representative of the Venetian tradition.” 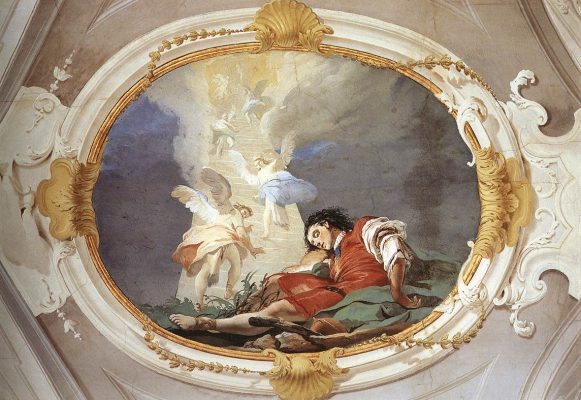 In the painting ‘Jacob’s Dream’ Jacob lays down asleep in a field, he is resting his head on a rock. Rising behind him is the representation of his dream, a ladder to heaven with angels arriving and descending. This is a visualization of the the tale from the Book of Genesis in the Old Testament and Jacob’s Ladder is the colloquial name given to the stairway that appeared between heaven and earth. It does not take more than a little imagination to see it as perhaps a representation of the Friuli Grave region itself, producing elegant wines with restraint and finesse, light, crisp, these are ethereal whites that flutter on the palate like the beating wings of angels, a purity of fruit finishing with the cleansing absolution of minerality.

The neighbouring sub regions of ‘Friuli Colli Orientale and Colli Goriziano are perhaps even a little further up the ladder, just as they are higher up on the hills. Here the vines are planted in the ‘Ponca’ soils full of marine fossils and marl; brought up by the same tectonic upheaval that created the Alps.

A little taste of Italian paradise, this is an exquisite Pinot Grigio from the ‘Grave del Friuli’, the gravel soils and the cool climate, influenced by the Adriatic Sea and fed by the braided rivers of North East Italy, (the Meduna, Cellina & Tagliamento). The region produces some of the world’s finest examples of Pinot Grigio wines. 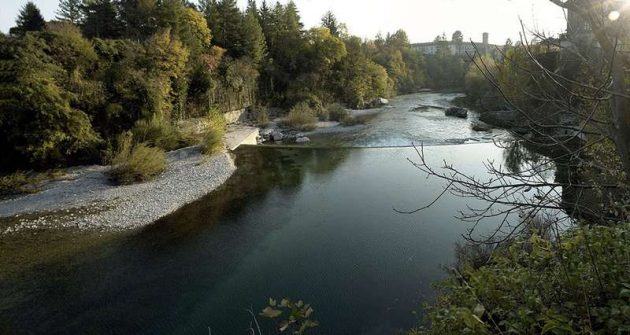 The Aquilani Pinot Grigio is translucent in colour with flickers of lime, the bouquet is restrained and perfumed with acacia flowers, pear, persimmon, green mango and chalky, talc notes.

The palate shows an elegant, light and refreshing wine with impressive poise and structure.

Flavours of citrus, pear and green apple are pristine and crystal clear, set against a backdrop of delightful, fine talc-like minerality.

This zesty Pinot Grigio is an ideal match with Spicy fish salads, Vietnamese rice-paper rolls, shellfish dishes, poached white meats, poultry and vegetable entrees including risotto. Enjoy whilst the wine is young and fresh or drink over the coming 2-3 years. 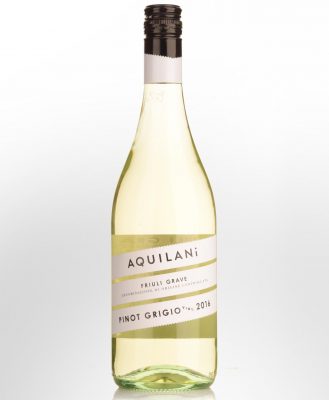