October in Cambodia is all about Pchum Ben, a Buddhist observance that lasts for 15 days during mid-autumn of the Khmer chhankitek, (lunar) calendar, in the month of Phutrabot.  The festival is the most important of the year, along with Khmer New Year and generation after generation of Cambodians have observed and celebrated this festival, both living and dead!

Pchum Ben coincides with the approaching end of the rainy season, a time when monks adhere to the practice known as Vassa and remain in the one temple for three lunar months. Whilst a Buddhist festival Pchum Ben has connections to the ancient Khmer sprit worship known as Neak Ta. Neak Ta is many spirits and it is one spirit, a sort of spiritual omnipresence that watches over the people, their village(s) and the entire nation of Khmer people who were born from the naga.  Pchum Ben is a time when ghosts wander among the living.

Following the principles of karma and reincarnation it is believed that those with too much bad karma cannot be reincarnated, instead they become tortured ghosts said to have tiny mouths and distended bellies, starved of food and scorched by the fires of hell. 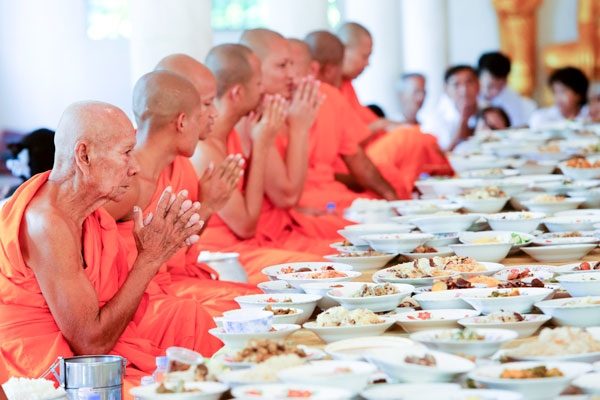 At the beginning of Pchum Ben, Yama who is ruler over all the levels of hell opens the gates to his dominion, allowing these punished and tortured souls a moments respite and a shot at redemption. It is the only time of year that these hungry ghosts may receive food and it can only be transmuted by monks at their temples to the plane of the spirit world.

Cambodians will prepare special, preserved rice dishes, dress in funeral white shirts and blouses and visit either their own village temple seven times or, in the cities they will go to seven different temples in order to feed and bless seven generations of their ancestors. Monks chant ancient suttas in pali day and night and receive these ceremonial snacks as acts of making merit. The monk will offer blessing and merit is passed like credit to the souls of the dead. Some people can be seen throwing rice balls into the air believing that some of it can be directly received by the spirits. It is believed that the ghosts who are well fed, blessed and transformed into benevolent spirits will in turn bless the coming harvest, whilst those who do not find food may blight the crop with a terrible curse. 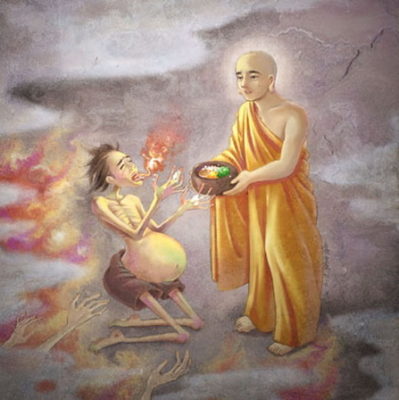 It is a beautiful time in Cambodia, the fields are lush with the verdant young rice and villagers put on their finest temple clothes. The 15th and final day of the festival, Pchum Ben Day marks the start of a two-day public holiday in Cambodia; villagers dress up their local pagodas and then celebrate. The finals days of Pchum Ben are a celebration of the village, a celebration of life and usually, one mighty big party.

There earliest references to Pchum Ben are carved into a dam wall built sometime around 900AD, whilst it is believed the festival was revived by King Ang Doung sometime between 1840 and 1860. 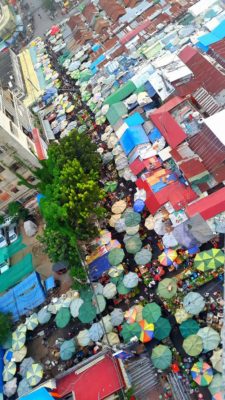 Kandal Market is a traditional Cambodian market next to Wat Onalum in the capital, much of it appears held together with weathered timber and sheets of rusty tin. Houn Chanthol has been here for 20 years selling traditional Khmer ceremonial snacks, starting at 7:30 in the morning she stays until the snacks run out which is usually about 10am, She sells ten kilos worth of rice per day on average but, during Pchum Ben she sells three times that much. When Chantoul returns home she begins preparing the next day’s batch. 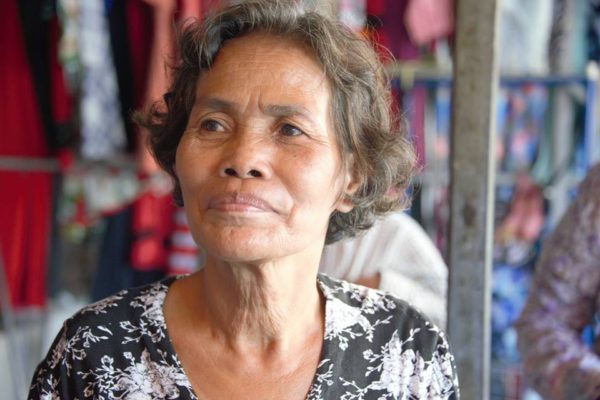 Chanthol is satisfied that she makes the best Num Kom in the city; she knows this because some years back the government held a competition to see just which vendor produced Phnom Penh’s best and the mayor declared Houn Chanthol the winner. She tells me this without a hint of pride or even joy, it is just a matter of public record, hers is the best in town.  A steady stream of customers adds further weight to her credentials and she tells me she has not made enough today and will disappoint many of her regular customers.

Chantoul informs me that she focuses on every step of the process when making her Num Kon and the selection of the best rice is critical. The rice paste, palm sugar and coconut milk snack is filled with red bean it is silky, sweet and delicious; the ghosts will be pleased. 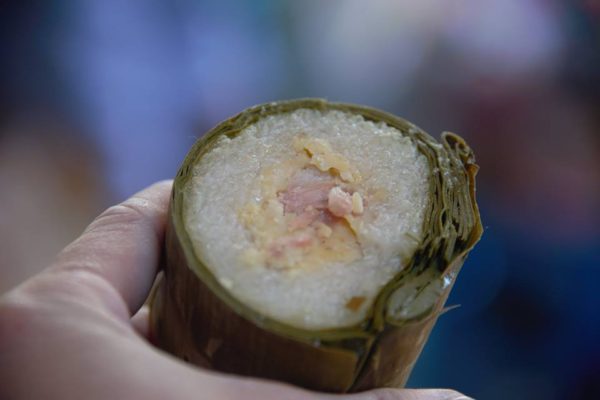 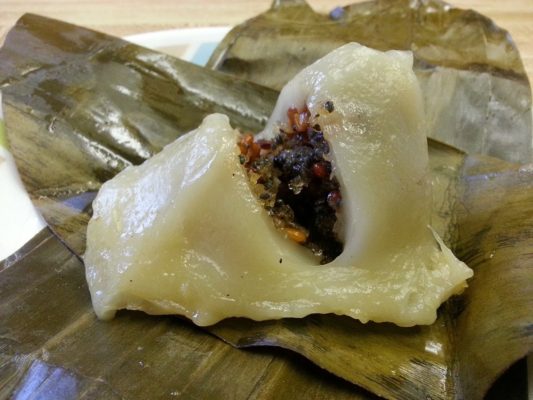