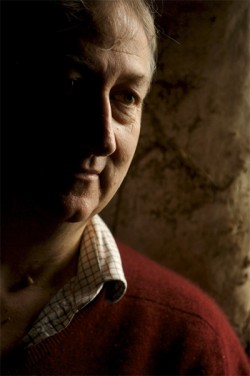 Ronald Brown is the owner of the remarkably overachieving South Australian winery Maverick, in the Barossa Valley. The winery is aptly named, Brown is every bit the Maverick.

Described by eminent Australian wine writer James Halliday as a ‘Wily Old Fox’, James thenpromptly awarded Maverick with the highest possible rating of five stars in his annual Australian Wine Companion.  Halliday scored an incredible eight Maverick wines at 90/100 points or higher, four of them at over 95/100, Brown’s Maverick genie is definitely out of the bottle!

His phenomenal success in the world of wine has stirred up a few petty jealousies amongst the silver tails but,it has also managed to win him many more friends and admirers amongst the industries honest toilers and new entrants.  For Brown is no Midas, nor an overnight success, his current achievements are the culmination of a lifetime in the industry, most of that in Asia.

On his very first visit to Cambodia a scheduled hour meeting with the man mysteriously flashed into four, then dinner, then a very late night in the quiet corner of a bar drinking well and enjoying the exquisite art of conversation and a passion for all things wine.

Ronald Brown has lived in the ‘Far East’ for over 30 years, starting in Hong Kong and China with Jardine Matheson one of the original ‘Hongs’, (the company’s early revenues were derived from importing opium from India into China and William Jardine is credited with planning and successfully petitioning for the first Anglo-Chinese Opium war that led to the secession of Hong Kong in 1842).

Brown ran the Wine and Spirit desk for China and Japan, when global beverage giant Diagio purchased the business Ron struck out on his own in the Japanese market. Aside from his successful wine importation and brand management business,Ron Brown has gone on to establish a wine magazine, was founder of what is still perhaps Japan’s most renowned wine bar, Tastevin Aoyama and somehow found the time to also set up and chairs two prestigious wine shows, the Japan International Wine Challenge and the China International Wine Challenge.

Along the journey Ron also purchased his own vineyards in the South of France and created a series of events where the industry at large donates items for auction at gala dinners in Asia,the funds raised given tothe numerous charities Ron has supported over the years, (Refugees International, Save the Children, Seeing is Believing, Bird Life International and more).

In 2004, Brown saw the opportunity to fulfill a dream to own a winery in Australia, somehow managing to snap up several historic vineyards in the Barossa Valley with vines aged from fifty to over one hundred years. The wines to date have been nothing short of sensational.

In 2010, Ron decided it was time he set up his own charityWine into Water, in his own words, “The reasons for doing this were partly for transparency and partly so that we could be directly involved in doing good works. The link with water was an obvious one – not only do we need as you know 100 litres of water on average to make 1 litre of wine, not only are water and wine linked through the biblical miracle at Canna which we are trying to reverse, but generally wine lovers have access to funds of some description which are not available at all to the one billion people across the globe who do not have daily drinking water, so we decided that from 2011 onwards our funds would go into building wells around the world.

The plan is to raise money for about 100 wells in Cambodia and we are well on the way to achieving that goal. As you know, when we first met I had just come back from a visit to Pursat Province in Cambodia, visiting many families, some of whom were already benefiting from well water, others of whom were eagerly awaiting the opportunity to have their own well. I came away duly humbled and more determined than ever to keep going.

Initially, we have established a partnership with Hope International Development Agency, who have their own infrastructure in Cambodia. The local director can be contacted on email: [email protected].

We are continuing with continuing with family/site selection process and with implementation. One well can meet the requirements of four families for 20 years – this saves literally hours each day spent finding water which is often of totally substandard quality. The experience in Cambodia of families which have received wells demonstrates conclusively that this not only restores pride, purpose and fulfillment to these families, but on a very material level allows them to put together their often shattered and impoverished lives, finding success and happiness in the process”.