Catalina Sounds celebrates the 100th anniversary of the birth of Sir Edmund Hillary, the first man to conquer Everest, a Catalina navigator in the Pacific during WWII and a genuine New Zealand hero.

“It is not the mountain we conquer, but ourselves.”

This year 2019, New Zealand is celebrating the centennial of the birth of perhaps it’s greatest hero, Sir Edmund Hillary, mountaineer, explorer, and philanthropist, who, on 29 May 1953, along with Nepalese Sherpa Tenzing Norgay became the first climbers to conquer the world’s highest peak, Mount Everest.

It is incredible to think that just 16 years after man first climbed to the highest peak on earth, it would see a man set foot on the moon.  20th July 2019, Sir Hillary’s birthday also marks the 50th Anniversary of this monumental event in human accomplishment.

“I will come again & conquer you because as a mountain you cannot grow, but as a human, I can”

In 1951, Hillary was part of a British reconnaissance expedition to Everest led by Eric Shipton that never summited. Shipton was replaced as expedition leader by Colonel John Hunt for the successful 1953 summit attempt. Hillary, who was truly one of the world’s great adventurer/explorers would go on to climb ten other peaks in the Himalayas in 1956, 1960–1961, and 1963–1965 and also reached the South Pole as part of the Commonwealth Trans-Antarctic Expedition 1955-1958.

In 1960, Hillary organized an expedition to search for the fabled abominable snowman, he stayed with the expedition for five of its ten long months. As part of that expedition he traveled to remote temples said to contain ‘Yeti’ scalps and other relics that would prove its existence. No evidence of Yetis was found, instead footprints and tracks were proven to be from other causes and after bringing back three relics, two were shown to be from bears and one from a goat or antelope. Hillary said after the expedition: “The yeti is not a strange, superhuman creature as has been imagined. We have found rational explanations for most yeti phenomena”.

In 1977, he led a boat expedition, titled “Ocean to Sky”, from the mouth of the Ganges River to its source. In 1985, he accompanied the first man to walk on the moon, Neil Armstrong in a small twin-engine ski plane over the Arctic Ocean and landed at the North Pole. Hillary thus became the first man to stand at both poles and on the summit of Everest. This accomplishment inspired generations of explorers to compete over what later was defined as the ‘Three Poles Challenge’. 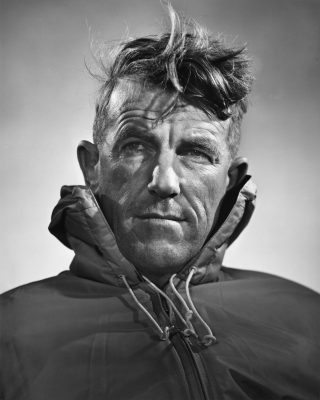 “I don’t know if I particularly want to be remembered for anything. I have enjoyed great satisfaction from my climb of Everest and my trips to the poles. But there’s no doubt, either, that my most worthwhile things have been the building of schools and medical clinics. That has given me more satisfaction than a footprint on a mountain.”

Following his ascent of Everest, Hillary devoted himself to assisting the Sherpa people of Nepal through the Himalayan Trust, which he established in 1960 and led until his death in 2008. His efforts are credited with the construction of many schools and hospitals in this remote region of the Himalayas.

Edmund Hillary did not regard himself as an explorer or a humanitarian professional. He was a bee-keeper, and he was an adventurer. Hillary was not just a practitioner of adventure, he also advocated for it as a necessary exercise of the human spirit. 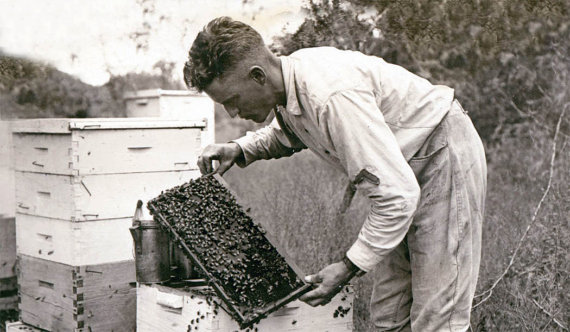 Edmund Percival Hillary was born in Auckland, his father Percy had served at Gallipoli in the 15th, North Auckland, Regiment. His family moved to Tuakau, in 1920, after Percy was allocated eight acres of land there as a returned soldier. He had been a journalist before the war and soon became founding editor of the Tuakau District Newspaper and an apiarist, (beekeeper). Edmund became interested in climbing at the age of sixteen after a school trip to Mount Ruapehu, after which it was said he showed more interest in tramping than in his studies and stated that “wanted to see the world”.

At the outbreak of World War II, with the Japanese threat in the Pacific, Hillary joined the RNZAF as a navigator in No. 6 Squadron RNZAF and later No. 5 Squadron RNZAF on Catalina flying boats. These were the very flying ships that Catalina Sounds was to be named after in their Honor.

No. 5 Squadron RNZAF is a squadron of the Royal New Zealand Air Force formed during November 1941 in Fiji. It remains on active duty. From the outbreak of hostilities with Japan, the Squadron operated the Short Singapore Mk. IIIs, (transferred in October 1941 from No. 205 Squadron RAF). The Short Singapore was a British multi-engine biplane flying boat built after the First World War. The design was developed into a four-engine versions and this became the Royal Air Force’s main long-range maritime patrol flying boat of the 1930s. 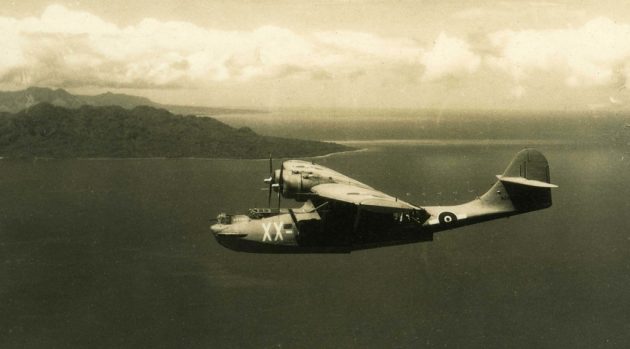 The Consolidated PBY Catalina, was an American built flying boat, and later an amphibious aircraft of the 1930s and 1940s produced by Consolidated Aircraft. It was one of the most widely used seaplanes of World War II. Catalinas served with every branch of the United States Armed Forces and in the air forces and navies of many other nations, (including New Zealand). During World War II, PBYs were used in anti-submarine warfare, patrol bombing, convoy escort, search and rescue missions (especially air-sea rescue), and cargo transport. The PBY was the most numerous aircraft of its kind, and the last military PBYs served until the 1980s. Some 80 years after its first flight, the aircraft continues to fly, primarily as a water-bomber in aerial firefighting operations in some parts of the world. 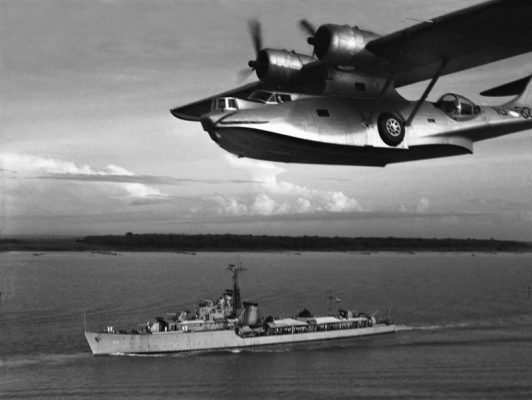 Although slow and ungainly, Catalinas distinguished themselves in World War II in which they saved the lives of thousands of aircrew downed over water.

“…There is something about building up a comradeship — that I still believe is the greatest of all feats — and sharing in the dangers with your company of peers. It’s the intense effort, the giving of everything you’ve got. It’s really a very pleasant sensation.”

Hillary reached the summit first, as Tenzing himself stated in an autobiography as early as 1955. However, Hillary insisted that this was a minor detail of no importance, and that the achievement belonged equally to them both. Hillary himself refused for years to claim the title of first man to set foot on the summit of Everest – even when the King of Nepal announced that Tenzing had reached the summit before him.

The two men spent a quarter of an hour at the peak. Turning to shake Tenzing’s hand, Hillary was enveloped in a bear hug and later noted: “with a feeling of mild surprise I realized that Tenzing was perhaps more excited at our success than I was”.

Hillary remained resolute and restrained; “Having paid my respects to the highest mountain in the world,” he recalled in his autobiography View from the Summit (1999), “I had no choice but to urinate on it.”

He took a photo of Tenzing’s but did not bother take one of himself; I didn’t worry about getting Tenzing to take a photograph of me — as far as I knew, he had never taken a photograph before, and the summit of Everest was hardly the place to show him how.

When he met expedition companion and fellow New Zealander George Lowe at Camp VIII on the descent, he delivered the news of their success in typically laconic fashion, “Well, George, we knocked the bastard off.” 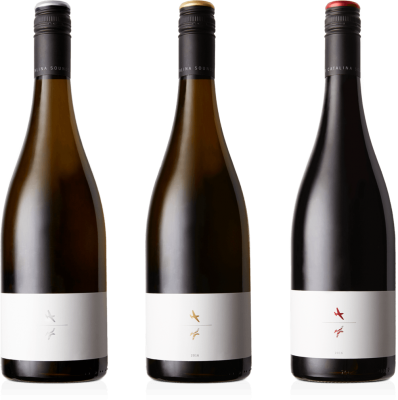 Marlborough is the most renowned wine region in New Zealand, producing the world’s most famous Sauvignon Blanc. It also has a well-earned reputation for other cool-climate varietal wines of exceptional quality, namely from Pinot Noir, Pinot Gris, Riesling and Chardonnay. The east coastal aspect bestows cooling sea breezes on the region, whilst the protective mountains shield vineyards from the extremes of rain and wind.

The combination of cool temperatures, lots clear sky and sunshine, low rainfall and free-draining, moderately fertile soils produce uniquely vivid wines. The local Maori population referred to the Wairau Valley in Marlborough as ‘Kei puta te Wairau’ – ‘The place with the hole in the cloud’.

One of the keys to Marlborough’s success is its ancient, glacial, free-draining soils. The extensive, inter-woven river systems have deposited a legacy of stony, sandy loams over deep gravels. Rapaura is the stoniest; the lower Wairau has more loam and higher water retention. Clay is prevalent in the southern valleys, assisting Pinot Noir. While the Awatere is more fragmented, with gravelly silt-loams and wind-blown loess.

Wrapped around the surrounding hills the Omaka, Fairhall, Brancott, Ben Morvan and Waihopai Valleys make up the important sub-region known as the Southern Valleys. Soils and meso-climates vary, but tend to contain more clay than Wairau. It is cooler and drier further south into the valleys and a broad range of varieties are grown according to the merits of each individual site, the wines here have magnificent aromatics and the sub-region is renowned for its exceptional Pinot Noir.

Catalina Sounds’ journey began in 2005 with a vision to create the Marlborough region’s finest wines, using a minimal intervention philosophy that allows the wines to give full expression their unique combination of site, region and variety.

Planted on the terraces of the Waihopai River, in stony, free-draining soils blended with top-soils of a clay content over underlying river gravels, here you will find the ‘Sound of White’ vineyard. When it snows you hear nothing. It is white on white. Fourteen years ago, this land was a blank canvas. A peaceful remote haven in the snowy shadows of the majestic Waihopai Ranges.

The Sound of White Vineyard is a specific site of exceptional viticultural attributes and conditions that allow for the creation of wine-grapes of a rare and unique quality; this is the home of Catalina Sounds.

The Sound of White, single vineyard reserve label is the bedrock of Catalina Sounds wines, producing some of the very best Pinot Noir, Sauvignon Blanc and Chardonnay that Marlborough has to offer, its label depicts a Catalina seaplane in flight with its reflection on the waters of Marlborough Sounds. 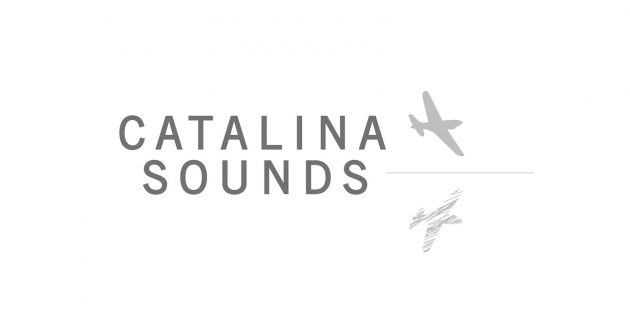