When the sun rose there was a white fog, very warm and clammy, and more blinding than the night. It did not shift or drive; it was just there, standing all round you like something solid. At eight or nine, perhaps, it lifted as a shutter lifts. We had a glimpse of the towering multitude of trees, of the immense matted jungle, with the blazing little ball of the sun hanging over it–all perfectly still–and then the white shutter came down again, smoothly, as if sliding in greased grooves.

I ordered the chain, which we had begun to heave in, to be paid out again. Before it stopped running with a muffled rattle, a cry, a very loud cry, as of infinite desolation, soared slowly in the opaque air. It ceased. A complaining clamour, modulated in savage discords, filled our ears. The sheer unexpectedness of it made my hair stir under my cap. I don’t know how it struck the others: to me it seemed as though the mist itself had screamed, so suddenly, and apparently from all sides at once, did this tumultuous and mournful uproar arise. It culminated in a hurried outbreak of almost intolerably excessive shrieking, which stopped short, leaving us stiffened in a variety of silly attitudes, and obstinately listening to the nearly as appalling and excessive silence.

`Good God! What is the meaning–‘ stammered at my elbow one of the pilgrims– a little fat man, with sandy hair and red whiskers, who wore side-spring boots, and pink pyjamas tucked into his socks. Two others remained open-mouthed a while minute, then dashed into the little cabin, to rush out incontinently and stand darting scared glances, with Winchesters at `ready’ in their hands.

What we could see was just the steamer we were on, her outlines blurred as though she had been on the point of dissolving, and a misty strip of water, perhaps two feet broad, around her– and that was all. The rest of the world was nowhere, as far as our eyes and ears were concerned. Just nowhere. Gone, disappeared; swept off without leaving a whisper or a shadow behind.

The Italian region of Veneto was an independent state for over a millennium, the capital, Venice, was one of the largest and richest maritime republics and trade empires in the world. The region’s second largest city, Verona is the setting for no less than three works by Shakespeare, ‘Romeo and Juliet’, ‘The Taming of the Shrew’ and ‘The Two Gentleman of Verona’. Dante Alighieri wrote the third installment, (Paradiso) of his great masterpiece ‘Divine Comedy’ whilst in exile here. Dante, also wrote about the great ‘palio’ of Verona in the first installment, (Inferno).

Bordered by Lake Garda and the Adriatic Sea to the west and east and by the foothills of the Dolomites and the Alps to the north, the cool winters here remain humid. East of Lake Garda lies the vineyards and marble quarries of Valpolicella. The fog rolls in at dusk and remains until late morning, a fog thick enough to halt time, “As phantoms frighten beasts when shadows fall”, as Dante wrote in ‘Inferno’.

Here inside the mist, magic happens; Conrad informs us, “It is not the clear-sighted who rule the world. Great achievements are accomplished in a blessed, warm fog”. For it is here you will find one of the most majestic and bewitching wines in all Italy, under this rolling blanket of fog, the Venetian’s produce the astonishing red wine known as ‘Amarone’, (the great bitter).

The incredibly rich and complex characters of this wine are achieved using an ancient method known as ‘appassimento’. The wine is made up of several indigenous grape varieties, Corvina, (usually at least 60%) Rondinella, and Molinara, the blend may also include splashes of minor varieties such as Oseleta, Negrara, Forsellina and Pelara. The grapes are picked late and very ripe and then laid out on straw mats where they will slowly dry, shrivel and ‘raisin’, under the protection of the fog, a process that may last up to 120 days.

O, how this spring of love resembleth

The uncertain glory of an April day,

Which now shows all the beauty of the sun,

And by and by a cloud takes all away!

This process reduces the water in the grape, thus concentrating the sugars and flavours. Grape skin quality is a primary concern as it brings tannin, color and intensity to the wine. The process of desiccation not only concentrates the juices within the grape but also increases skin contact. The drying process further metabolizes the acids within the grape and creates a polymerization of the tannins in the skin which contribute to the overall balance of the wine.

Most wines undergo an extended maceration on the skins, just to make sure that all of the complexities and goodness from the shriveled skins ends up in the wine. Then the wines are matured in oak for at least two years for ‘normale’ Amarone and four years for Riserva.

“Love is a smoke made with the fume of sighs.”

Amarone wines have an incredible vibrancy and concentration of fruit and flavours, yet can also have impeccable balance, which gives them a certain elegance. The powerful fruit is also balanced by good acidity and very fine but firm tannins. Majestic yet with a certain rural charm comes to mind as a means to describe these remarkable wines. 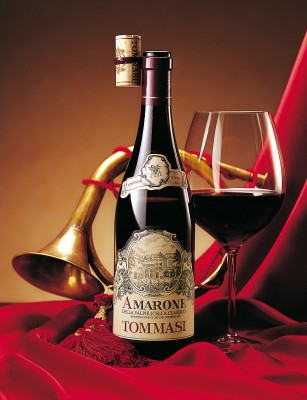