‘To become truly great, one has to stand with people, not above them.’

Graves is the region that established Bordeaux; cultivated grape vines were first planted in its famous gravel soils by the Romans. Graves’ wines were being exported to England as early as the 12th century, Château Pape Clément, founded at the turn of the 14th century by the future Pope Clement V, was the first named chateaux in all of Bordeaux and on the 10th of April 1633 Samuel Pepys records in his now famous diary drinking ‘Haut Brion’, still the region’s most famous red wine. The noble houses of Luchey and of Saint-Angel (the name previously given to Halde) appear on the regional map drawn up by Cassini in 1760.

Today on Bordeaux’s’ Left Bank, the most famous wines come from the Medoc and in particular the sub-regions of Pauillac, Margaux, Saint Estephe and Saint Julien; whilst Graves is slowly being engulfed by the suburban sprawl of the city of Bordeaux itself. However, in the scheme of things this is all quite new; for much of Bordeaux’s history, Graves was alone as the producer of great, full bodied, Bordeaux red wines, carving a reputation that the others would eventually get to follow.

When an historical marriage was arranged between England’s Henry the 2nd and Eleanor of Aquitaine in 1152, it was the commercial potential of the farmland that Henry II had his eye on. Soon wines known as ‘Claret’ were being exported to England. Throughout the middle ages Graves wine alone would become famous for its full bodied, elegant style wines, the only wines of their type in France and probably anywhere in the world.

By the early 1700’s small vineyard plantings had popped up in on the Right Bank at Saint Emillion and Pommerol and over the ensuing decades the Dutch drained the swamp land that is now the Medoc and vine cultivation in the region could begin. By the time of the 1855 Classification of Bordeaux Chateaux, it was the Medoc that dominated with four of the five first growth classifications for red wine; Graves had only one, (Chateau Haut Brion).  It is worth noting that all of the sweet wines of the 1855 classification were from Sauternes, which is a sub-region of Graves.

Graves was also the family home of Charles-Louis de Secondat, Baron de La Brède et de Montesquieu, (1689 –1755), better known as simply Montesquieu, the famous social commentator, philosopher, political thinker, man of letters and vigneron. He is considered one of the greatest thinkers of the enlightenment movement in philosophy and his great works are considered to have formed the foundation of the United States constitution. The U.S. founding fathers are recorded as regularly quoting his works as the basis of their arguments in drafting the original document. Indeed, today his thoughts and works on the separation of powers are incorporated into the constitutions of many nations throughout the world.

Montesquieu had a great passion for Bordeaux and its wines; he is credited by some as being the first person to identify the Cabernet Sauvignon grape variety, today the foundation variety of the Left Bank’s reputation and success. What is certain is that he took a great deal of interest and pride in the wines of his beloved Graves, was an active participant in the politics of the region and was a defender of the interests of vineyard holders and active in pursuing improved quality measures in wine production.

-Quite attached to the family castle of La Brède, Montesquieu regularly stayed here. He found, in this peaceful setting, the happiness of a simple lifestyle and an environment that stimulated his reflection and writing. Montesquieu spent many hours in his room, where he edited part of his text “The Spirit of the Laws” (l’Esprit de Lois), and in the library. This 216 square meter vaulted room holds several thousand works from Montesquieu’s era.

“O rus quando te aspiciam” (Oh countryside, when will I see you again), such was Montesquieu’s desire to return to the domain which was so dear to him. Montesquieu had this quotation from Horace engraved above the first doorway allowing access to the castle and “Deliciae domini” “The delights of the master” above the second doorway.

Montesquieu devotes himself to the exploration of his lands and more specifically of his viticulture properties. He loves to wander the vines, see the grapes grow and ripen, and he remains quite attentive to the evolution of his production, which is an important source of income.

Quite attached to his domain, Montesquieu takes effort to protect it from poaching and to embellish it. Inspired by the English gardens he discovered during his voyages, Montesquieu decides to layout an English style park around the castle. In one of his letters, he relates to his friend the Abbey Guasco: “Wouldn’t you like to see […] the castle of La Brède, that I have so greatly remodeled since you have last seen it? It is the finest rural space that I know.-“

A classification of Graves wine was carried out in 1953 for its red wine producers. Dry white wines were included in an updated 1959 classification.  The Graves wine region sits on the left bank of the Garonne river, in the upstream part of the region, now being encircled by the southeast sprawl of the city of Bordeaux. Graves is the only Bordeaux sub-region recognized for all three of Bordeaux’ main wine styles: dry red, dry white and sweet wine. The area encompasses the villages of: Sauternes, Pessac, Talence, Léognan, Martillac, Saint-Morillon, and Portets.

The name Graves is derived from the intensely gravelly soils. The soil is the result of glaciers from the Ice Age, which also left white quartz deposits that can still be found in the soils of the top winemaking estates.

The region’s climate is milder than that to the north of the city and harvest occurs up to two weeks earlier.

Where the wines of the Medoc contain mostly Cabernet Sauvignon with small additions of the other noble red varieties of the region, (Merlot, Cabernet Franc, occasionally Petit Verdot and more infrequently, Malbec), the wines of Graves are typically a blend of even amounts of Cabernet Sauvignon and Merlot with small additions of some of the other noble varieties (usually Cabernet Franc and occasionally some Petit Verdot).

In 1987, the part of Graves containing most of the producers on the best soils and of its most famous wines, situated closest to the city Bordeaux itself, created a separate AOC under the name Pessac-Léognan. This has had the effect of devaluing the name and price of wines simply labeled with the Graves appellation.

The region’s best wines are rich and powerful with a core of ripe and complex fruit showing great depth and layers, the tannins are firm and long and the wine is laced with subtle nuances of tobacco, leather, spice and earthy notes. They are typically long lived wines that need time and patience to be truly enjoyed at their best. 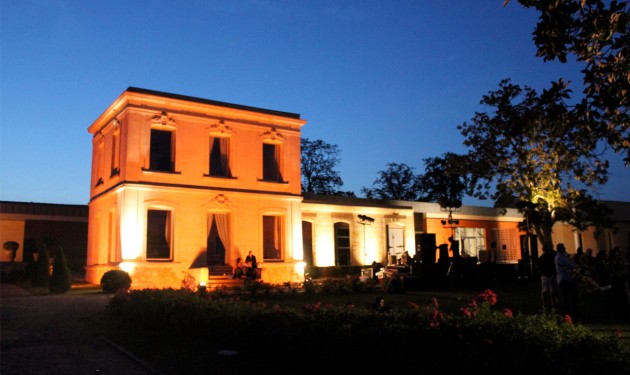 Château Luchey-Halde is located in greater Bordeaux, within the prestigious appellation Pessac-Léognan. Over the centuries, the high quality of this terroir and the reputation for excellence of Graves wines shielded both Luchey and Halde holdings from being turned over to non-viticultural uses. Situated in a vineyard enclave on the outskirts of the city of Bordeaux the land was eventually taken over by the French Army in 1917 for use as a military camp.

The properties were acquired by the Ecole Nationale Supérieure des Sciences Agronomiques de Bordeaux-Aquitaine in 1999 and their first wines were released in 2002. The new owners have shown a steadfast commitment to an investment in quality in both the vineyard and the winery and the results so far speak for themselves.